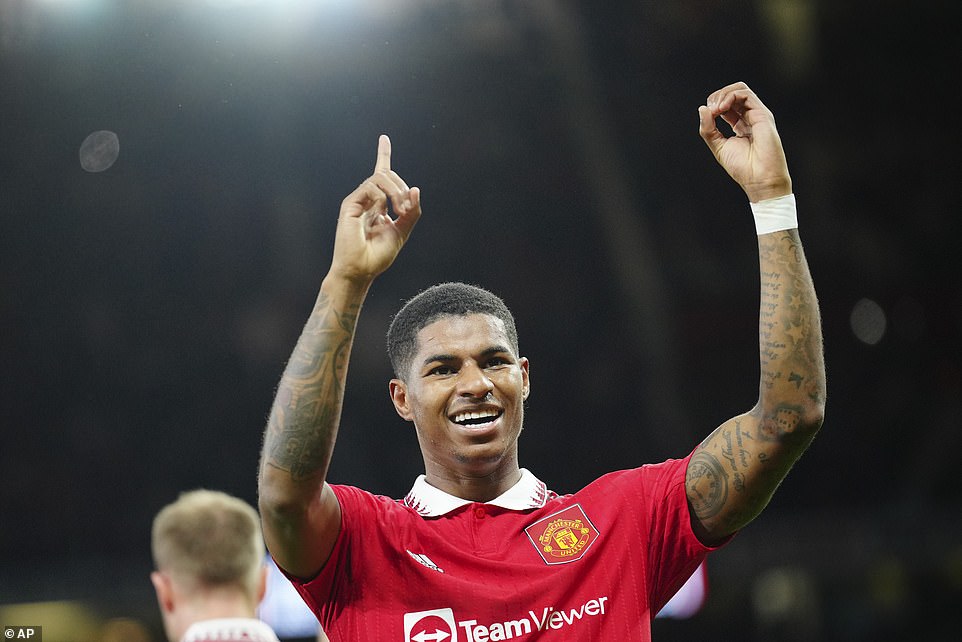 There was a time, maybe five years ago, when we presumed we would spent a good chunk of the next decade watching Marcus Rashford doing things like this. Scoring memorable goals, winning football matches.

It hasn’t quite worked out like that. Manchester United’s aimless drift during the post-Sir Alex Ferguson era has not helped him. Nor has a revolving door of managers at Old Trafford. There is also another theory. Maybe Rashford was never quite as good as we hoped and presumed.

Whatever the case, there may be the seeds of a recovery growing this autumn. On the modest and under-stated watch of coach Erik Ten Hag, Rashford is scoring important goals again and here, with England manager Gareth Southgate watching, he contributed one of sheer and brutal beauty. 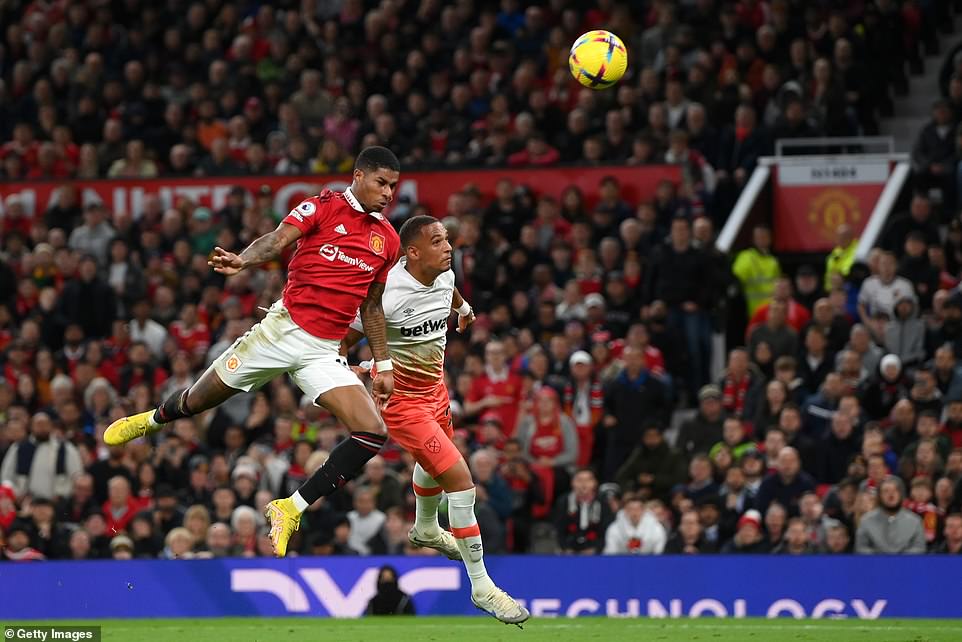 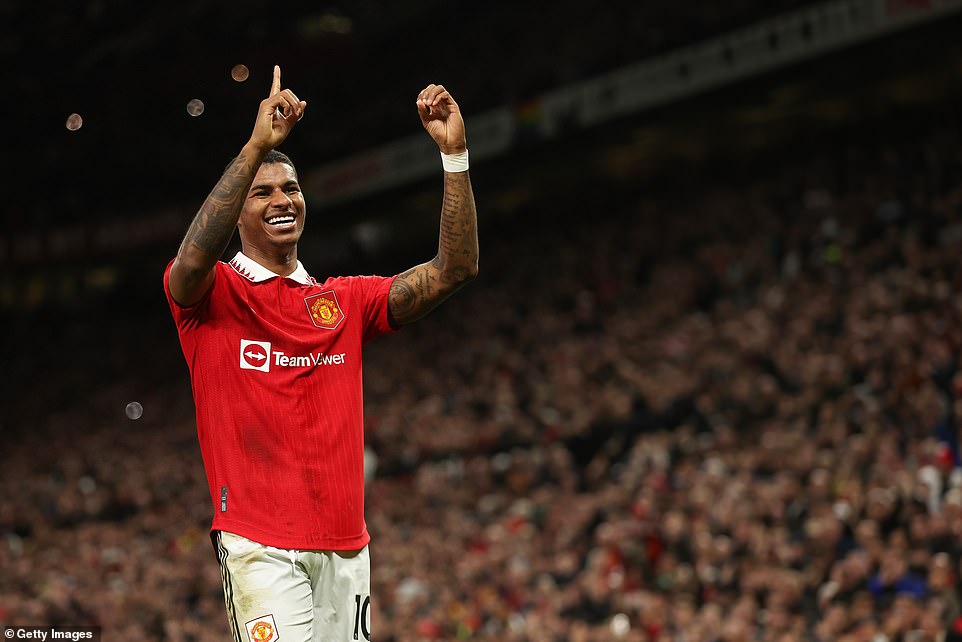 The cross from Christian Eriksen towards the end of the first half was perfect. Like a golfer clipping a pitching wedge off the turf, no divot taken.

But the manner in which Rashford thundered in to overpower West Ham defender Thilo Kehrer and crash a header in to the roof of the net was magnificent.

In a game that West Ham deserved something from on the back of a terrific second half performance, it ultimately made the difference.

Southgate will have been impressed with one or two here at Old Trafford. Declan Rice was fabulous for West Ham, running the game for the final hour.

Harry Maguire came through a big afternoon too. While Southgate and everybody else will have watched United goalkeeper David de Gea repel West Ham almost on his own in the final ten minutes and wondered how on earth he has not made Spain’s provisional 55-man squad for the World Cup.

But Rashford is easing in to some form for United now. Southgate had pretty much written him out of his plans for Qatar by the end of last season and said so.

But the 24-year-old has given his international manager something to think about at least. This was Rashford’s 100th goal for his club and already this season he has scored against Liverpool and Arsenal. So not just goals but big goals. There is a difference.

For Ten Hag, this was another big win. His team were not at their best, not reaching anywhere near the levels they did in beating Spurs here for example. But there is a resilience about United that has not been evident for quite some time and that was enough to get them through.

The better team for the first half an hour, United were not from that point on. West Ham coughed up too much possession in the early stages but once they fixed that, they were able to impose themselves on a United that lost control of the rhythm of the contest.

For a while United kept West Ham at arm’s length. But the introduction of Michail Antonio as a replacement for the utterly ineffectual Gianluca Scamacca gave David Moyes’ team an impetus and a focal point and for the last ten minutes in particular only De Gea stood between them and the goal they deserved.

The save he produced to touch over a long range drive from Antonio with eight minutes of normal time to play was pretty standard. The one he found to paw a Kurt Zouma header round the post a minute later was not. And then, three minutes in to the added period, arrived the best of the lot. Rice’s strike from 30 yards was so pure and so true that it seemed it had to fly in to De Gea’s top left hand corner. But again, it did not. De Gea saw to that. 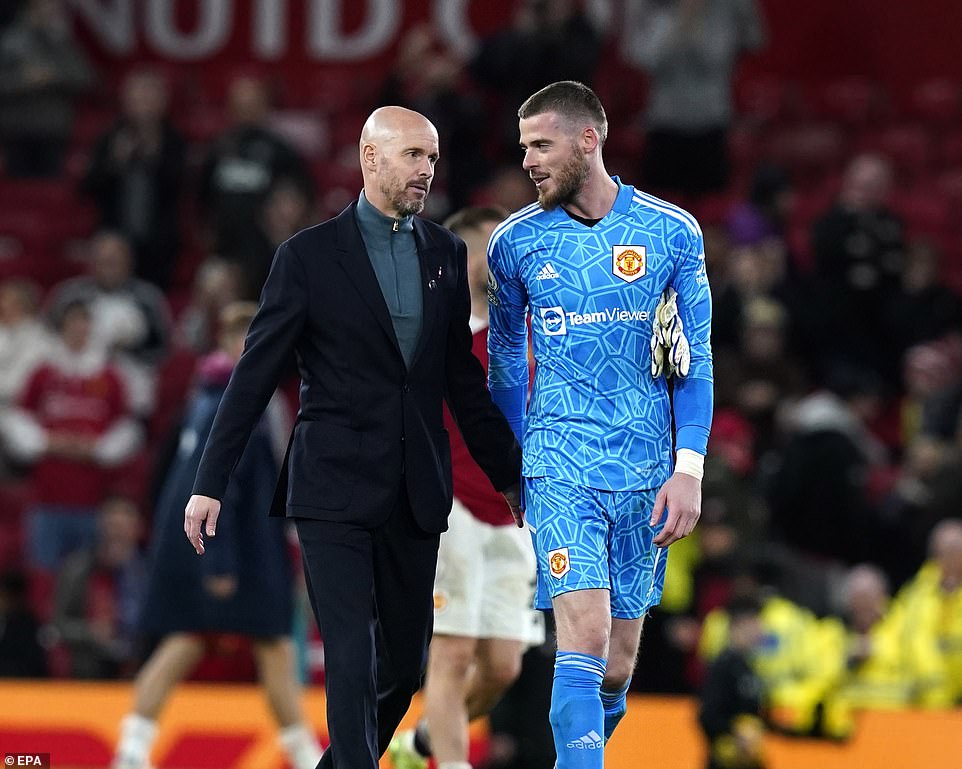 David De Gea’s goalkeeping was critical in keeping West Ham at bay, as the Hammers kept pushing until the final whistle 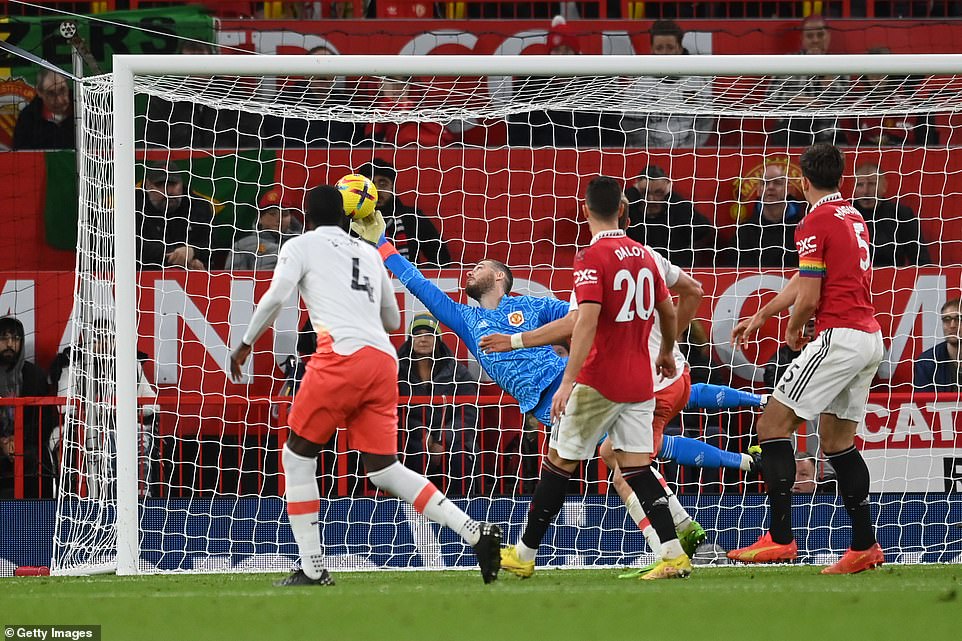 DThe Spanish goalkeeper was required to keep West Ham out, such as with this stretching save to deny Kurt Zouma’s header 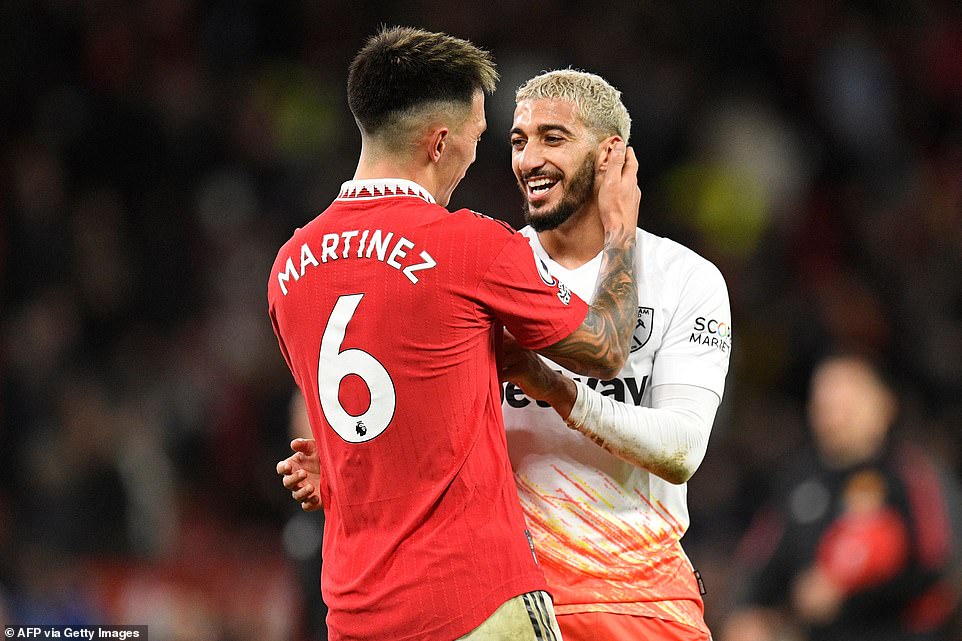 Said Benrahma was the most inventive player for the visitors during the first half, seen here with Lisandro Martinez

Throw in a clear close range chance fluffed by Jarrod Bowen just before that final effort and it’s clear just strong was the West Ham push for parity late on. Moyes does not have the best managerial record against what you may call the big teams but the Scot was unfortunate to lose out here.

United’s defending has improved with the level of their all round play. Maguire will be glad to have got this game out of the way while right-back Diogo Dalot continues to make rapid progress. Sometimes it’s the unfussy stuff that marks a good defender out and twice in the second half he stayed strong to head dangerous crosses away from the arriving Antonio and in doing so probably saved two goals. Had West Ham’s Kehrer been as aware and as strong in the first half, Rashford may never have had his chance to score.

United were not without a threat themselves. Indeed the Brazilian Fred hit the post with a late header. Had that gone in, De Gea could have taken his gloves off. 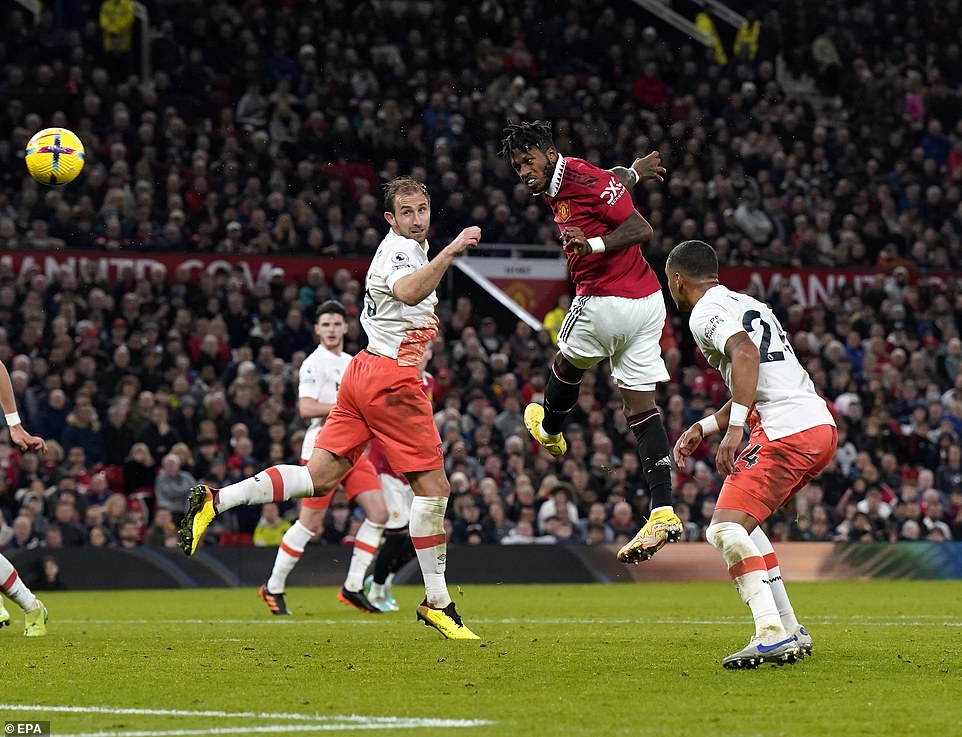 Fred hit the post with a header late on, which was a golden opportunity for the hosts to seal the three points 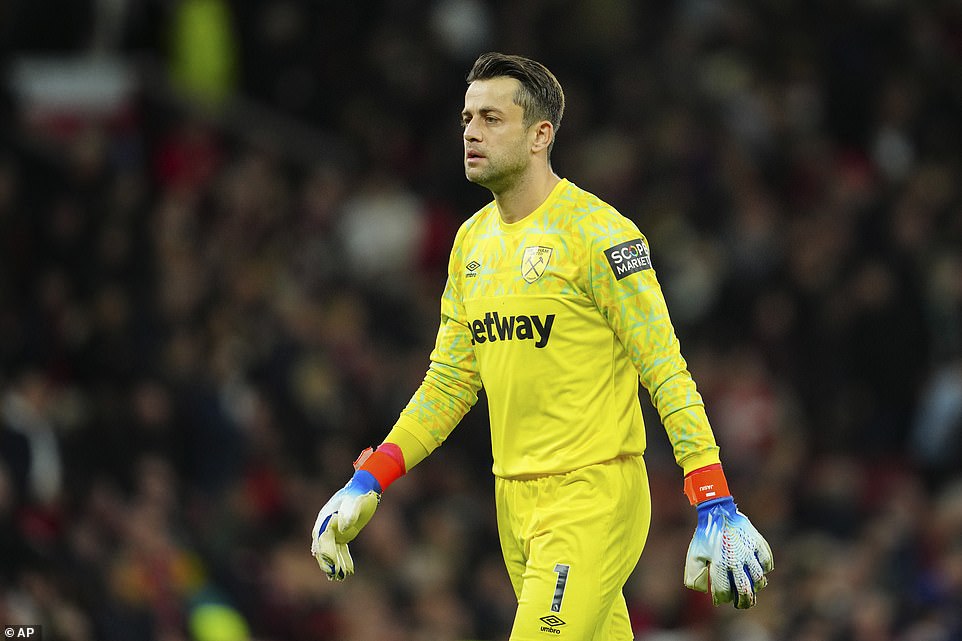 Lukasz Fabianski was injured during the first half, and was taken off at the break, but he made several important stops

There was also an earlier Rashford header saved with the score at 0-0 while the same player also drove in to the penalty area from his position on the left side to shoot low. That one was deflected over by West Ham’s Tomas Soucek while a similar play in the second period culminated in a right foot shot that curled wide of the far post and in to the Stretford End.

Rashford was booed on occasion here last season as United faltered first under Ole Gunnar Solskjaer and then Ralf Rangnick. Confidence does wonders for a footballer, though, and Southgate will have headed for his car last night knowing he had just watched a player finding a little of his true self once more. 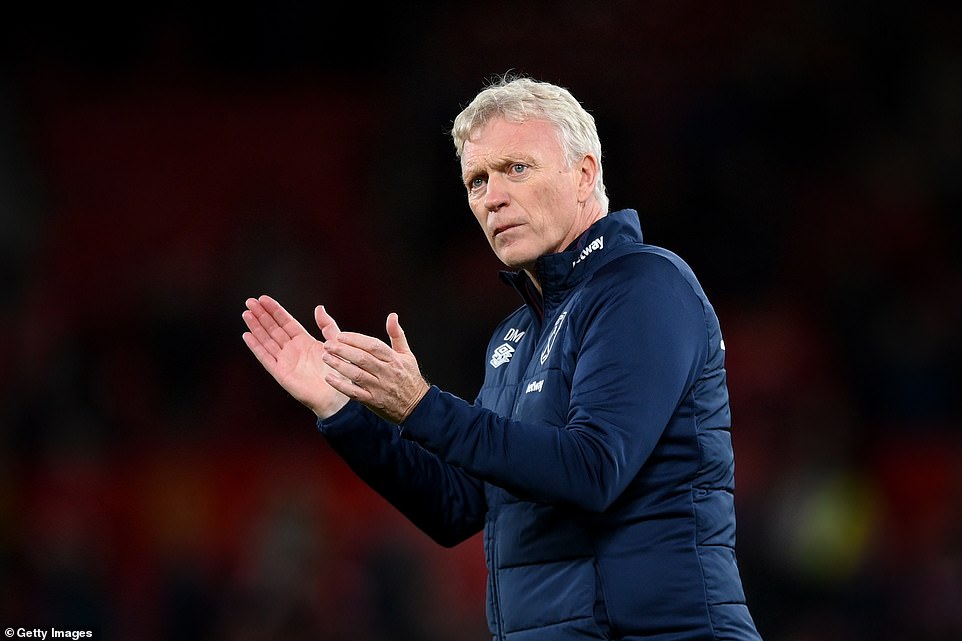 David Moyes saw lots of positive play from West Ham, but was unable to get his first win as a visiting manager at Old Trafford 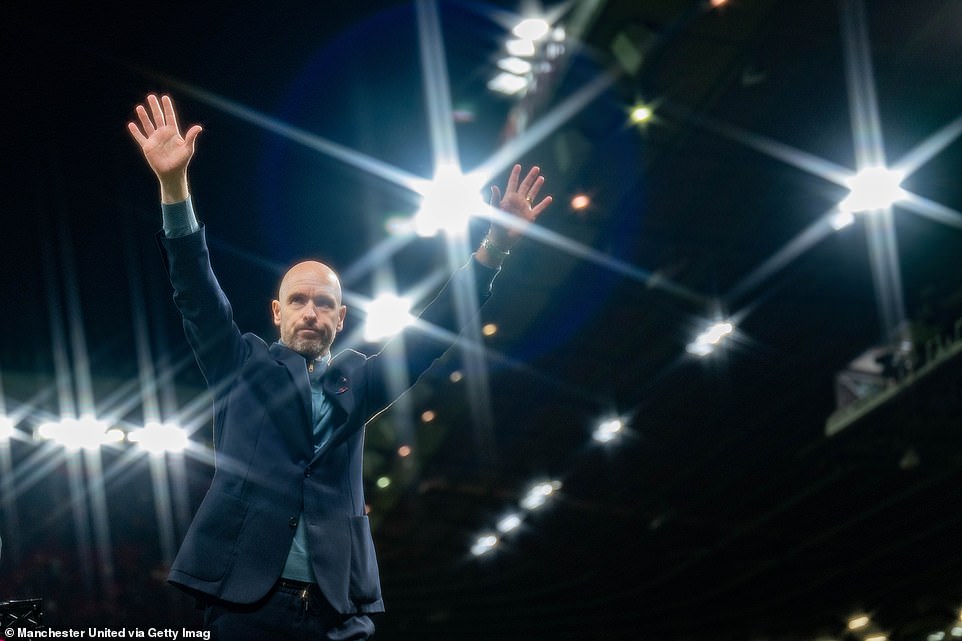 Read how Sportsmail’s Samuel Draper covered the action during the live blog for the Premier League clash beteen Manchester United and West Ham.