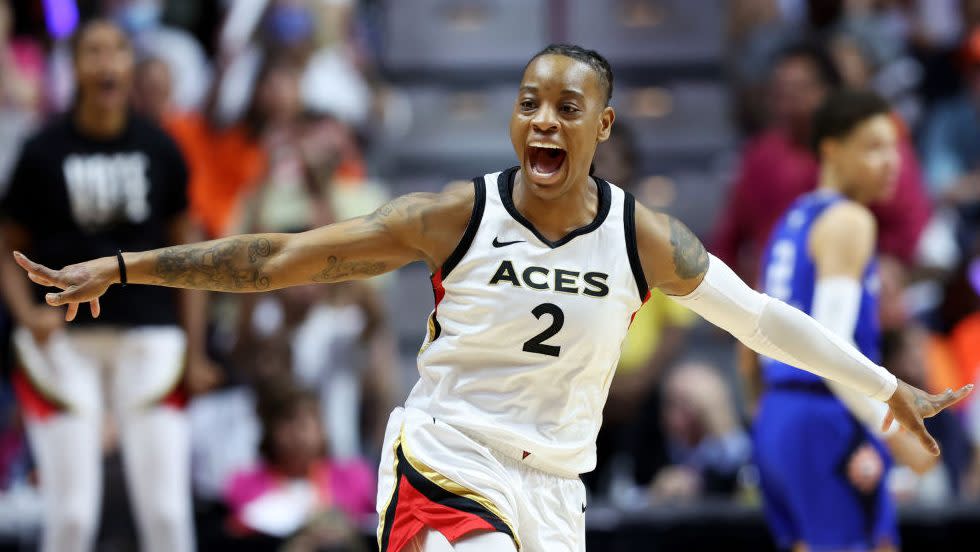 The Las Vegas Aces entered these playoffs with much to prove.

Sunday afternoon the Aces proved all that and more — that the Aces organization is changing the level of the WNBA game.

“They’re just big-time players, they love big moments, and that’s nothing I can teach,” Hammon said as the Aces accepted the title trophy. “It’s in their DNA. It’s who they are.”

For the second time in these Finals, Las Vegas won a game played in Connecticut’s style — physical, defensive, low scoring and grinding. The Aces had one of the best offenses in WNBA history this season, and the Sun defense ground it down.

Yet the Aces still came out with the win — 78-71, taking the WNBA title with a 3-1 series win over the Sun. And on the home court of the Sun.

Gray was named Finals MVP after putting up 20 in the win.

What won Las Vegas the title was not only a depth of talent but also a commitment to playing together that Hammon had emphasized from the moment she walked in the door.

The Aces proved that depth matters — when they needed a bucket late in the fourth quarter it was not their biggest names but 18-minute-a-night bench player Riquna Williams who was draining threes on her way to a personal 8-0 run that keyed the win.

Williams was in because Hammon trusted her Aces team to go small against a three bigs lineup from the Sun.

“Well, obviously we went small. I felt like if we could scrap and just dig out balls on the other end, that they would have a tough time guarding us down there,” Hammon said. “So it was kind of just whoever their biggest player was on, we were running them into pick-and-roll actions and then just kind of slipping out and making them pay.”

The Aces were an offensive juggernaut this season, but Hammon changed their defense by mixing things up. That goes back to her time under Gregg Popovich with the San Antonio Spurs.

“You know, we’ve tried different defense on Steph Curry Dame Lillard. I was like we can try stuff. If we can junk it up on them, we could junk it up on anybody,” Hammon said. “So it was just an idea to try to give people a different look just to mix it up.

“I think that the bigger thing is the players really bought into it. It doesn’t matter what scheme you’re doing. The players have to believe in it. And I think at the end of the day, they saw enough good results that you know, there was times where Chelsea’s call on the defense, junk defense. I’m not even putting us in junk. She’s putting us in junk. So it’s a fun way to play.”

Las Vegas was a fun team all season, and Aces owner Mark Davis — also the owner of the NFL’s Raiders — deserves credit for that. He is one of a new breed of WNBA owners willing to spend to make the product better — he gave Hammon a seven-figure contract to leave the NBA and coach his team. He is building them a new state-of-the-art practice facility (which should be open next season). He’s overseen a front office that put together the best roster in the WNBA.

Davis spent where he could and the results are the players have become stars and Sin City has embraced the team. He has built the kind of foundation free agent players will want to come be a part of.

And he has built a champion with nothing left to prove this season.

Check out more on the WNBA

Sun confident in defense, ability to take series despite Game 1 loss to Aces… A’ja Wilson’s 24 and 11 lifts Aces past Sun, Vegas takes Game 1 of… Sue Bird found her voice later in her career, just as WNBA found its voice