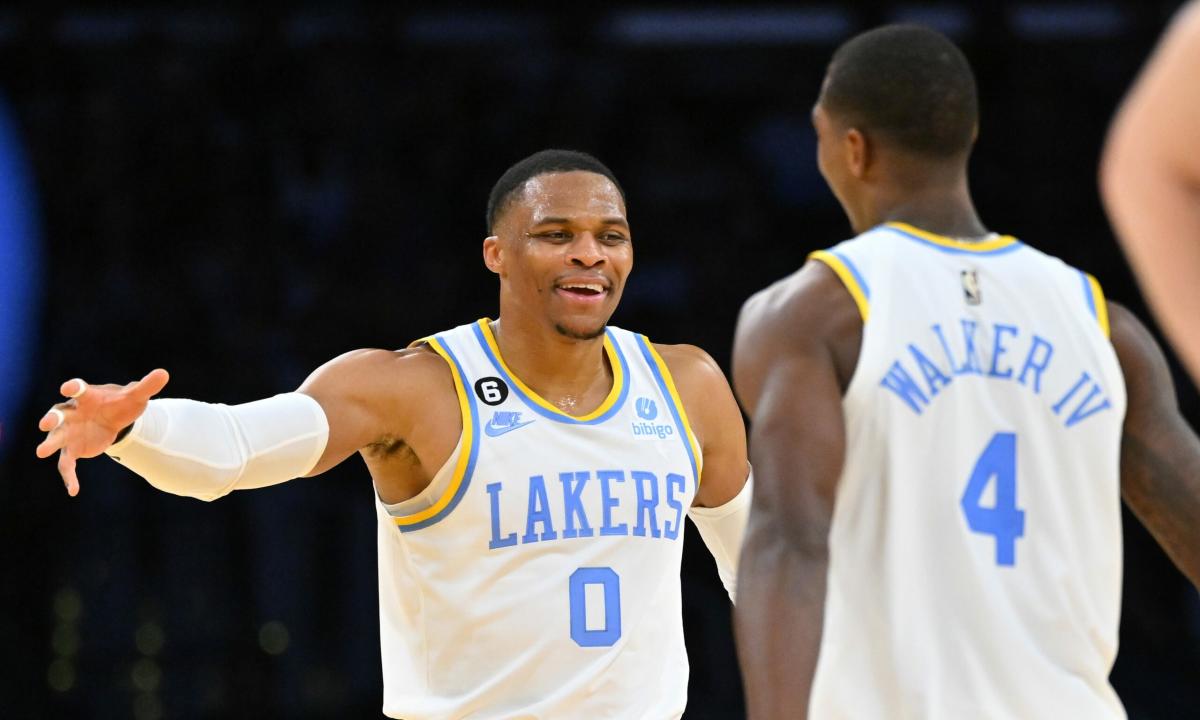 On Sunday evening, the Los Angeles Lakers finally looked like a legitimate NBA team, as they defeated the Denver Nuggets, 121-110.

They fell behind 28-19 in the first quarter, only to make a second-quarter rally to take a 55-51 lead at halftime. But when L.A. trailed 83-75 late in the third quarter, it looked like another loss was around the corner.

Instead, the team finished the period with an 18-2 run, and it held that momentum in the fourth quarter in order to come away with its first win of the season.

The biggest difference may have been the 3-point shot. The Lakers made an impressive 43.3 percent of their attempts from beyond the arc, and they shot a solid 47.9 percent overall. Five of their players hit at least two shots from downtown in an abrupt reversal from their historic struggle from that range in their first few games.

Davis missed Friday night’s loss to the Minnesota Timberwolves with lower back discomfort, but he played 37 minutes on Sunday and scored 23 points on 10-of-18 shooting while grabbing 15 rebounds and adding one steal and one blocked shot.

Despite not being 100 percent, he showed good energy and effort defensively and on the boards.

With just over two minutes left in the game, Davis appeared to aggravate his lower back ailment, but he waved off head coach Darvin Ham and remained in the contest.

Brown made another decent contribution by hitting 4-of-8 shots from the field to score eight points to go along with six rebounds in 26 minutes. He missed all three of his 3-point attempts after going 4-of-6 from downtown on Friday.

Beverley was quiet tonight, as he went 2-of-5 overall and 1-of-4 from downtown for five points, to go along with five rebounds and two assists in 21 minutes. But this is the type of production Lakers fans can expect from him, as his biggest contributions won’t necessarily show up on the stat sheet.

Walker did a good job of giving the Lakers a lift offensively, as he scored 18 points and went 3-of-5 from deep while also registering five rebounds, two assists, one steal and two blocked shots. His energy on both ends of the floor was noticeable.

He helped spark L.A.’s late third-quarter run by scoring 10 points in the final 3:07 of the period.

It wasn’t a super-efficient night for James, as he shot “just” 10-of-22 from the field, but he did just about everything else right. He finished with 26 points, six rebounds and eight assists while connecting on 2-of-5 attempts from 3-point land.

When the Nuggets tried to get themselves going to start the third quarter, James helped keep them at bay by scoring 10 points in the first 4:03 of the period.

Ryan played a dozen minutes and went 2-of-3 from downtown to give the Lakers some much-needed 3-point shooting during the run they made late in the third quarter and early in the fourth quarter.

Coming off the bench again, Westbrook played excellent and efficient ball. In 32 minutes, he shot 6-of-12 overall and 2-of-4 from downtown to finish with 18 points, eight rebounds and eight assists. He showed good discipline and decision-making, as he unquestionably was a positive asset for the team tonight.

In nine minutes, Gabriel was 2-of-4 from the floor for four points while grabbing two rebounds.

Reaves had 10 points, four rebounds, two assists, one steal and one block in 28 minutes. Perhaps the best thing he did was hit 2-of-4 shots from 3-point land, as the Lakers may be starting to heat up from the outside as a whole.

Nunn played just three minutes, during which he hit a 3-pointer, as Ham elected to go with extended minutes for Walker and Reaves.

Jones played just two minutes, and in that time he missed his only shot attempt while contributing a blocked shot.