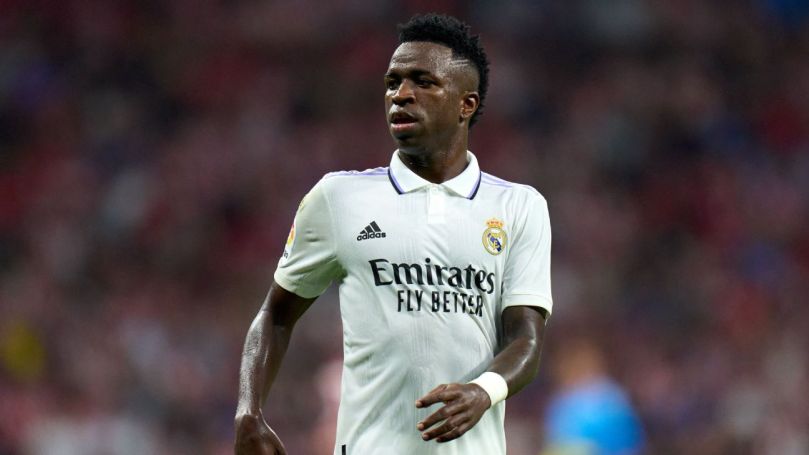 The club’s comments, which were echoed by LaLiga, come two days after hundreds of Atletico supporters could be heard singing, “Vinicius, you are a monkey, you are monkey” in a video published on social media by radio station Cope in the build-up to the Madrid derby, which Real won 2-1.

Local media also reported that monkey noises and chants of “Vinicius, die” were heard throughout the game.

“Atletico Madrid roundly condemns the inadmissible chants that a minority of fans made outside the stadium before the derby was held,” the club said in a statement on Tuesday.

See also  Memphis Depay destined for the Barcelona exit after torrid time - could he recover at Chelsea?

“Racism is one of the biggest scourges in our society and unfortunately the world of football and clubs are not free from its presence.

“Our club has always been characterised by being an open and inclusive space for fans of different nationalities, cultures, races and social classes and a few cannot tarnish the image of thousands and thousands of fans who support their team with passion and with respect for the rival.”

Pele, Neymar and other leading Brazilian figures leapt to the defence of 22-year-old Vinicius Jr on Friday after a panellist on a Spanish soccer show said the Brazilian was not respecting his opponents with his celebrations, comparing his behaviour to that of a monkey — which immediately sparked a backlash on social media as it was construed as racist.

Vinicius Jr published an emotional two-minute video statement on Friday in response to what he called a “xenophobic and racist” insult, saying he “won’t stop dancing” and that “the happiness of a black Brazilian being successful in Europe bothers” many people.

Real Madrid released a statement supporting their player and declaring they will take legal action against the panellist.

Atletico Madrid said they were collaborating with the authorities to identify the abusers, who will be banned by the club.

“These chants cause us enormous revulsion and indignation and we will not allow any individual to hide behind our colours to utter racist or xenophobic insults,” Atletico said in their statement.

“At Atletico we have zero tolerance against racism, our commitment to the fight against this social scourge is total and we will not stop until we eliminate it.

“For this we have contacted the authorities to offer them our maximum collaboration in the investigation of the events that occurred outside the stadium and demand the identification of the people who participated in order to proceed with the immediate expulsion of those who are members of the club.”

“Hate speech has no place in LaLiga and we always work with the clubs and the authorities to identify and bring to justice any such case,” LaLiga said.

See also  Arsenal: European sides, including PSG, 'are interested in a move for Pierre-Emerick Aubameyang'

“We denounce all incidents inside and outside stadiums and work with clubs to keep our football friendly and enjoyable.

“LaLiga always reports any incidents of hate speech or violence to the authorities and assists in the investigation. We will do the same with what happened on Sunday night.”