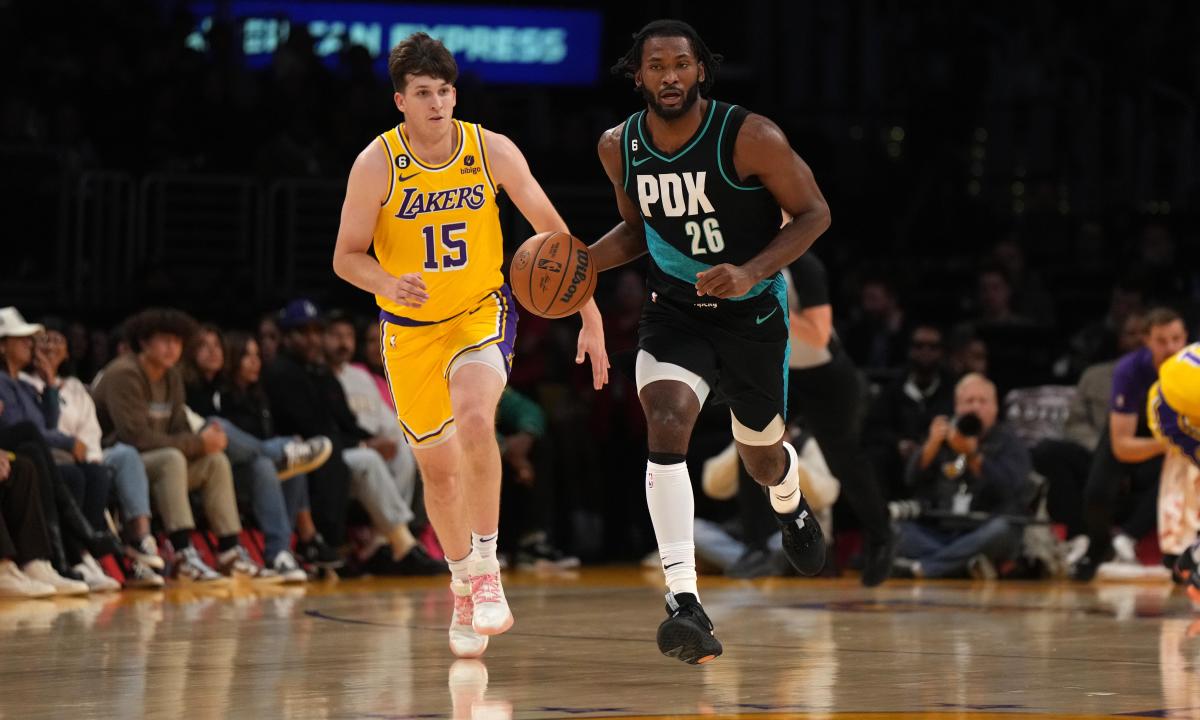 Two nights after blowing a 17-point lead and losing at the buzzer to the Indiana Pacers, the Los Angeles Lakers didn’t take any chances against the Portland Trail Blazers.

After a slow start that saw them fall behind 17-6, the Lakers got themselves going by hitting the boards, especially the offensive boards. They took a 24-22 lead at the end of the first quarter and never looked back.

This time, when they took a big lead late, they maintained their urgency and continued to play with pace, and the result was a 128-109 rout of Portland.

Los Angeles will now head out on the road for a challenging six-game road trip that starts on Friday versus Giannis Antetokounmpo and the Milwaukee Bucks.

Davis was relatively quiet through three quarters, but he came on strong in the fourth quarter as the Lakers made sure they didn’t blow another big lead. He had 13 points in the final period, giving him 27 for the game on 9-of-17 shooting, which included a 3-pointer, as well as 12 rebounds and three blocked shots.

See also  Are the Brooklyn Nets the biggest threat to the Boston Celtics to come out of the NBA’s East?

James was the Lakers’ main hot hand for much of the game. After an off-night against Indiana, he went 12-of-18 overall and 6-of-8 from beyond the arc, allowing him to finish with 31 points, seven rebounds, eight assists and one block.

Beverley played some good defense at times, but as usual this season, he was ineffective offensively, hitting just 2-of-7 shots. He added four rebounds, one steal and one block.

Schroder wasn’t too aggressive offensively, as he scored just six points in 29 minutes, but he also had six assists and did a solid job of helping to push the ball upcourt and get others involved.

Reaves has simply been a revelation for the Lakers dating back to last season when he was a rookie.

Tonight, he went 7-of-10 from the field and 2-of-5 from downtown to finish with 22 points. He scored 14 of them in the first half, and overall, he did a great job of drawing fouls and getting to the free throw line, where he went 6-of-8.

In his spare time, the undrafted wing added five rebounds, three assists, one steal and one block.

The ball always seems to find Gabriel because of the energy and effort he plays with. In 11 minutes, he had four rebounds and one steal while making both of his shot attempts and free throws to score six points.

Bryant got 20 minutes versus Portland and made the most of it, scoring 14 points on 6-of-9 shooting while also hitting his first 3-pointer of the season. He also grabbed six rebounds, and he even dropped three assists.

It was a rough night for Westbrook, who had trouble getting his shot to fall. He was just 4-of-14 for 10 points, although he did hit 2-of-5 from deep. Westbrook also got five rebounds, four assists and one steal in 23 minutes, and he went the entire game without a single turnover.

In 14 minutes, Nunn made 2-of-6 shots, missing both of his 3-point attempts, and scored four points to go along with one rebound and two assists.

Christie got real playing time for the first time in a few weeks after spending a stint in the NBA’s health and safety protocols. He missed all but one of his six shot attempts, with his one make coming on a 3-pointer he banked in during the fourth quarter.

All three got on the floor toward the end during garbage time. All of them went scoreless.