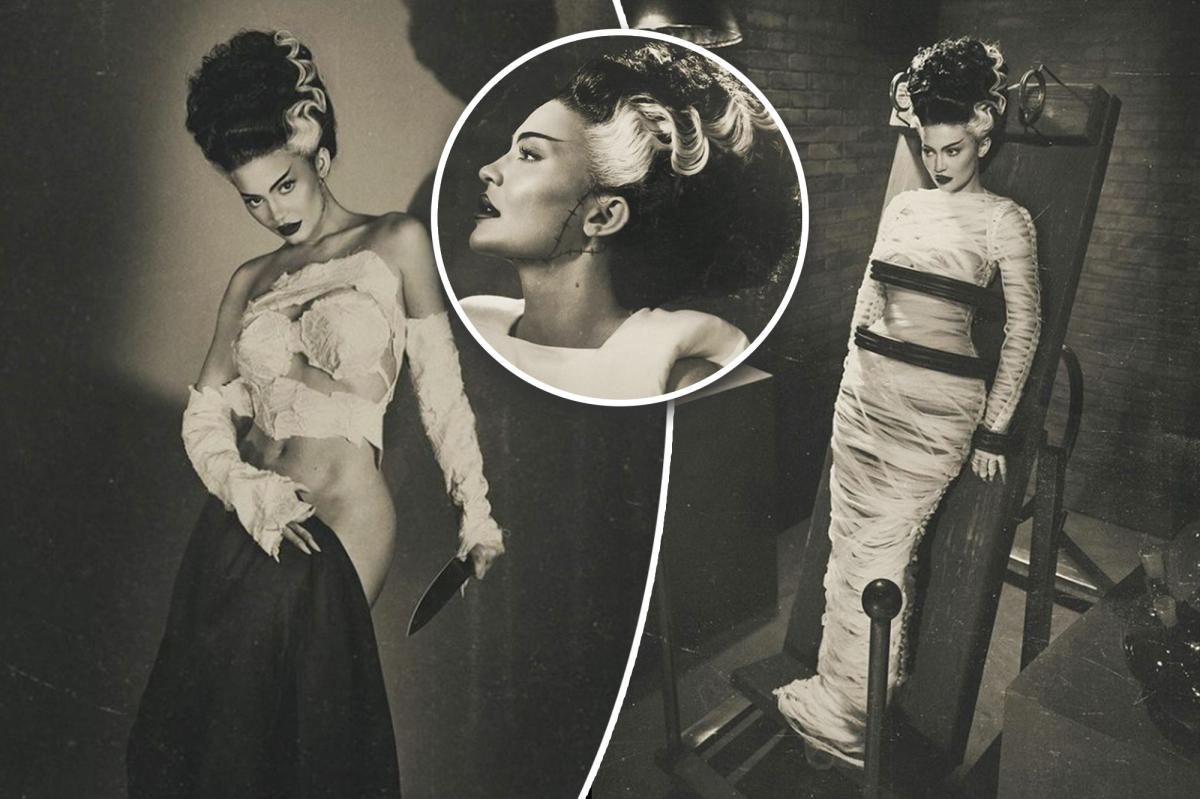 Kylie Jenner is back from the dead this Halloween.

Never one to skimp on Halloween, the Kylie Cosmetics founder debuted her latest costume all dressed up as the “Bride of Frankenstein,” posing against thematically on-point scenery in a photoshoot shared Friday evening.

“BRIDE OF FRANKENSTEIN” declared Kylie for the initial unveiling, revealing black-and-white imagery channeling the aesthetic of the original 1935 horror film “Bride of Frankenstein.”

“HAPPY HALLOWEEKEND,” Kylie, 25, captioned a shot of herself strapped to an operating table situated in a recreation of Dr. Frankenstein’s lab.

A slideshow with the caption “🧟‍♀️🤍” displayed three more snaps of an in-Kharacter Kylie, her top a mass of white gauze while crudely stitched dark scars appeared to be winding up her neck. Topping off the look was a towering hive of dark hair complete with a jagged white streak — the signature undead-‘do of the lady friend to Frankenstein’s Monster.

In two of the shots she seemed to be sans-bottom while brandishing a knife so as to strike a dramatic silhouette, with theatrical lighting further casting a creepy shadow against a blank backdrop.

In the comments, many a Bride of Franken-stan emerged to expressed praise for the youngest Kardashian-Jenner sister’s latest all-in efforts this All Hallows’ Eve.

“KYLOWEEN We are ready for it !!! 😍🔥,” cheered on influencer Heather Sanders.

“how can a character so scary be so hot 🥵 🔥,” chimed in Kylie’s executive assistant, Maguire Grace Amundsen.

The Kylie Baby has hardly kept hidden her enthusiasm for the scariest of holidays in the past. Back in 2014, she embodied another spooky persona’s blushing bride — Bride of Chucky. Halloween 2018 saw her transformed into a “storm” in a cute nod to her then-baby daughter, Stormi Webster. The following year, Kylie was roundly praised for her spot-on embodiment of Marilyn Monroe.