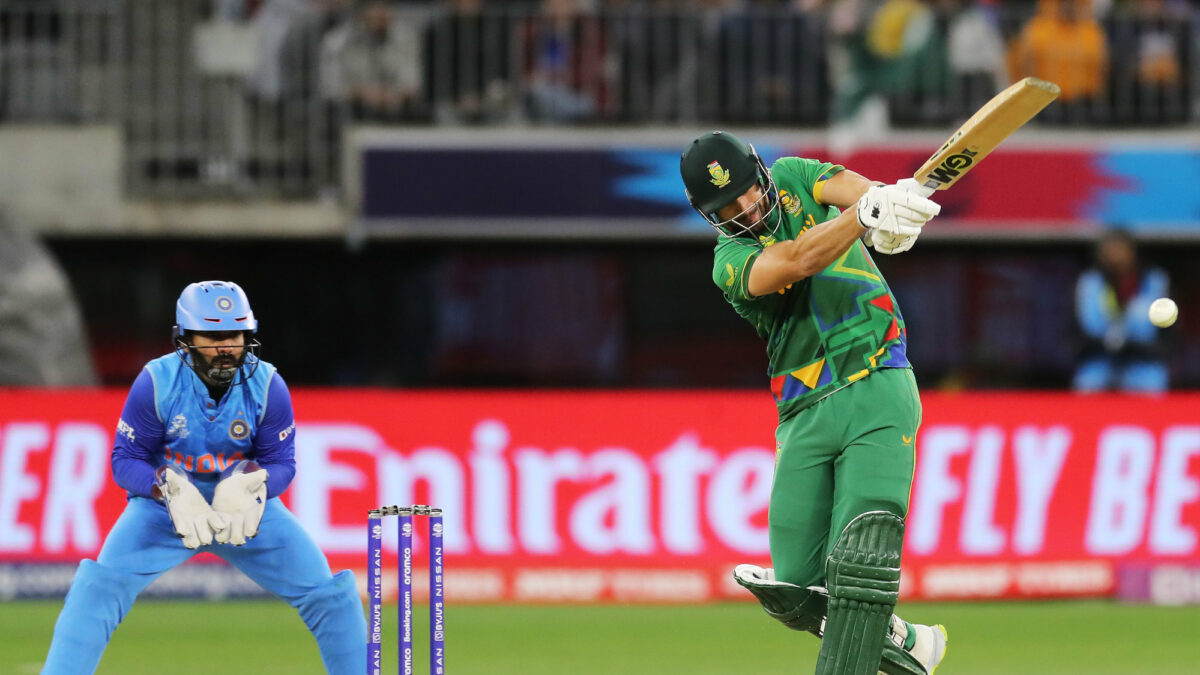 South Africa have one foot in the T20 World Cup knockout stage for the first time since 2014, after half-centuries from David Miller and Aiden Markram steered them to a nerve-jangling five-wicket win over India in Perth.

Chasing a moderate 134 after a four-wicket burst from player of the match Lungi Ngidi routed the Indian top order, the pair put on 76 for the fourth wicket to prove the difference in a hard-fought contest on another spicy Optus Stadium wicket, with Miller unbeaten on 59 and fittingly hitting the winning runs with two balls to spare.

However, India will be ruing a pair of crucial missed chances in consecutive overs mid-innings, with first Virat Kohli dropping a simple chance in the deep to spare Markram, then captain Rohit Sharma missing the stumps from close range to run out Miller.

Had both or even one of the simple chances been taken, India may well have remained unbeaten in the tournament; but that has been the tale of this World Cup, where teams have frequently paid the price for fielding lapses in the bowler-friendly conditions.

A stunning 40-ball 68 from Suryakumar Yadav singlehandedly allowed a competitive total, while young left-arm quick Arshdeep Singh was again ultra-impressive with the ball to remove Proteas stars Quinton de Kock and Rilee Rossouw within three deliveries; but the task was left to too few in the end.

The victory sees the Proteas leapfrog India to the top of Group B, and remain alongside New Zealand as the only undefeated teams left in the tournament; with matches against Pakistan and the Netherlands to come, it’s likely even one win in those matches will be enough to secure a semi-final berth, given their whopping net run rate of 2.772.

India, meanwhile, find themselves level on four points with Bangladesh, who they meet in what looms as a knockout game on Wednesday evening in Adelaide. However, they will be heavy favourites to win both that game and their final group stage match against Zimbabwe on Sunday.

Also of concern is a back injury to wicketkeeper Dinesh Karthik, who limped from the field midway through the Proteas’ innings; however, in Rishabh Pant, a capable replacement for the rest of the tournament is on hand should the injury pove serious.

For captain Rohit Sharma, though, the effort in the field needs urgent improving.

“We gave too many chances in the field and we were not quite clinical,” he said after the match, refusing to blame uncharacteristically icy conditions in Perth for their sloppy evening.

“We were just not good enough, to be honest – we have played in such conditions before, so that’s not an excuse at all. We were not good.

“The last two games that we played, we were pretty good on the field, and we want to continue to be consistent in that department. Unfortunately we couldn’t hold our chance – a few run outs we missed, including myself.

“We need to keep our heads high, think about what’s coming for us, and take a learning from this game.”

If India’s fielding ultimately cost them dearest, another poor start against the new ball and a fired-up Proteas pace attack left them chasing the game from the outset.

Opener KL Rahul’s form continues to be a source of grave concern, edging Ngidi to slip for just 9 to mark his third singl-figure score in three starts this tournament.

Having already removed Sharma just four balls prior as steepling bounce saw the Indian captain splice his attempted pull shot straight back to the bowler, the 26-year old seamer was instantly justifying his call-up to the team. With a remarkable T20I strike rate of a wicket every 12.2 balls, this was precisely what he was there for – to take poles, and plenty of them.

Previous matches at Perth this tournament have leaned heavily in deference to the quicks, but no team has harnessed the conditions quite as spectacularly as South Africa on Sunday night.

Ngidi would add to his first over double blow by claiming the prized scalp of Kohli for just 12, the superstar caught brilliantly off the top edge by Kagiso Rabada just centimetres from the fine leg boundary.

From there, the Indian innings was divided neatly into two: when Yadav was on strike, and when anyone else was.

In the case of the latter, the Proteas continued to dominate, left-armer Wayne Parnell joining the fun with three late wickets, including Yadav himself in the penultimate over to finally ensure India would be defending a below-par score.

Karthik and Ravichandran Ashwin’s sole priority was to stop the collapse and allow Yadav enough strike to raise the rate; that they did, though the former’s painful 15-ball 6 will undoubtedly raise questions over his inclusion in the team ahead of Pant if his back injury doesn’t rule him out regardless.

The only batter all night to truly master the pacemen, Yadav launched the speedy Nortje for a colossal six over deep backward square, pumped Ngidi into the stands over fine leg with a remarkable lap-pull, and provided everything from classical on-drives to zany tennis-forehand clubs down the ground in between.

However, his primary target was sole Proteas spinner Keshav Maharaj, who went for 28 off his three overs to be comfortably the most expensive South Africa bowler.

Yadav’s scintillating 68 had at least dragged India to 133; when Arshdeep got going in just the second over of the run chase, it briefly seemed like he’d done enough.

If bounce and raw pace were the Proteas seamers’ weapons of choice, it was swing for Arshdeep, turning the match in an instant with the rapid-fire scalps of the in-form de Kock and Rossouw.

With an unbeaten 18-ball 47 in a rain-affected washout against Zimbabwe and 63 off 38 against Bangladesh under his belt already this tournament, the Proteas keeper-batsman was always going to be the prized scalp. When he fell driving, a perfect outswinger catching the edge and flying to Rahul at slip for a textbook Test cricket dismissal, the Indian fans burst back into life. 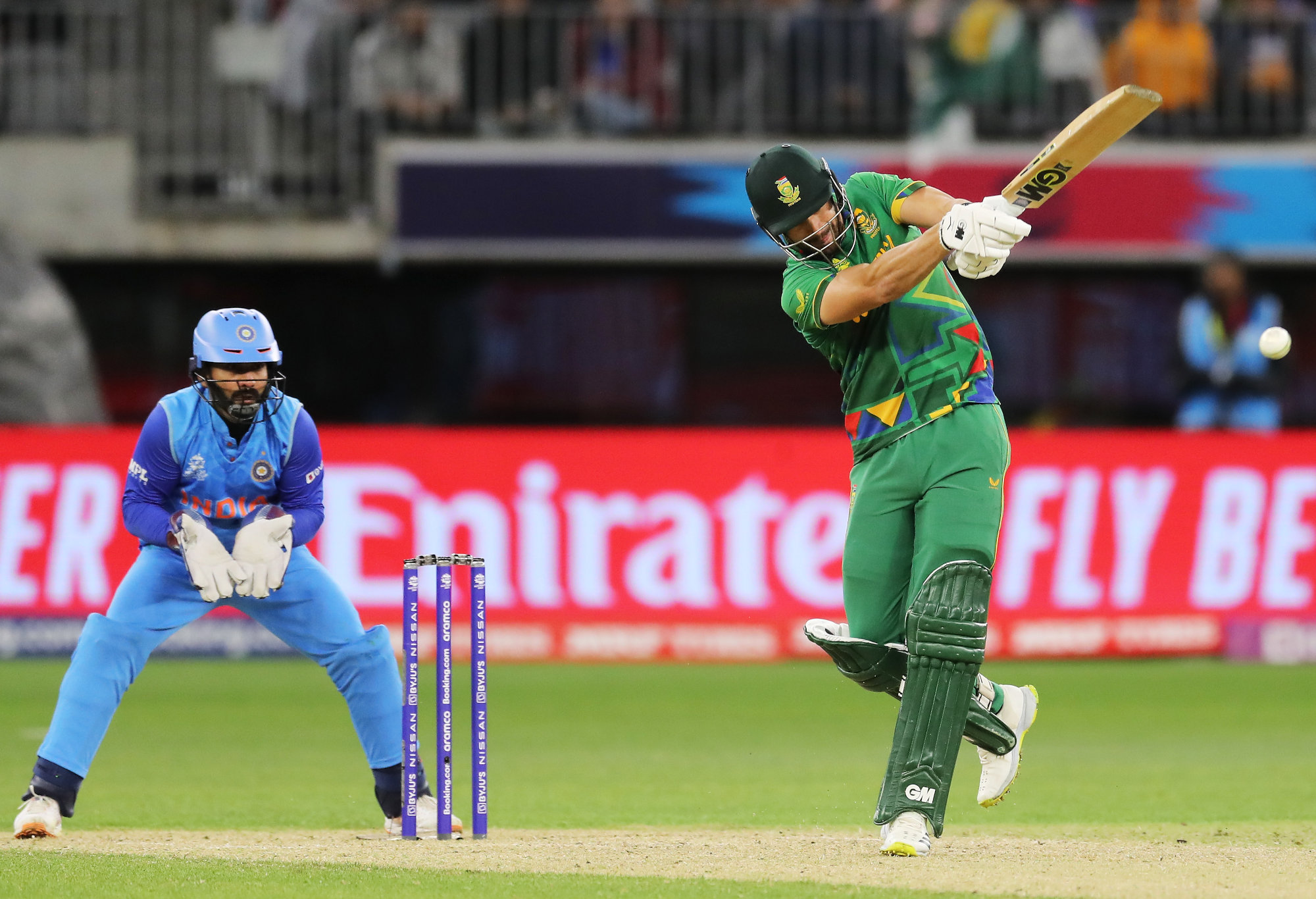 Aiden Markram of South Africa bats. (Photo by Will Russell-ICC/ICC via Getty Images)

When Rossouw, he who had demolished the Tigers with a whirlwind century on Thursday, was trapped in front by an Arshdeep inswinger for a second-ball duck, the on-field not out call overturned by the DRS, the Proteas were 2/3 and in deep trouble.

While only captain Temba Bavuma, who might now be the most under-pressure captain in world cricket not named Aaron Finch, fell from then until the 10-over mark, at 3/40 at drinks with 94 still to get, the challenge was suddenly a mighty one for the Proteas.

Having calmly moved to 23 off 25, Markram’s response after the break would confirm his standing as the number five-rated T20 batter in the world; he and Miller would take 16 from Pandya’s third over and would scarcely take a backwards step from there.

Things might have been very different, however, had Kohli clung on to a simple chance in the deep off Ashwin just an over later. On 35, a flat-batted Markram pull flew straight to the champion at deep mid-wicket, who settled underneath it, still back-pedalling… and watched in horror as it bounced off his hands and to the ground.

Ashwin raised his hands in disbelief on the pitch; Kohli could only smile ruefully. It felt like a flashpoint.

As it happened, though, the next let-off would be even more costly; pressured into a nonexistent single by Markram after bunting Mohammed Shami to mid-wicket an over later, Miller wasn’t even in the picture as Sharma gathered, ran towards the stumps, took careful aim, and missed the simplest of underarms.

Ashwin’s next over would go for 17, Miller and Markram each making hay with a monster six. Suddenly, the batters were set and soaring, and the run rate had fallen to a tick above 8 an over.

Fittingly, Markram would reach his 50 as a skied pull landed between two Indian fielders in the deep; having been 23 off 25 at the 10-over mark, his next 27 runs would require just 13 balls as he lifted a gear with splendid efficiency.

Though he’d hole out off Pandya for 52 not long after, the damage had been done – and with Miller now well and truly locked in, pumping Ashwin for consecutive sixes back over his head to reduce the asking rate to below a run a ball, the game was gone for India.

To their credit, the quicks remained miserly – Shami in particular gave up just 13 runs from his four overs – and with five needed from the final four balls, the wicket of Miller may yet have caused a last-minute panic.

But Miller would once again have lady luck smiling on him, a gloved pull off Bhuvneshwar Kumar flying narrowly past a diving Pant and to the boundary for four. He’d follow up with a crushing lofted drive for another boundary the next ball, ending things in style.

“Our batting line-up as a whole is in good form, probably barring myself,” Bavuma said after the match.

“It’s a batting unit that’s been together for quite a while, guys understand each other, guys know their strengths and weaknesses, and I think to be able to come through in pressure moments like that will do a lot to boost the guys’ confidence in their games going forward.”

However, the captain is perfectly content for the Proteas to remain as underdogs for the rest of the tournament, despite having been just a few balls against Zimbabwe shy of a perfect start to the Super 12s.

“We’ve come into the tournament as not the favourites, and as I’ve said from the beginning, we’ll keep flying under the radar,” he said.

“I think it’s important from us that we keep improving, game in game out, and I think that’s exactly what we’re doing.”

Beat Pakistan at the SCG on Thursday, though, and it might be hard to keep a lid on things anymore. Legendary World Cup chokers, it’s beginning to feel distinctly like the universe is, at last, deciding to smile on South Africa.