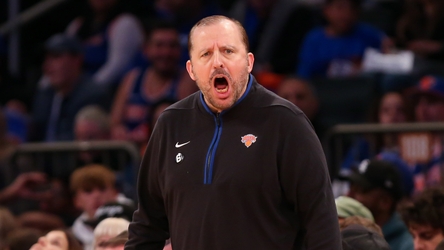 This is last Sunday, mid-afternoon, about a half-hour after the Knicks were embarrassed at home in a loss to the Oklahoma City Thunder.

Julius Randle is answering questions from reporters who want to know what happened, how the Knicks could let Oklahoma City hit 17 threes and 62 percent of their shots.

Randle shares his thoughts on the defensive issues. He talks about the importance of consistent effort, accepting the challenge of guarding your man.

But Randle also talks about something else after that ugly loss. He talks about the team’s opportunity to grow together during the upcoming road trip.

“I think we’ve got a great group of guys who want to (find consistency on both ends of the floor),” Randle said. “…. There’s nothing like a long road trip of us being around and bonding with each other, really getting to spend time with each other. So it I will be a great time for us to find that consistency.”

At the time, even the most optimistic Knicks fan would probably question Randle. The club was coming off of a bad loss and heading into a tough five-game road trip.

The kind of road trip that sinks seasons if teams are splintering.

But Randle was right. After a team dinner prior to the Utah game, the Knicks swept a tough back-to-back in Utah and Denver.

Evan Fournier noted that playing in Denver on the second night of a back-to-back is among the toughest scheduling scenarios in the NBA because of the city’s altitude and difficult travel itinerary for opposing teams.

Randle’s fingerprints were all over the win in Denver. He played one of his best – and most complete – games as a Knick.

In the process, he probably turned down the scrutiny on his head coach.

As we noted on Monday, Tom Thibodeau’s seat was warming after the OKC loss because it was the third game over the past two weeks in which New York’s defense looked subpar.

If Thibodeau had totally lost connection with his players, you probably would have seen evidence of it in the past two games. But the Knicks didn’t lay down in Utah or Denver. They competed and won two road games against teams that took the court that night undefeated in their home arena.

We’ll learn more about the club in the final three games of the road trip (at GSW, PHX and OKC). But the first two games have shown that, at the very least, this team hasn’t quit on its head coach.

Have you heard of ‘six degrees of separation’? It’s the social theory that we’re all — at most — six connections away from each other.

In the basketball world, there’s the six degrees of Tom Konchalski.

Whether it’s Dr. James Naismith, Paolo Banchero or anyone in between, everyone in the basketball world is only a few connections away from Konchalski.

Konchalski died in February 2021 after a two-year battle with metastatic cancer. He was 74. Obituaries for Konchalski appeared in a wide array of publications. The New York Times, NBA.com, Slam Magazine. It was a testament to the sheer number of people Konchalski impacted.

“He just had a very unique skill that touched so many lives,” says Barry “Slice” Rohrssen, who has coached at Kentucky, St. John’s, UNLV, Manhattan, Pitt and St. Francis.

“His range was limitless. He touched the greatest players and programs in the country; he also found scholarships for a Division II player or placing a worthy young man into the right Division III program.

Rohrssen and dozens of others impacted by Konchalski will gather on Saturday at Fordham University to honor the man. It’s an event billed as “The Celebration of Basketball – Honoring Tom and the Game he Loved” and it’s part of the Tom Konchalski Classic, which is hosted by Fordham.

The event has been organized by The Tom Konchalski Foundation, a group that formed several months ago ‘to celebrate Tom’s values, to honor his mission and to perpetuate his kindness – continue his good work and take things forward.’

Those are Rorhssen’s words. He started the group along with a small number of family and friends. It’s since grown into a Who’s Who of the basketball world. Hall of Famers Mike Krzyzewski, Bobby Hurley Sr. and Mike Breen are on the advisory board. Billy Donovan and Bobby Cremins are as well. Omar Minaya is on the Board of Directors.

The foundation provides resources for deserving student athletes locally and nationally. Just like it’s namesake did.

“He loved scouting, he loved people,” Rorhssen said of Konchalski.

He published his reports in the High School Basketball Illustrated, which was printed and mailed to college coaches at all levels. Konchalski didn’t have a cell phone or email address. He had an answering machine for a brief time. But he got rid of it because he felt badly about not being able to return all of the messages he’d receive. He had a direct hand in getting a young Michael Jordan into Five-Star basketball camp in Pennsylvania, where he gained the attention of the basketball world. He was the link between Ernie Grunfeld, Bernard King and the University of Tennessee. In a world of so-called power-brokers, Konchalski had plenty of influence. You just wouldn’t know it by spending time around him.

“Tom went to mass every day… He received holy communion every day,” Rorhssen said. “Tom was the closest thing to a living saint that I’ve ever met.”