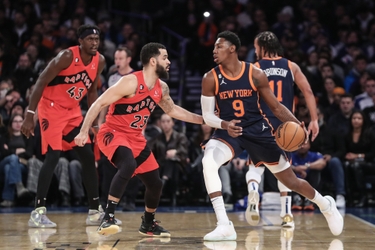 The Knicks battled back from a 14-point deficit but ultimately lost to the Toronto Raptors, 113-106, to snap their eight-game winning streak.

Here are the key takeaways…

– With Quentin Grimes ruled out before the game, Immanuel Quickley made his first start of the season and seventh of his career. Joining Quickley in the starting five were RJ Barrett, Julius Randle, Mitchell Robinson and Jalen Brunson.

– Neither team really separated from one another in the first quarter and instead went back-and-forth, trading baskets during the opening frame. The Knicks’ largest lead of the quarter came in the early minutes at 9-4 while Toronto’s largest lead came with just over 2:30 left at 26-22.

– Getting the final shot of the quarter, Isaiah Hartenstein tipped in a Randle missed shot that cut New York’s deficit to one point at 28-27.

– In the second quarter, Barrett, who had a good game from downtown, tied the game at 32 with a three-pointer. But after that bucket, it was all Toronto and Pascal Siakam as the Raptors went on an 11-0 run. Another Barrett three-pointer finally ended the Knicks’ scoring drought.

– Toronto outscored New York by nine in the second quarter and at one point, led the Knicks by 14 points. That was the largest lead by an opponent in the Knicks’ last nine games.

– The biggest culprit behind the poor play by New York was turnovers. At the half, the Knicks were losing the turnover battle, 10-3, and were down 63-53 after Barrett drained another three with three seconds remaining.

– Quickley opened up the scoring in the second half with a three-pointer and in the blink of an eye, the Knicks went on a 13-2 run to regain the lead at 66-65. During that stretch, Quickley made three three-pointers with the final one a heat check that sent the Madison Square Garden crowd into a frenzy.

– But from then on, New York scored just 14 points and allowed the Raptors to re-take the lead. The Knicks headed to the fourth quarter down 87-80.

– Much like the third, the fourth quarter started off well for New York as Miles McBride made a three and Derrick Rose drained a two to cut the Raptors’ lead to two points.

– A 9-0 Toronto run gave the away team a double-digit lead once again, but the Knicks never gave up and an ensuing 8-0 New York run brought the game to 96-93.

– The Knicks took their first lead since the start of the third quarter on a Barrett slam that almost blew the roof off the Garden. Barrett finished with 30 points, as did Randle. Quickley had 20 points in his first game as a starter this season.

– In the end, though, it was too much Siakam who finished with a career-best 52 points in 41 minutes. Fred VanVleet added 28 points.

– The Knicks shot a better percentage from both the field and the three-point line than the Raptors did, but the turnovers and free-throw shooting cost them in this one.

After playing on back-to-back nights, the Knicks get a day off before resuming play on Friday, Dec. 23 against the Chicago Bulls at MSG. Tip-off is set for 7:30 p.m.