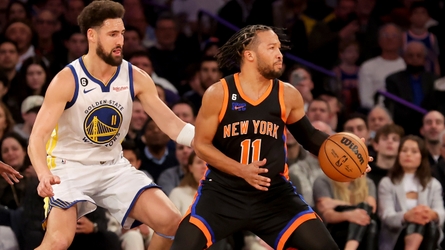 The New York Knicks extended their winning streak to eight games as they defeated the Golden State Warriors 132-94 on Tuesday night at Madison Square Garden for the first time since 2013.

Golden State, of course, was without star point guard Steph Curry who will be sidelined for about a month with a left shoulder injury. Despite being listed as day-to-day coming into the game, power forward Jonathan Kuminga was available off the bench for the Warriors.

Here are some takeaways…

– It was an entertaining first quarter of basketball at the Garden. After a bit of a slow start, both teams settled in nicely. The Knicks looked really solid offensively, moving the ball well, hitting threes (43 percent), taking smart shots, and reeling in offensive rebounds (five).

See also  In the NBA, 20 seconds can last 20 minutes in real time. That needs to change

They were able to stretch the lead to 33-25 after one.

Grimes played a really strong quarter, dropping eight points and dishing a pair of assists, including a nice feed leading to a Randle lay-in. Randle was dominating the glass with seven rebounds himself in the quarter, to go along with seven points.

Jordan Poole led the way for the Warriors with 12 points.

– Both teams were letting it fly in the second quarter. Golden State was able to cut the lead to as low as two points. Immanuel Quickly hit his first three threes for nine points, but three quick fouls forced him to the bench.

Brunson entered in his place and nine straight points of his own pushed the lead back up to 14 with about five minutes remaining in the half. Jericho Sims also slammed home a pair dunks for four points off the bench.

The Warriors cut the lead down to ten at one point, but the Knicks ended the first half with a 69-56 lead.

After his second quarter surge, Brunson was up to a team-high 16 points on 6-of-10 shooting. Grimes, who was a bit shaken up late in the second after a Ty Jerome foul, was next with 13 points, including three threes.

Randle continued his strong start with 12 points, eight rebounds, and five assists. Poole led the Warriors with 17 points and Klay Thompson shot just 3-for-8 with seven points in the half.

– A 7-0 run pushed the Knicks lead all the way up to 17 early on in the third quarter. Grimes added his fourth triple of the game, to get him up to 16 points on just seven attempted shots. Randle locked in a double-double just two minutes into the second-half.

Despite a strong push from the Warriors bench; Kuminga, Jerome, and James Wiseman, the Knicks kept the lead at 15 or more throughout the third. They found themselves leading 100-81 heading into the final frame.

Barrett put together a strong quarter with 11 of his 18 points and Quickley drained his fourth three of the night to get him up to 14 points in 14 minutes.

– Quick picked up where he left off in the fourth, sparking an 8-0 run to get himself up to 20 points. New York never turned back from there, as both teams emptied the benches with over five minutes left. The Knicks extended their winning streak to eight games with the 132-94 victory.

Sims put together some strong minutes late with two more impressive slams, he finished with eight points and five rebounds. McBride had ten points including a pair of threes and Ryan Arcidiacono and Svi Mykhailiuk also saw a few minutes as well.

The Knicks finished the night with six different scorers in double digits. Quickly led the way with 22 points and four rebounds, Brunson had 21, Grimes had 19, Barrett had 18, and Randle had 15 points and 12 rebounds.

The Knicks have a quick turnaround as the Toronto Raptors come to town Wednesday night, tip-off is set for 7:30 p.m.