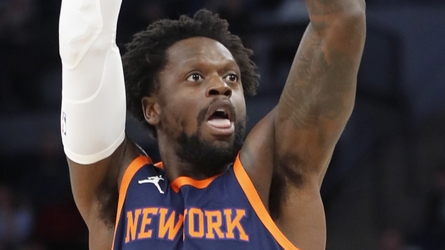 The Knicks jumped on the Timberwolves early behind a hot-shooting Julius Randle, capitalizing on a 22-4 start to the second quarter and defeating Minnesota 120-107. New York improved to 5-5 on the season.

Here are the takeaways…

1. The Knicks were once again without Mitchell Robinson and Quentin Grimes, while the Timberwolves were short Rudy Gobert.

3. Randle got off to an hot start, hitting five threes in the opening minutes. He began with standstill looks before hitting his vintage sidestep treys. He’d keep the sharpshooting going throughout the evening, finishing with 31 points and eight rebounds on 8-of-13 shooting from deep.

5. After Randle’s start, Reddish got in on the action with a couple catch-and-shoot looks of his own. All told the Knicks nailed 10 of their 19 deep attempts in quarter one.

6. The Knicks played the Timberwolves well in the first, scrambling defensively and moving the ball well on the other end. Minnesota’s six threes, behind two apiece from Russell and Jaylen Nowell, kept them within reach for most of the quarter. However, New York pulled ahead 38-29 behind its bombardment to finish the first.

7. New York’s bench jumped on the Wolves with a 10-0 run to begin the second. Minnesota recorded their first point in the quarter over three minutes into it.

8. The Knicks extended their lead to 60-33 just past the midway point of the quarter. Obi Toppin put in a couple threes en route to 12 points in the first half. He finished with 15 and four steals, along with 3-8 shooting from deep.

9. Minnesota failed to find a rhythm and gave New York whatever they wanted offensively. They recorded as many turnovers as assist deep into the second. The Knicks led 76-52 at the break behind 20 first-half points from Randle and 10 points and five assists from Brunson.

10. The Knicks kept things rolling in the third, holding on to their 20-point advantage, 103-80 entering the final period.

11. Minnesota opened the fourth on a 9-0 run to cut New York’s lead to 14. A Randle step-back three and back-to-back Brunson threes stabilized the momentum.

12. Randle hit yet another tough three ball to extend the lead back to 20 with just over three minutes remaining. The Knicks would cruise to one of their smoother wins of the season.

13. The center rotation of Sims and Hartenstein held down the fort with Robinson out.

14. New York’s bench was a dominant force outside of their early fourth quarter slip up, despite poor shooting nights from Derrick Rose and Evan Fournier.