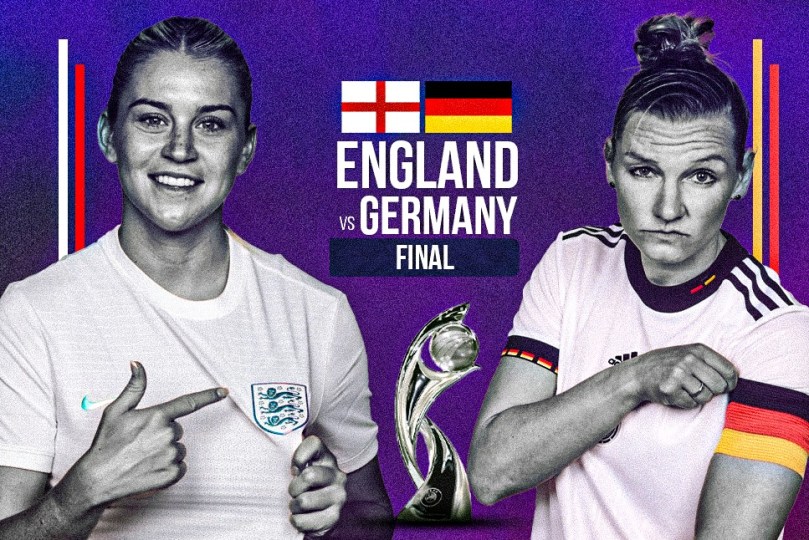 Where to watch England vs Germany, UEFA Women’s EURO Final 2022 Live in India?

The Women’s EURO Final, England vs Germany 2022 will be live telecasted on SonySix/ Sony Ten and Live streamed on Sony LIV in India.

England vs Germany LIVE: Women’s EURO FINAL 2022 to be played at Wembley

ENGLAND Women’s team: A record 14 goals without reply in the group stage was a statement, but in their quarter-final meeting with Spain, England were second best in terms of possession, accuracy, energy and skill. Resolve, character, Millie Bright’s commitment in defence and Sarina Wiegman’s canny substitutions carried them through, and Georgia Stanway’s spectacular extra-time winner instilled further belief that they could go all the way. Indeed, the Lionesses then produced an almost perfect performance against Sweden in the semis, capped by Alessia Russo’s outrageous back-heel.

GERMANY Women’s team: Germany have only conceded once at these finals and they have looked strong and focused throughout. They were given a stiff quarter-final test by an aggressive Austria, who did not allow them to control the game, while the semi-final against France was a similarly tight affair. Germany’s willingness to defend hard has got them over the line so far, while clinical finishing – in particular from six-goal forward Alexandra Popp – has made the difference at the other end.

See also  Granit Xhaka: ‘People say you don’t give everything for the club, but that’s bull’ | Arsenal

The Women’s EURO Final 2022 will be live telecasted on SonySix/ Sony Ten for fans in India.

What does the Women’s EURO 2022 winner receive?

The current competition trophy was provided by Milan-based G.D.E. Bertoni, and unveiled in Manchester at the draw for the 2005 final tournament on 19 January of that year.

The original trophy, which is used for the official presentation ceremony at the final and at other official events approved by UEFA, remains in UEFA’s keeping and ownership at all times. A full-size replica trophy, the UEFA European Women’s Championship winners’ trophy, is awarded to the winning association. The winning team is presented with 40 gold medals and the runner-up with 40 silver medals.

The champions will also face the winners of the 2022 CONMEBOL Copa América Femenina (played from 8 to 30 July in Colombia), in the first UEFA-CONMEBOL Women’s Finalissima, planned to be played in Europe, with the date (during an international window) and location of the event to be announced in due course.