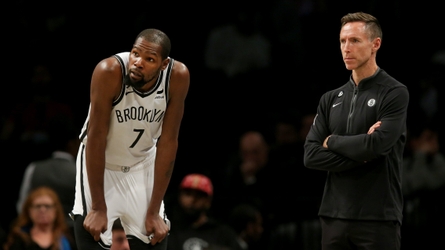 Nets’ players say they were “shocked” and “surprised” when they found out this afternoon that Steve Nash was no longer the team’s head coach.

Kevin Durant said he heard the news after waking up from an afternoon nap and seeing it on ESPN.

“Shocked, I mean, you’re always shocked when a move like this happens,” Durant said after Brooklyn’s 108-99 defeat to the Chicago Bulls.

“But it’s normal in the NBA. It’s about getting ready for the game tonight. It’s a quick turnaround always in the league, especially during the season. You got practice, games coming up so you can’t think too much about it,” he said. “It was on my mind for a little bit today.“

Joe Harris said he was surprised the move happened just seven games into an 82-game season.

“I think everybody was really surprised, it’s still so early in the year,” Harris said. “You play so many games in an NBA season, where – even if you’re struggling as a team, individually, whatever it is – you know you have a lot of games to fight and claw your way back. So, certainly, a surprise given the timing of it.”

But while Durant said he was shocked, the move did not catch him off guard too much.

“I mean, let’s be real. We’re pros. We’re veterans. You know, we had a tough start a rocky year, last year, rocky summer. We knew that everybody was being evaluated. That’s just how it is in the league,” he said.

Durant said “a lot of stuff” contributed to the end of Nash’s time in Brooklyn from the Nets not having a healthy team to not playing well. “And that’s what happens in the league. S— happens.”

Harris added: “This is what happens when things are not going as expected…Or you’re not up to the level the organization has set for itself. And it’s unfortunate that he’s got to be the one to go.”

When asked if he thought the volatility around the organization over the course of Nash’s tenure contributed to his exit, Durant said, “It’s the NBA. Everyone got volatility.”

“Outside people might look at what we do as bigger than what it is, but we come to work every single day,” he said. “Guys ask for trades… coaches get fired, we have disagreements in our locker room, it happens in the NBA. But at the end of the day we all came to work, it just didn’t work out on the floor.”

Harris characterized what Nash had to deal with during his time as head coach as a “whirlwind.”

“I think it was a difficult task, first of all, for Steve,” he said. “It was not an easy job for him given how much turnover we had, there wasn’t a lot of consistency in his tenure with us really from the moment he got here whether it was Covid-related things, injuries, trades, whatever it might be, there was a lot of coming and going and with his staff, even, too.”

Durant likened it to a roller coaster.

“But, the core of it, basketball is something that we all love to do,” Durant said. “Regardless of who the coach, regardless of the circumstances you still gotta come to work, so I enjoyed coming to work with Steve.”

Harris said Nash did not address the team after the news broke and Durant added he has not spoken to his former head coach.

Durant and Harris both said they did not believe Nash’s message was being tuned out by the locker room. And Harris said there is a great deal of respect for the departed coach among the players.

“Everyone across the board in that locker room, we all love and appreciate Steve for everything he did for this organization,” he said.