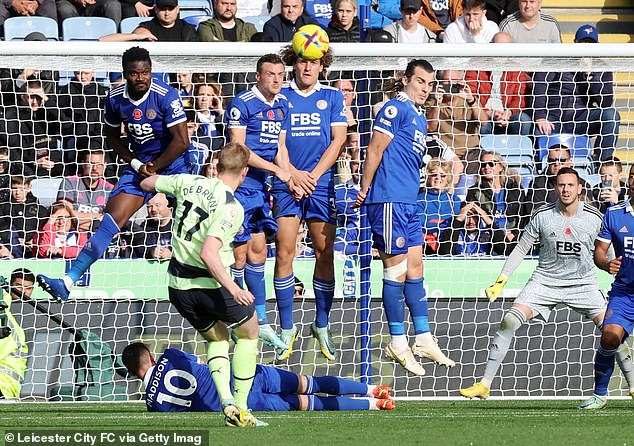 Kevin de Bruyne’s sensational long-range free-kick earned Manchester City a narrow 1-0 win away at Leicester and moved them top of the Premier League.

The Premier League champions were made to work hard at the King Power on Saturday, and in the end it took a moment of magic from De Bruyne to secure all three points.

Leicester rallied late on in search of an equaliser, but City held firm to claim their ninth win from 12 and leapfrog Arsenal into top spot.

So who impressed most in the game and which men disappointed? Sportsmail‘s James St Denis is on hand with ratings for both sets of players. 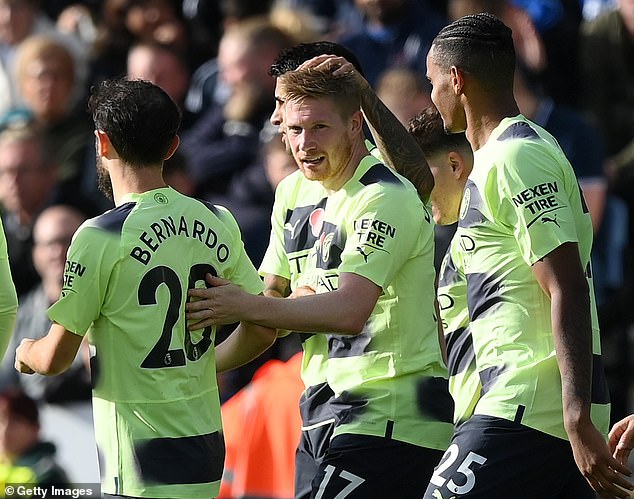 Danny Ward – 6.5: A couple of tidy first-half saves to keep City at bay but could do nothing to stop the visitor’s opener.

James Justin – 6: Caught out a couple of times whilst in possession, but overall a strong showing from the fullback.

Wout Faes – 6: Leicester’s best defender by a mile. Comfortable with the ball at his feet and dominated in the air.

Caglar Soyuncu – 5: Sloppy in possession and always looked the weakest of the three centre halves in his first appearance of the season. 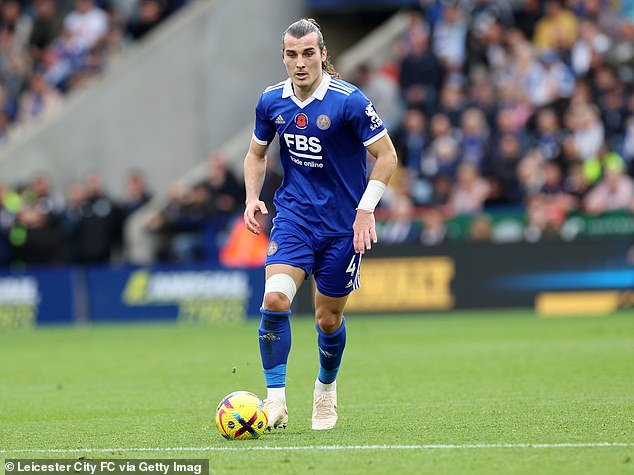 Daniel Amartey – 6: Looked tentative on the ball but the Ghanaian grew in confidence the longer the game went on.

Timothy Castagne – 5.5: A good battle with Grealish throughout the game, but the Belgian slowly phased out towards the end.

Harvey Barnes – 5.5: Had the better of City’s defence in the first half, before being doubled up in the second, leaving him to struggle.

Youri Tielemans – 6: Could not do anymore if he tried. Denied a stunning equaliser early in the second half by Ederson’s fine save.

James Maddison – 5.5: Unable to work his usual magic in the final third with the playmaker trapped well inside his own half.

Kiernan Dewsbury-Hall – 4.5: Struggled to deal with the intensity of City’s midfield, hauled off at half-time after an unusually poor showing from the academy graduate. 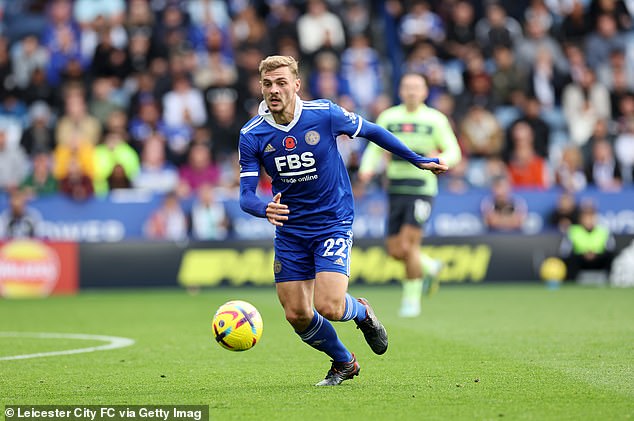 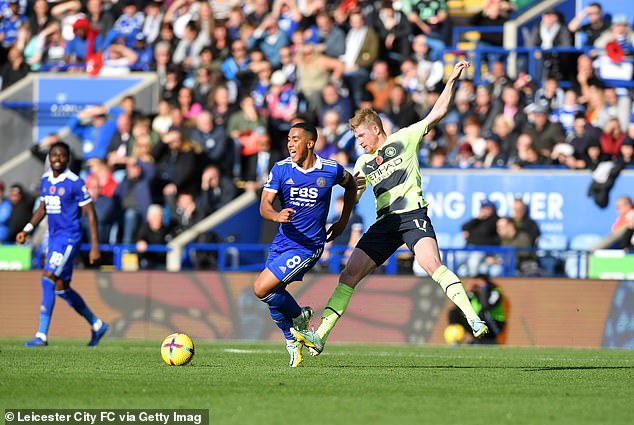 However, Youri Tielemans (left) could not have done any more if he tried in the Foxes midfield

Jamie Vardy – 5: Cut an isolated figure up top for the Foxes, with Leicester’s system requiring more defending than attacking.

See also  AHEAD OF THE GAME: Sky Sports are against the EFL's plans to end the 3pm blackout

Substitutes: Nampalys Mendy – 6: Injected some energy into the Foxes midfield. Tried to get at the City midfield, but nothing came of it.

Patson Daka – 6.5: Added some much needed energy into Leicester’s attack, with the home side instantly becoming more of a threat going forward.

Kelechi Iheanacho – 6: Like his strike partner, injected some tempo into Leicester’s attack, and should have equalised late on.

Brendan Rodgers – A story of too little too late for the Foxes boss. The right changes, but the wrong time.

Ederson – 7: Barely called into action in the first period, but pulled off a superb save to deny Tielemans an equaliser in the second.

Joao Cancelo – 7: A constant threat down the right-hand side from fullback. His versatility made it impossible for Leicester to mark him. 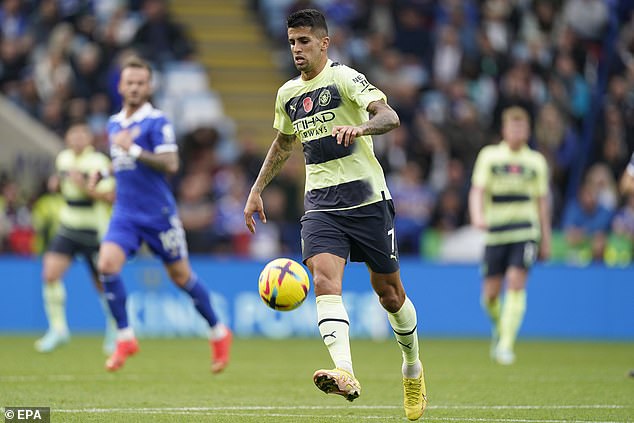 John Stones – 6.5: Caught out by the rapid Barnes in the first-half, but regrouped and looked assured for the remainder of the match.

Aymeric Laporte – 6: Almost made to pay for an error late on, but had Ederson on hand to spare his blushes.

Manuel Akanji – 6: Never moved out of first gear, but didn’t really need to anyway. Very comfortable for the Swiss international.

Rodri – 7: Anchored the City backline with ease. Comfortable on the ball and rarely pressured into a mistake by the hosts.

Kevin De Bruyne – 8: Was at the heart of everything City did right, opening the scoring with a stunning freekick after the interval.

Ilkay Gundogan – 6.5: A good, but not outstanding performance from the captain. Got the job done with a minimal fuss. 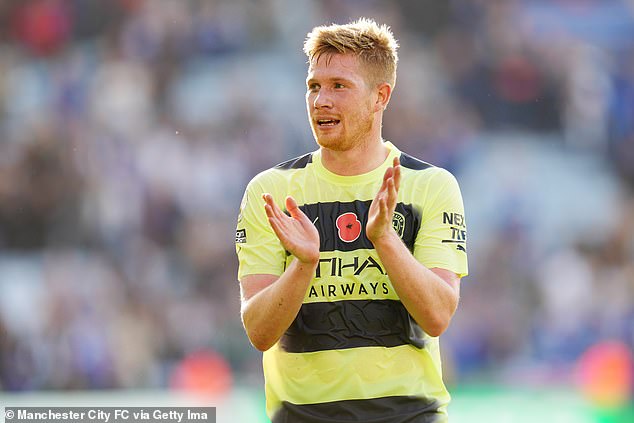 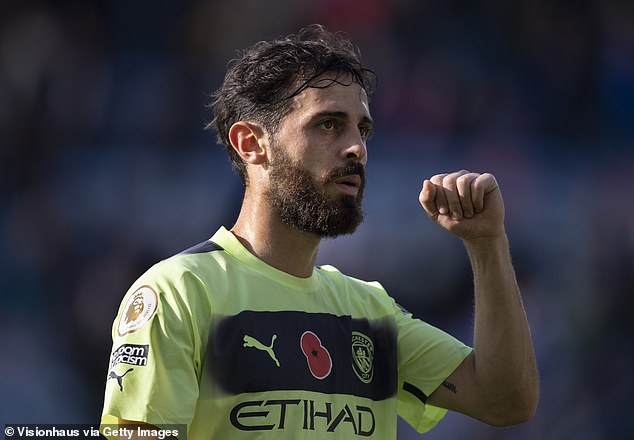 Jack Grealish – 6.5: All action performance from City’s number ten, with his directness causing Leicester’s backline all sorts of problems throughout.

Julian Alvarez – 6: It was always going to be tough replacing Erling Haaland, with today just not being the Argentine’s day.

Substitutes: Ruben Dias – 6: Straight into the action as the home side upped the ante late on but held on for the win. Phil Foden

Pep Guardiola – Another crucial win for City and the Spaniard. Even with seven changes, they got the job done.