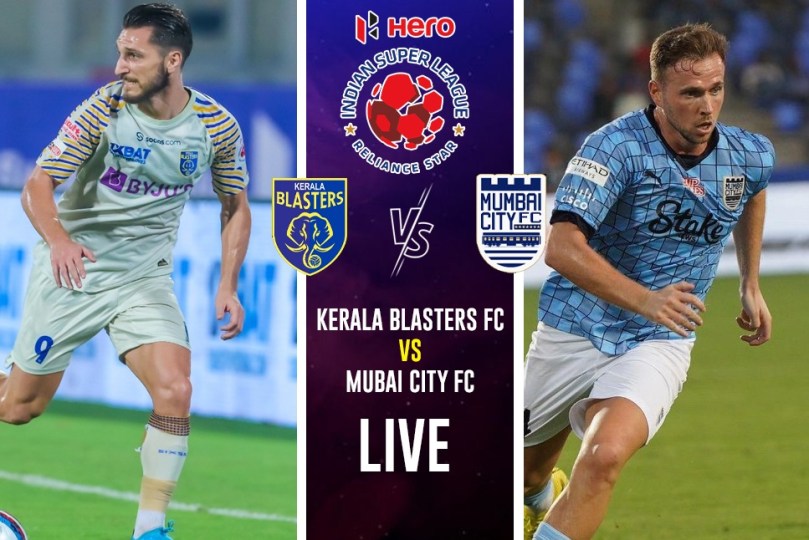 KBFC vs MCFC LIVE: Kerala Blasters vs Mumbai City FC LIVE: ISL 2022 LIVE: On October 28, Kerala Blasters will play Mumbai City FC at the Jawaharlal Nehru Stadium in Kochi. The Blasters began their ISL 2022-23 season with a 3-1 win against East Bengal, but have since lost two straight games to ATK Mohun Bagan and Odisha FC. The Islanders, on the other hand, won one match and drew two in three. Follow Indian Super League and ISL 2022-23 LIVE Updates on InsideSport.IN.

Adrian Luna’s opening and Ivan Kalyuzhnyi’s brace in the second half helped Kerala Blasters get off to a winning start in the ISL 2022-23 season against East Bengal. The Blasters, on the other hand, lost their next game against ATK Mohun Bagan, as Dimitri Petratos scored the first hat-trick of the ISL 2022-23 season.Harmanjot Khabra scored in the 35th minute to give the Blasters the lead, while Jerry Mawihmingthanga equalised in the 54th minute and substitute Pedro Martin won it in the 86th minute for Josep Gombau’s side.

Hard at work ahead of our final fixture in October! 💪🏻

As for ISlanders, in their tournament opener against Hyderabad, though, both clubs shared points as the two sides opened their Indian Super League season with an entertaining 3-3 draw at the Shree Shiv Chhatrapati Sports Complex in Pune.In their first home game of the season, the Islanders defeated Odisha 2-0 in a hard contested match. The Islanders took all three points thanks to an own goal by Shubham Sarangi and a 94th-minute Bipin Singh strike.

The Islanders drew 1-1 with Jamshedpur in their second home game of the 2022/23 ISL season. Des Buckingham’s team took an early lead due to Chhangte’s first ISL goal of the 2022-23 season. The Red Miners quickly equalised, leaving the Islanders disappointed with a point at the Mumbai Football Arena in Andheri at the conclusion of the night.

In the 16 previous games between the two teams, MCFC has won six times and KBFC has won four. Six of these games have finished in a tie. The Blasters won two of those four games last season, including a doubleheader against the Islanders. KBFC head coach Ivan Vukomanovic will be looking to maintain his unblemished record against MCFC, and there’s no better place to do so than at home following two consecutive defeats this season.

Blasters will almost certainly play in a 4-4-2 configuration. The goalkeeper will be Prabhsukhan Singh Gill, and the back four will be Hormipam Ruivah, Marko Lekovi, Harmanjot Singh Khabra, and Jessel Carneiro, with Ruviah and Leskovic lined up in the centre and Khabra and Carneiro on the flanks. Puitea and Jeakson Singh are set to comprise the Kerala Blasters’ midfield engine room, while Sahal Samad and Adrián Luna are slated to play on the flanks. The Blasters’ assault will most likely be led by Ivan Kalyuzhnyi and Dimitrios Diamantakos.

In goal, Phurba Lachenpa is anticipated to start, while Mehtab Singh will join Rostyn Griffiths in centre defence. Rahul Bheke and Sanjeev Stalin will surround them on the wings. Alberto Noguera and Ahmed Jahouh, the energetic and innovative duo, are most likely to accompany Apuia. Greg Stewart is expected to start up front, partnered on the right by Lallianzuala Chhangte. Bipin Singh will feature on the left flank.

What time will the Kerala Blasters vs Mumbai City FC begin?

Which TV channels will broadcast the Kerala Blasters vs Mumbai City FC match?

How to watch the live streaming of the Kerala Blasters vs Mumbai City FC match?

Kerala Blasters vs Mumbai City FC match will be live-streamed on Disney+ Hotstar.