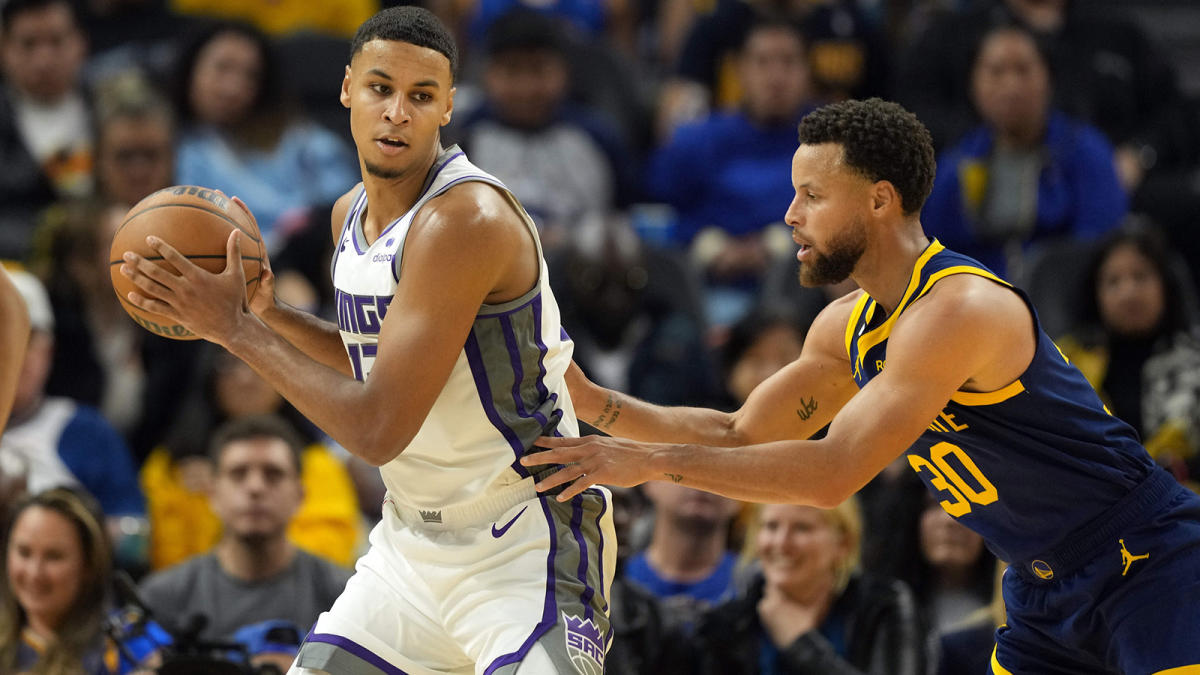 The 22-year-old forward from Iowa has carried himself with the same steady presence on and off the court since being selected with the No. 4 overall pick of the 2022 NBA Draft.

A perfect example was the opening minutes of the Kings’ 130-125 loss to the Warriors on Sunday night.

Murray, not a member of coach Mike Brown’s starting rotation — yet, anyway — watched from the bench as Sacramento fell behind Golden State 12-2 after three minutes of action. Brown called a timeout and ordered Murray to take the floor.

The Kings’ offensive attack immediately began to flow better. And it’s not like Murray entered the game demanding the basketball.

Sacramento guard De’Aaron Fox drove to the hoop for a bucket. Domantas Sabonis earned a trip to the free-throw line and threw down a dunk. A few minutes later, Murray splashed a 27-foot 3-pointer off a pass from Fox, then grabbed a rebound off a Klay Thompson miss and knocked down a jumper to tie the game at 15.

That’s the level of play the rookie has put on tape, for 33 minutes in his NBA debut and over 38 minutes Sunday night.

Murray knocked down 7 of 10 field-goal attempts for 19 points in the Kings’ 111-109 loss to the Los Angeles Clippers on Saturday. He followed it up with 16 points, four rebounds and one steal against Golden State.

See also  Will Chet Holmgren, Jabari Smith or Paolo Banchero get selected with No. 1 pick?

“He’s the most efficient guy I’ve ever been around,” Fox said to Green. “You look over, he’s shooting, he’s not missing. We played pick-up a little bit before training camp. He doesn’t miss; he doesn’t have any wasted motion. Everything he does is just efficient — defensively, offensively, grabbing rebounds, boxing out.

Murray has been thrown into the fire on the defensive side of the ball. He was tasked with guarding seven-time All-Star Paul George in his debut. On Sunday night, Murray shadowed Steph Curry at times, although the reigning NBA Finals MVP issued the rookie a “welcome to the NBA” moment with a devastating step-back jumper. But Curry does that to the league’s best defenders.

Murray ran into trouble for the first time in his career in the second half at Chase Center. While the Kings mounted a comeback from 26 points down, Murray missed all but one of seven field-goal attempts in the final two quarters.

See also  Sixers' James Harden says he told Daryl Morey to improve team, 'give me whatever is left ofter'

RELATED: Why Fox says this Kings team is ‘most talented’ he has been on

Still, though, no one could tell Murray was struggling based on his his body language. He was the same reliable Keegan Murray.

“If he had some facial hair, I would’ve thought bro was in his 30s,” Fox joked to Green. “But I think he just turned 22. He walks around, and [his] demeanor is always calm. He’s going to be really good.

“He’s going to show the world what he can do.”

Two games into Murray’s career, the kid from Cedar Rapids, Iowa, looks like he’ll have a long, prosperous NBA career. Just like “The Big Fundamental.”