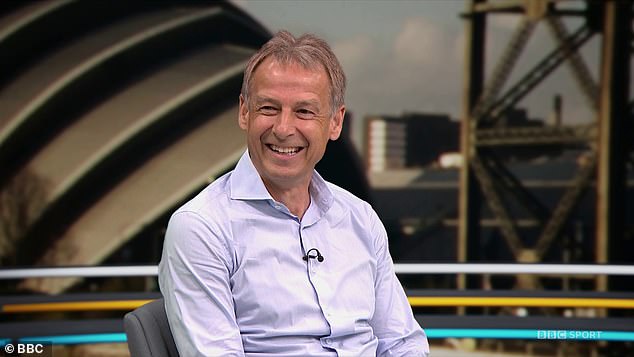 English football’s favourite German sits at his kitchen table in California and considers the passing of time. It is 32 years since Jurgen Klinsmann held the World Cup in his hands and almost as long since that brief and wonderful season spent at Tottenham in our Premier League.

We are talking about Germany’s latest superstar in the making Jamal Musiala, the 19-year-old midfielder who heads into the tournament in Qatar in the form of his life. It feels appropriate to ask whether Klinsmann can remember what it was like to feel the fearlessness of youth.

‘Hey I am still playing you know,’ he laughs. ‘I play in an over-45 team every Sunday morning here. It’s not going so well sometimes. The mind tells me one thing but the body doesn’t always follow.’

Jurgen Klinsmann has a decorated history with the World Cup, winning the tournament in 1990

Klinsmann is 58 now and has his own World Cup life story to tell. A winner in 1990 as part of Franz Beckenbauer’s West Germany team who eliminated Bobby Robson’s England at the semi-final stage, he was also prominent in the two editions that followed. Across three tournaments he scored 11 goals.

In 2006 he coached his country to the semi-finals of a World Cup it hosted. Eight years later, he took the USA to the last 16 in Brazil.

‘The World Cup has been part of my life,’ he tells Sportsmail. ‘There is nothing bigger than this. If you are lucky — and we were lucky in the 1990 shootout against England — then you can make a final or actually win it.

‘At the time you don’t realise what actually happened. You realise far later when you travel the world and bump into people who remember that specific moment of time.

‘They remember where they were when they watched it. They tell you their story and that’s fantastic. All over the planet.

‘You realise: “Woah, that was really something special” and that shows you the dimension of a World Cup.

‘It’s just enormous. It’s by far the most special thing that can happen to you as a footballer.’ 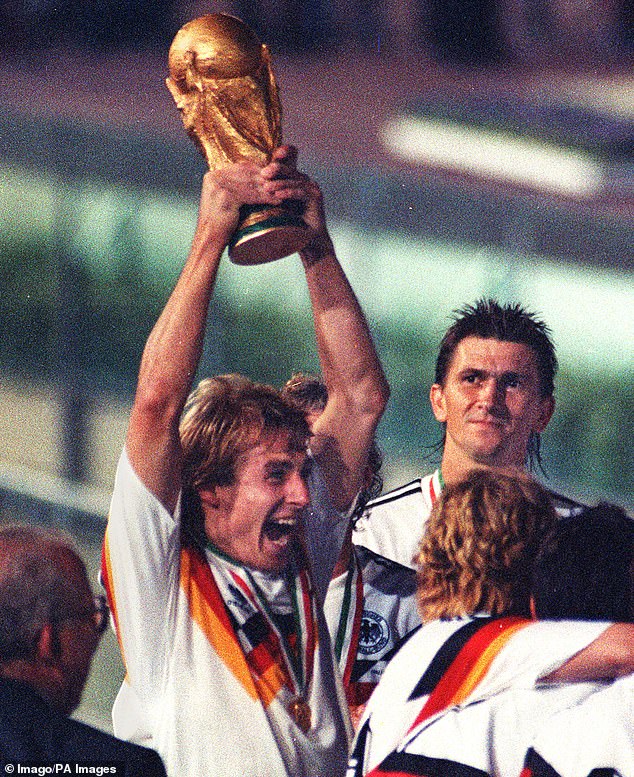 Klinsmann will be in Qatar as a pundit for the BBC. His latest coaching role was a brief spell at Hertha Berlin that finished two and a half years ago and he does not consider that part of his life to be altogether done.

‘You never know, you may see me pop up in England,’ he smiles.

But for now he will be on the sofa. He says he rates England’s chances. The key, he thinks, is to embrace the pressure.

‘A big part of your coaching work at a World Cup is people management,’ he explains. ‘They are all fantastic footballers. But the sporting world is still one of a certain hierarchy and as a manager you have the task day in day out of feeling that energy and camaraderie. Of understanding all the egos and keeping them under control and moving forwards. This is the biggest task.

‘But it’s an honour and a pleasure. These few weeks are what you live for, what excites you and pumps you up. You don’t need much sleep over these five weeks, I promise you.

‘If I look at England, the squad knows it is strong. It has proved it over many years. There is a progression in place.

‘The same thing exists with Germany, Brazil, Argentina and Spain. They go to World Cups to win. England are in that company now. 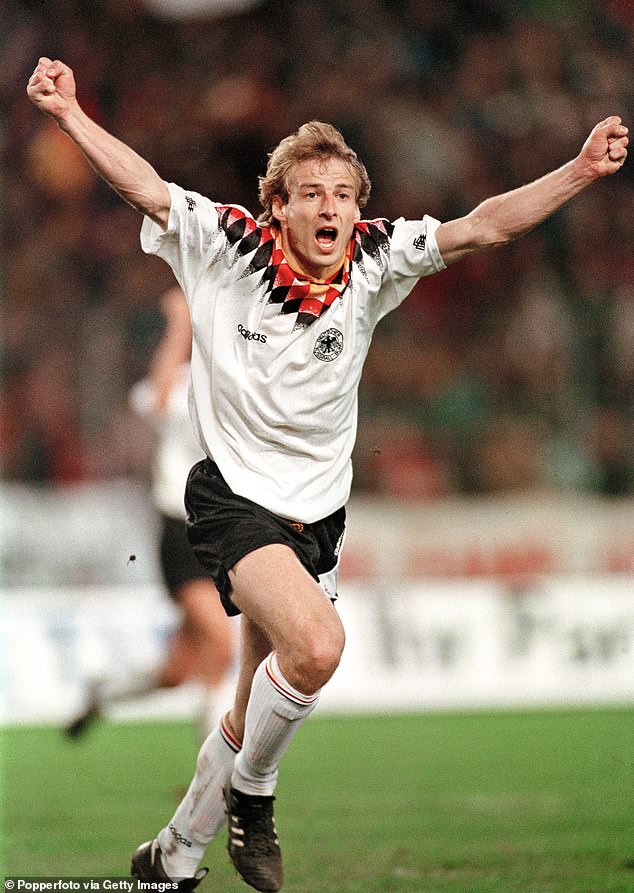 ‘This is their moment to catch. The pressure is there but it’s nothing to get too nervous or stressed out about. The players have to prove their point every couple of days in the Premier League and the Champions League and they do it.

‘Now it’s their time to come together for their country and make things happen on that stage too. But if they do it with a smile it will be easier, I promise.’

Central to England’s plans and hopes will be Harry Kane, a player with whom Klinsmann can identify. It is strange to learn now, for example, that the 1990 World Cup was the first major medal of the great German forward’s career.

When he joined Spurs from Monaco for £2m in 1994, he was 30 and had just one Italian Cup and one UEFA Cup, both won with Inter Milan, to his name.

‘Harry is admirable,’ he says. ‘He is a complete No 9 and in the top five in the world. But we have suffered a bit for him because he is the kind of player for whom you wish trophies, you know.

‘He gets closer and closer to do so with Spurs. Spurs have the capability of winning things now. They have the infrastructure and a beautiful stadium. But obviously he has that hunger for winning trophies and maybe it’s the moment now that it will happen for him in Qatar.

‘I was actually in a similar situation when I played for Spurs. I left after a year because I got a call from Franz Beckenbauer at Bayern Munich and couldn’t say no because I knew I would immediately win things, which I did. 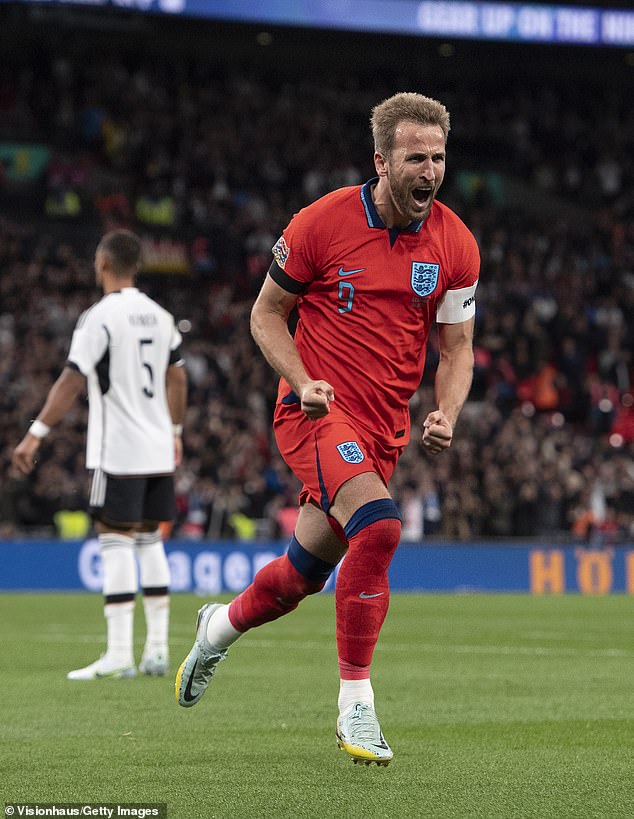 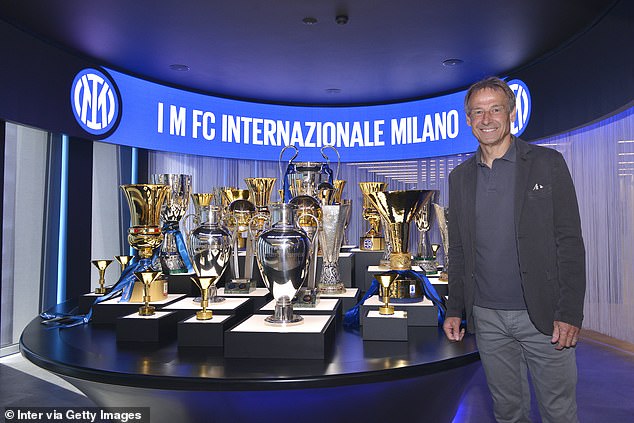 Kane is a player with whom Klinsmann can identify with, with the Spurs star failing to win a major trophy in his career so far – the German was in a similar position during his time playing

‘When Harry gets those calls from other clubs he maybe gets nervous because they give him a higher probability to win trophies. But he is in a good spot, still, and hopefully it happens this season.

‘I won my first big trophy when I won the World Cup so it can happen. I keep my fingers crossed for Harry from that point of view. Maybe this can be it for him.’

When he looks at the Premier League and the standard of English players, Klinsmann sees steady improvement.

‘It’s not long balls and second balls any more,’ he says. ‘It’s changed dramatically. You keep the ball on the ground now. It’s very fast but also technical.

‘English players have always been gifted. They also have that physicality and have that rhythm of playing constant games.

‘The Premier League has standing ahead of the other big European leagues now. They are trying to play catch-up but there are financial dynamics that make that impossible.

‘It’s not a coincidence that you now have an English side who are capable of winning the World Cup.’

Klinsmann played his part in dragging English football somewhere new and different. When he joined Tottenham, he arrived in a league in which foreign players were still a minority. When he made his debut at Sheffield Wednesday in August 1994, he was one of only three on the field.

‘You have to give Alan Sugar all the credit,’ Klinsmann laughs. ‘He took the risk to take a German to England! For me it was just a wonderful experience. 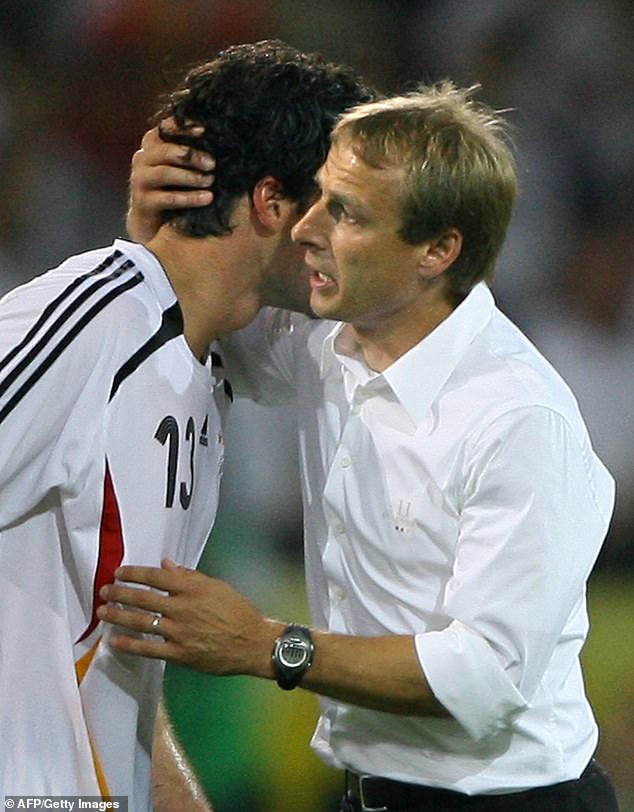 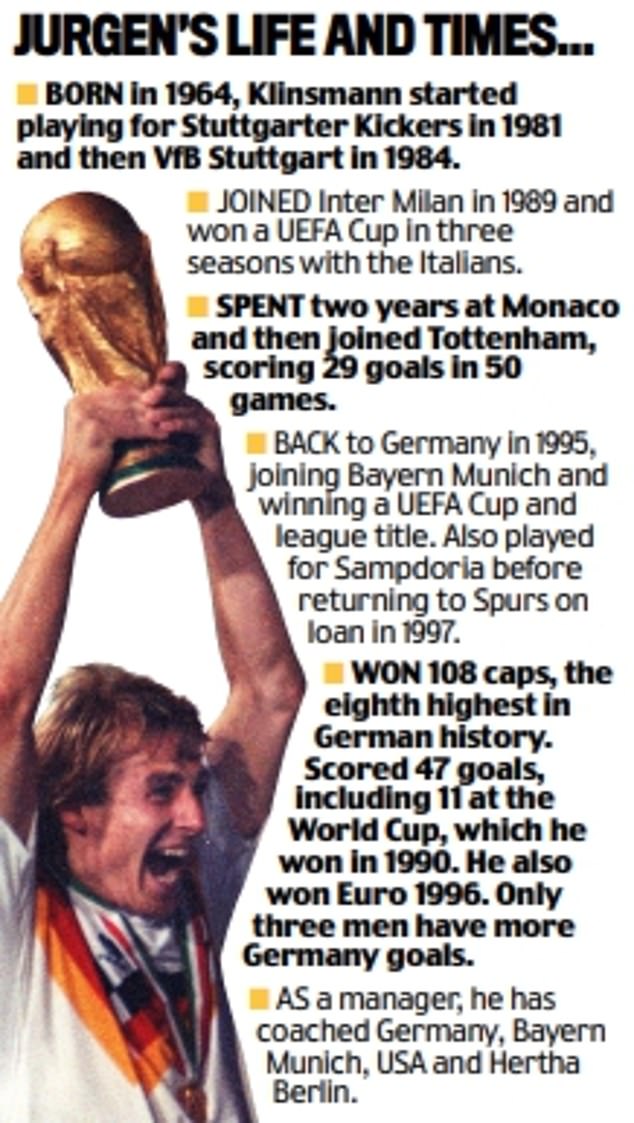 ‘We always watched the English football when we grew up on the TV. I watched Liverpool, Kevin Keegan was one of my idols.

‘So my admiration was always there and when I got the opportunity to come I did. I learned about all the little cultural things that make our two countries different and I just loved it.’

Klinsmann’s debut provided one of the Premier League’s iconic moments. Having arrived with a reputation for diving, he scored the winner in a pulsating 4-3 game and then celebrated by throwing himself full length across the turf at Hillsborough.

‘That was Teddy Sheringham’s idea,’ Klinsmann smiles. ‘We drove up to the first game in the bus and thousands of Sheffield Wednesday fans were holding up signs with 5.7, 5.8 and 5.9 on.

‘My team-mates were cracking up. “This is your welcome message,” they said.

‘Then Teddy said that if I scored we should all do the dive. I said, “Absolutely” and it became a fairy story for me because I was able to do it.

‘A couple of days later Teddy’s son told him I had to do it again as apparently all the kids in London were doing it in the parks and everywhere. Then came the next game against Everton at home and I did a bicycle-kick goal and we did it again. 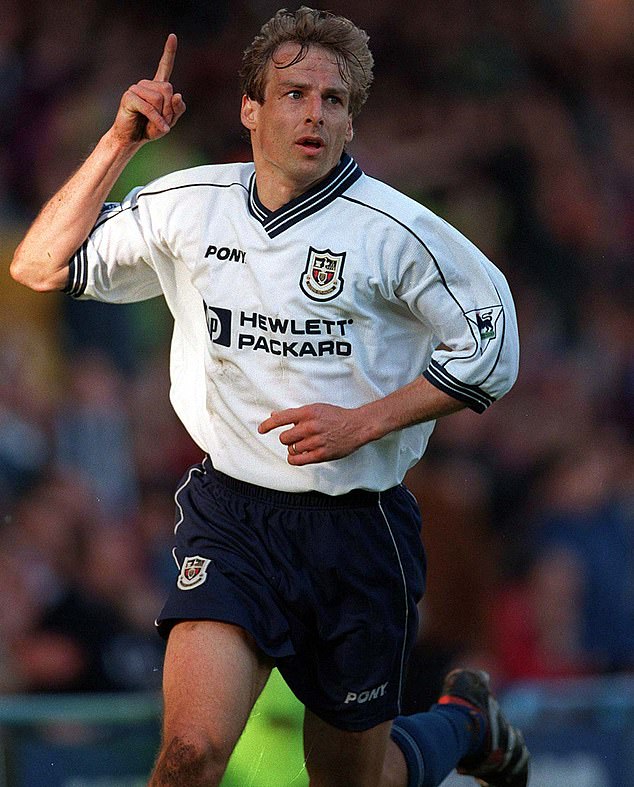 ‘They are such fantastic memories. Living in England taught me so many life lessons and how to understand the sense of humour.

‘First I was getting provoked but my friends told me never to feel insulted. They said to try to top it instead and that is what I managed to do. But yeah, it’s all thanks to Teddy.’

Few players embraced English life and culture like Klinsmann did. He even returned to Tottenham for loan spell in 1997.

‘I just hoped people would take me the way I was, despite my German background,’ he recalls. ‘I am so thankful for football that it gave me the chance to live in other countries.

‘Italy, England and France and then I moved here to California later on because I bumped into a Californian girl one day.

‘I learned so much from life in London. I still feel I am one of them at Tottenham. I go back, walk up the High Road and have fish and chips and feel I belong. This is the beauty.

‘For foreign managers and players who came to England, they have similar experiences. They changed as people. Players like Vialli, Zola and Gullit.

‘They adapted themselves to the English way of life and to football. Maybe in return they helped to give the Premier League a new face as well.’

England’s World Cup begins on Monday with a game against Iran. USA and Wales will follow.

For Germany, it’s tougher. Their group contains Spain, Costa Rica and Japan. Klinsmann is optimistic about his country’s chances though and is enthused by young Musiala, who chose to play for Germany over England.

‘He’s phenomenal, a unique talent,’ he says. ‘If he plays like he does for Bayern Munich and keeps his lightness and his easy way of doing things, then I think we are going to see a jewel coming out in this World Cup.’

As for England, he envisages a harder game against his country of residence than perhaps we do.

‘Don’t underestimate the USA,’ he warns. ‘It’s not gonna be that straightforward for you.

‘It’s a young group of players but it’s a talented group and for the first time in American history they have players in big Champions League teams.

‘We — and I say that because I live here — have always had good players like Tim Howard, Clint Dempsey and Claudio Reyna but never at the highest category of clubs. That has changed now.’ 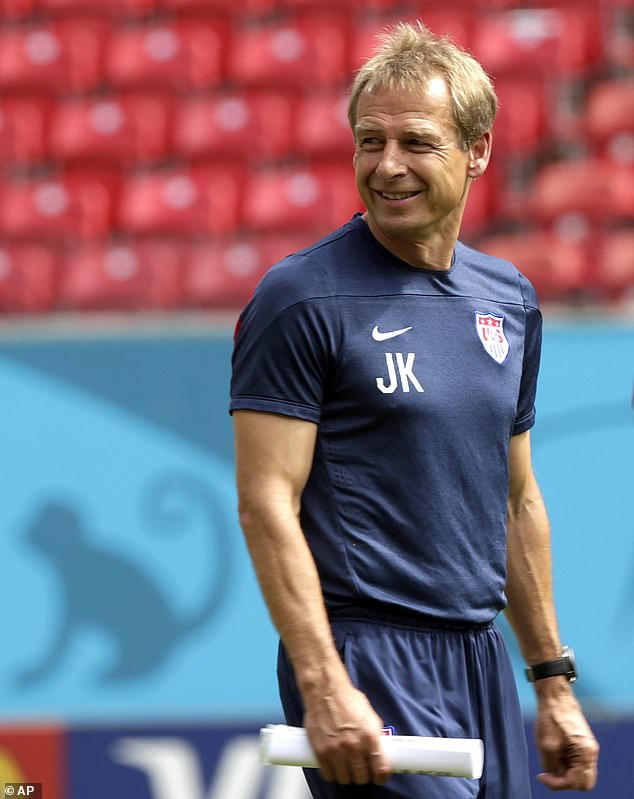 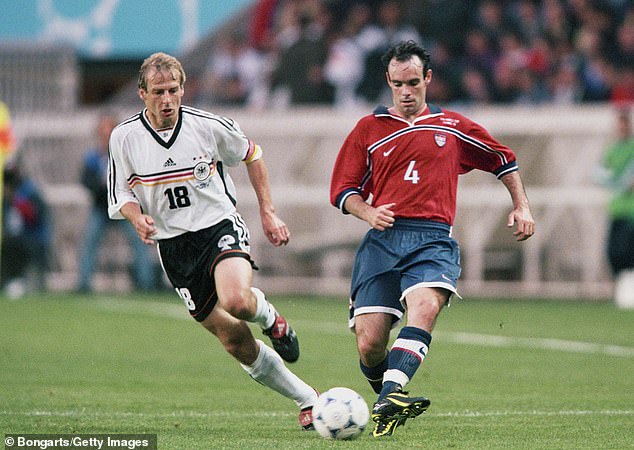 Ahead of a World Cup that promises to be like no other, there is talk of the workload placed on players.

Kane, for example, has played 22 games this season. Klinsmann, though, sees it differently. He believes the non-existent break between the pausing of domestic seasons and the tournament will be noticeable in the standard of football.

‘I saw that Harry played in the League Cup,’ he laughs. ‘But these days the players feel very responsible for their clubs. They get huge wages and they know that.

‘They want to deliver to their club teams and fans, but at the same time right now they will want to keep their rhythm going into the World Cup.

‘If I was a player I would have wanted to play in that League Cup game. It’s another game that takes you into a tournament fully in a flow.

‘That’s what makes me really excited about this World Cup. Players are coming with their club rhythm and they can take it into the tournament going at full speed.

‘So with that in mind I think we are going to see a World Cup of really high quality in Qatar. I am just excited.’

You can enjoy the World Cup on the BBC across TV, iPlayer, BBC Sounds and the BBC Sport App.