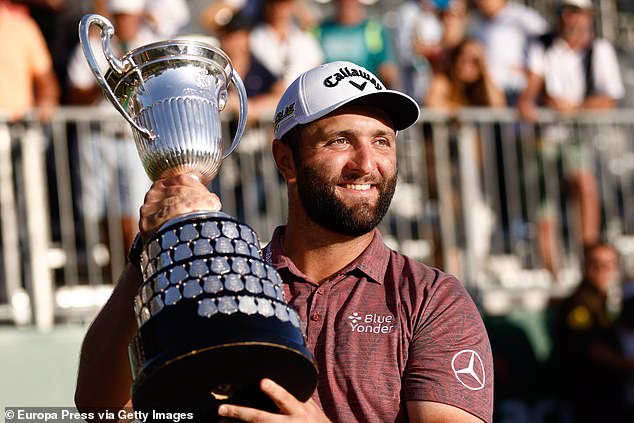 By David Kent for the Daily Mail

Spain’s Jon Rahm cruised to a third Spanish Open title to match the tally of his ‘great hero’, Seve Ballesteros.

Rahm carded an eagle and eight birdies in a closing 62 at Club de Campo in Madrid to finish 25 under par, six shots clear of France’s Matthieu Pavon.

Ballesteros, who died in 2011, won his national open in 1981, 1985 and 1995 and Rahm had been a prohibitive favourite to emulate his compatriot, but the 2021 US Open champion fully justified that status in front of an adoring home crowd.

Asked how special the victory was, Rahm told Sky Sports: ‘You might need to ask me in a few days because I take quite a while to process these things.

‘It was the goal coming in; Seve is a great hero of mine and to do something he took his whole career to do in just a few years is quite humbling, I’m not going to lie.

‘I understand it might not be the strongest field I play all year but sometimes these can be the hardest to win. I’m at home, I’m supposed to win, everybody is betting on me to win and to come out and play a Sunday like I just did is hard to describe.

‘It’s my lowest score out here, it was pretty much a perfect week. The only thing that would make it better is if my wife and kids were here but I have a lot of family here that I don’t see throughout the year to celebrate with.

‘It’s emotional. Going up the 18th hole I knew what was about to happen and to get it done like that, I can’t describe it.’

Rahm took a one-shot lead into the final round and quickly doubled his advantage with a birdie on the second, before picking up further shots on the sixth and seventh. 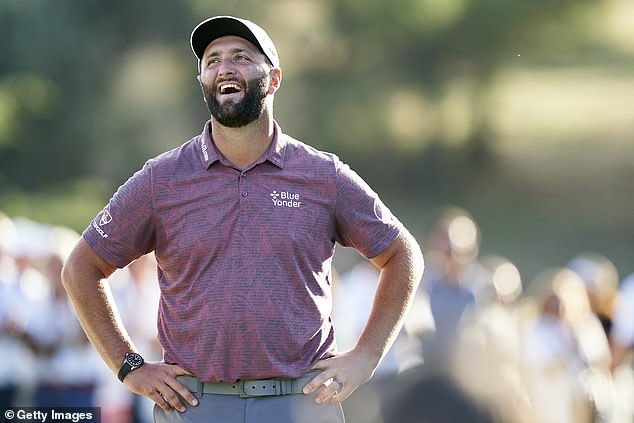 Playing partner Min Woo Lee kept up the pressure and closed to within a shot thanks to a birdie on the sixth and an eagle on the par-five seventh, only for Rahm to pull away with birdies on the ninth and 11th.

A bogey on the 12th briefly halted Rahm’s momentum but he responded with a birdie on the next and then almost made an albatross on the par-five 14th, his approach from 208 yards hitting the pin and finishing just five feet from the hole.

The resulting eagle put the result beyond any doubt and Rahm signed off in style with birdies on the 17th and 18th, while Pavon’s flawless closing 65 secured his third runners-up finish on the DP World Tour.

Lee finished a shot behind Pavon in third, with Ryder Cup vice-captain Edoardo Molinari and Zander Lombard two strokes further back in a tie for fourth.

Rahm’s win will take the 27-year-old from sixth to fifth in the world rankings.