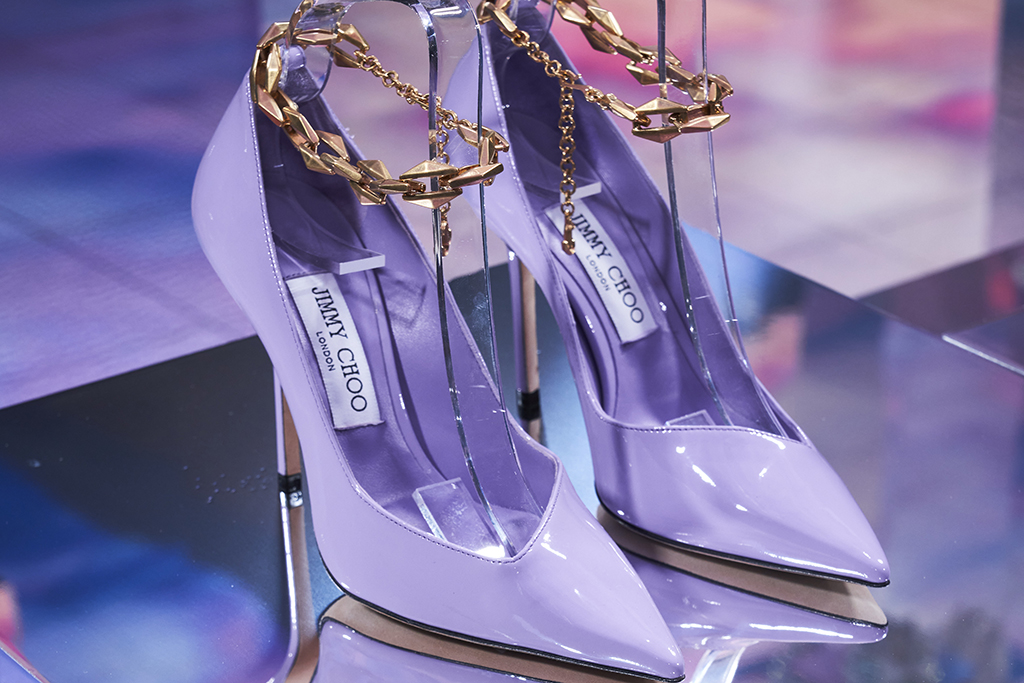 Inspired by fantasy figures of Manga and anime fiction, Choi said the new season is all about exaggerated proportions. “The height is higher, the length is bolder,” she said. “Sensory experiences are heightened, fantasy is pushed. It’s about living in a dream and dreaming up everything you want to be. If I’m given the right thing, I can actually go and do whatever I want.”

Choi took the idea of the diamond — a brand emblem — into new territory this season with the launch of the “Diamond” chain family. Fashioned in matte gold hardware, it evokes the surface of a brilliant-cut diamond, the designer said. The chain plays a starring role in shoes, jewelry, bags and other accessories — taking different forms depending on the look.

For example, it becomes an anklet on a sharp stiletto pump and is used as a striking ornamentation on a block-heel loafer and a sky-high patent version with a 140 millimeter heel.

Denim is another key story in the collection and incorporated across both classic styles and new platforms — evoking Y2K nostalgia for the creative director.

“It’s about blending denim day to night, denim that is a little bit more creative, a bit more innovative” she said, pointing to boot with a paint-sprayed effect.

Jersey was another interesting material story. Choi noted that the sporty fabric traditionally used in daywear, can take on a formal and elegant appearance when intricately looped together on a sandal.

While Choi was eager to look forward to spring ’23, she’s also looking back at the incredible reign of Queen Elizabeth II.

“She was so inspirational, and now that she is gone, we’ve discovered even more so what she was capable of. There’s only one Queen.”

Choi was flying to New York on Sept. 19, the day of the royal funeral, but didn’t miss a moment. “It was majestic,” she said.