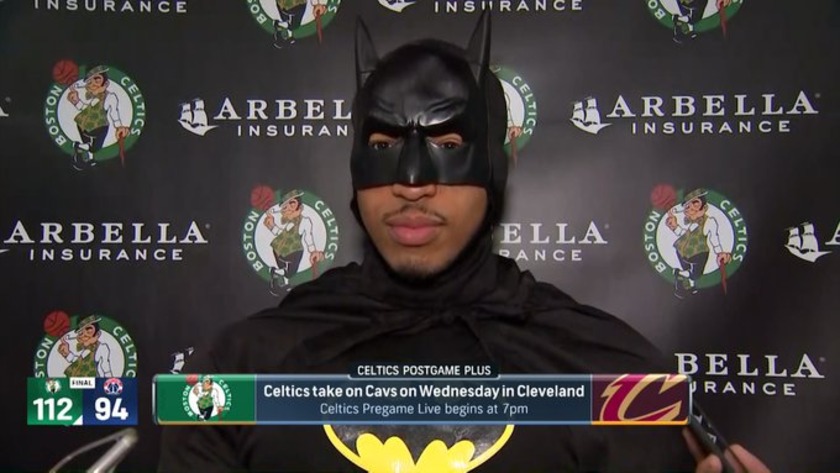 Grant Williams is the hero Boston deserves — just not the one Jayson Tatum can deal with right now.

Williams fully embraced the Halloween spirit for the Celtics’ game against the Washington Wizards on Sunday, arriving to TD Garden in a full-length Batman costume.

But Williams didn’t stop there. Not only did the Celtics big man put his Batman costume on after Boston’s 112-94 win, he conducted his entire postgame interview in a deep Batman voice while giving Batman-themed answers.

While Williams’ act drew plenty of laughs from reporters, Tatum was NOT having it as he walked by off-camera.

“Bro, what the f— are you doing?” Tatum asked, prompting a laugh from Williams.

To Williams’ credit, though, he soldiered on with his Batman impersonation to give some pretty creative answers to reporters’ questions.

“We kept Boston safe,” Williams replied when asked how he felt about the Celtics’ win.

“… We’re just as good in the lights as we are in the darkness. It’s the best to have two guys, Superman (Tatum), Green Lantern (Jaylen Brown), do our best job as a league to not only keep this team secure, but this city safe.”

See also  Celtics star could return in 4-6 weeks, per report

Brown, who revealed the origins of Williams’ “Batman” nickname last season (for Williams’ strong defense against “The Joker,” aka Denver Nuggets star Nikola Jokic, also got in on the fun on social media.

Williams was the only Celtic who dressed up in a Halloween costume, so props to him for committing to the bit and delivering what Boston needed — 10 points and a pair of 3-pointers off the bench — in a bounce-back victory.