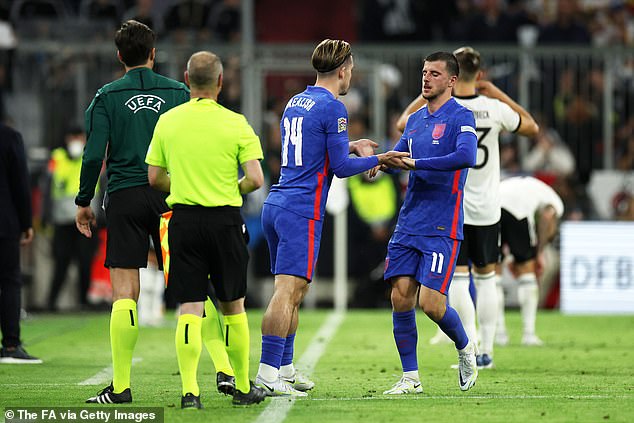 Back in November 2020, Gareth Southgate was able to laugh about ‘memes’ made to poke fun at his adoration for midfielder Mason Mount.

The Chelsea star has been nurtured and followed through England’s ranks by Southgate and, to be frank, Mount has never let the Three Lions down when called upon.

He has 29 caps to date, Southgate as a person is fiercely loyal to those who deliver for him and ‘memes’ soon became popular, after he answered a question about Jack Grealish by discussing Mount.

‘I suppose on that you’re referring to Mason, whose only crime is not to be Jack at the moment,’ Southgate joked.

‘I’m also aware I should talk about Mason because then it keeps the memes going of me talking about Mason,’ Southgate light-heartedly added.

It was a light-hearted quip with many Aston Villa fans irritated at Grealish’s lack of minutes in comparison to Mount. Now, the England boss will find himself shuffling much more uncomfortably as calls grow louder to propel Grealish in front of Mount. 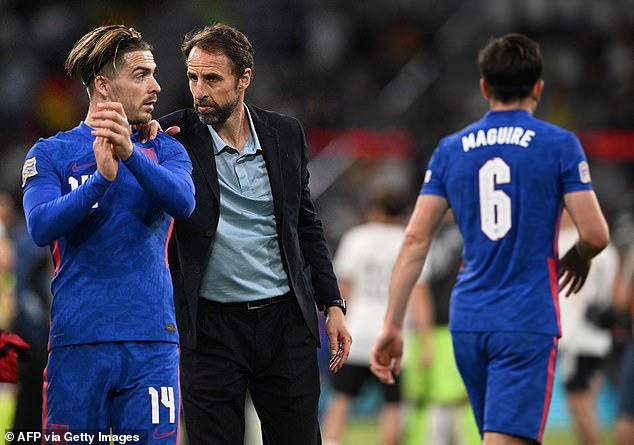 Returning to a tried-and-tested 4-2-3-1 it was once again Mount who got the start behind Harry Kane. He, too, started the 1-0 defeat to Hungary, playing wide left of Kane in a 3-4-3 system.

Caps No 28 and No 29 proved to be underwhelming for Mount, although many have fallen short of their levels in the last two games, given the tired legs piling up at the end of a long season.

But it is becoming inescapable that Southgate, as much as he is a fan of Mount, is simply not extracting the most out of him.

Not since November 2020 has he scored for his country and reflecting back on the European Championships, the last major tournament to use as a point of reference, he managed just one assist across five games.

This is not to bash Mount, who has emerged through Chelsea’s academy and into their first team as a fine player under Frank Lampard and now Thomas Tuchel.

But five months out from the World Cup in Qatar, Southgate is going to come under increasing pressure to turn to Grealish in a bid to spark life into his attack – at the expense of Mount.

Not that either player agree a decision needs to be made.

‘I’d never look at it as a rivalry,’ Mount said after a routine win over Republic of Ireland in 2020.

‘Jack? You know what he can do. He’s a world-class player that can create and score goals and that’s what we need in any England team. There are different players in this squad who can play in different positions.’ 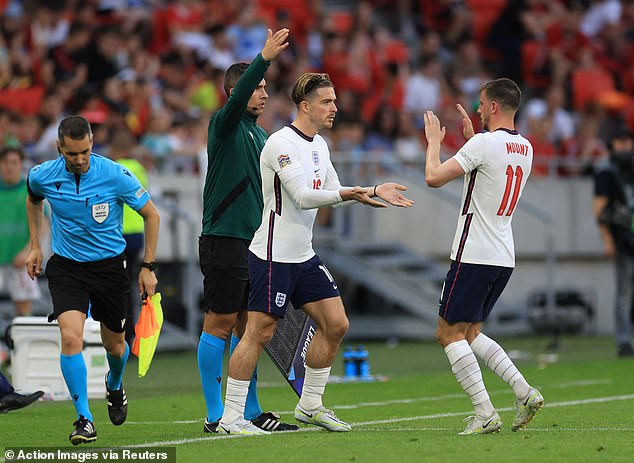 Mount (right) was also replaced by Grealish in Hungary, with the two seemingly an either-or

And Grealish, does he agree? You bet he does.

‘It’s a bit annoying actually because he probably gets a little bit of stick at times from it, but I’ve always been close with Mason, I think he’s an absolutely terrific player.

‘I don’t even think we’re really fighting for the same spot to be honest.

‘Like I said, I think Mason’s underrated and he deserves all the credit he gets. I think people that know about football will understand just how good he is.’

They can stress how much they are not in competition all they like, it doesn’t make the reality any less true.

In both games in the past week Southgate has turned to his bench in search of a difference, summoned Grealish and given Mount the signal his night is over.

With Jude Bellingham viewed as an option in a deeper role, Grealish and Mount will have months to now strengthen their cases to be starting in that first game in Qatar against Iran on November 21.

On the basis of Tuesday’s cameo against Germany, it is Grealish who is winning the public support.

The key difference, on the eye-test if nothing else, is that Grealish is the risk-taker, the maverick every top squad needs. 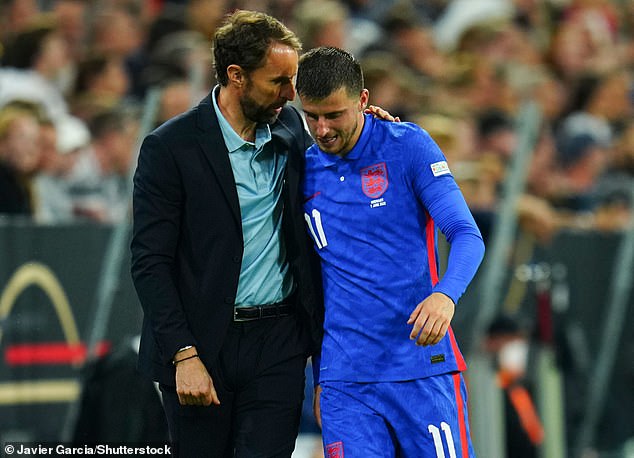 Mount, while he can be a threat and a facilitator as he has shown repeatedly at Chelsea, feels a much safer selection. He is diligent out of possession and is said to be a manager’s dream to work with.

Grealish, meanwhile, can be as great as he is frustrating.

Given 20 minutes at the Allianz Arena there was much more of the great than the frustrating. Despite such a limited run-out, the City man completely turned the game on its head, playing a key role in England salvaging a 1-1 draw.

Statistically Grealish did OK; a pass completion rate of just 71 per cent is nothing to write home about, but the eye-test told its own story.

Grealish was direct, as he often is, and drove England forward. There are few better ball-carriers in the squad than Grealish.

‘We’re not blind to a good player,’ Southgate said of Grealish back at that ‘memes’ press conference in 2020. He’s impossible to ignore now.

At 22 caps and just one goal – albeit many appearances have been limited minutes or, as was the case at Euro 2020, saw him subbed on, only to be subbed off again, in the semi-final against Denmark.

Grealish gets fans excited, a belief that he can take the game to opponents. Risk and reward, something that doesn’t feel very Southgate.

And that is the conundrum for the England boss. There is pressure aplenty heading into Qatar, as there always is with England at a major tournament, but will he compromise his more-often-than-not pragmatic approach to unlock Grealish?

‘The start of the game, the challenge to the wide players to attack, defend, try to score goals at a high tactical level and you’ve got to be spot on,’ he said when quizzed as to why Grealish started on the bench.

‘I think that’s an area Jack can get better at.’ 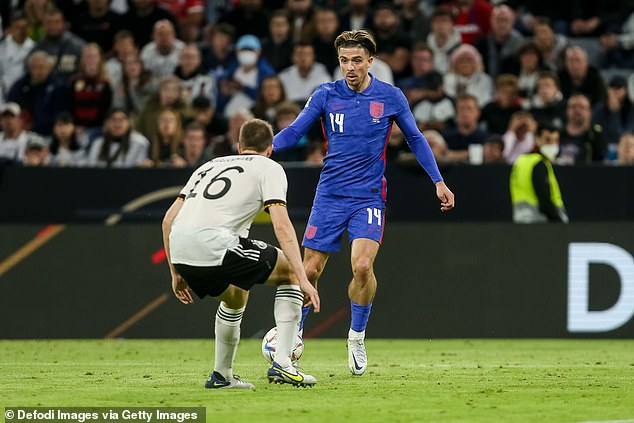 Grealish is more of a risk-taker than Mount, driving at opponents, albeit often late in matches

And there it is. While it would be unfair to suggest Southgate does not trust Grealish, it is plainly apparent that the gauntlet has been laid down. The City wide-man has to become a sponge to Southgate’s demands if he is to displace Mount as Plan 1A come the flight to Doha.

‘What he did do was carry the ball and at that moment of the game as it opens up there’s a little more space, a little more opportunity, and also that freshness,’ Southgate said, praising his impact off the bench.

‘The impact that he and Jarrod Bowen had was really important in those attacking areas. There is a good challenge there, good competition for places and we’ve got to keep pushing them.’

Momentum behind a player can change quickly and Southgate is likely to continue to show faith in Mount having been a supporter of his for so long.

But with Gary Lineker leading the calls for Grealish to get more game time, it is becoming harder and harder to block out the noise.

And no, they aren’t ‘different players’ in ‘different positions’. This is a decision Southgate is going to need to make. 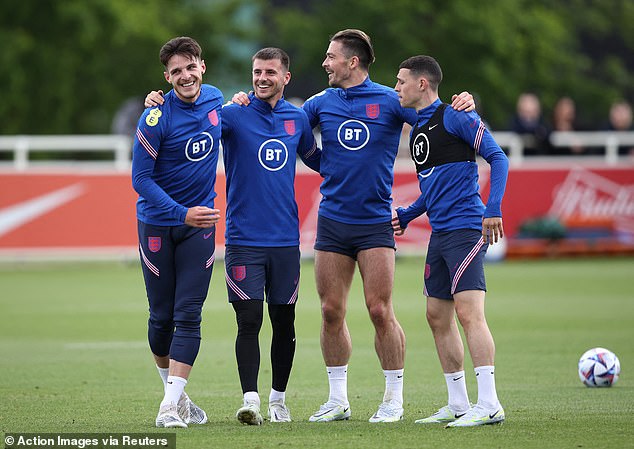