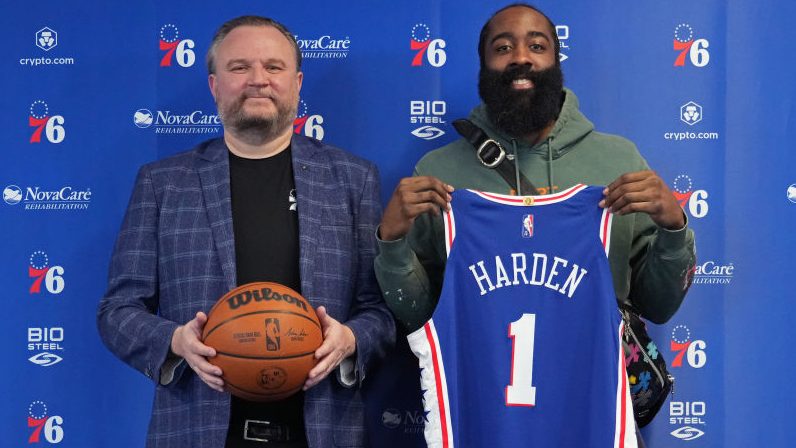 Daryl Morey would do it all again, exactly the same way, and live with the outcome 100 times out of 100.

He’s not alone: If two second-round picks are the price to round out a contending roster, 29 other GMs would have done the same thing.

Which is why the tampering rule and its enforcement needs to be reviewed and altered as part of the new CBA.

The 76ers potential tampering was the focus of a four-month NBA investigation that ended on Monday. The league announced it had “rescinded” the Philadelphia 76ers’ second-round picks in 2023 and 2024 due to tampering last summer with P.J. Tucker and Danuel House, Jr., saying they spoke to them before the July 1 allowable date.

Of course they did — everybody talks to everybody before July 1. What Morey did not was the norm, not some one-off violation of the rule. The NBA’s tampering rules are more like speeding on the highway — everyone does it, just don’t stand out and get caught. Why do you think there is a rush of deals in the first 24 hours of free agency? If a GM doesn’t have a couple of verbal agreements for free agents lined up before free agency officially opens, he’s being negligent.

What Morey and the 76ers did is a perfect example — and an example of what is wrong with the rule.

If you recall, in June James Harden opted out of the $47.4 million final year of his contract and became a free agent. Morey quickly used the cap space Harden’s absence created to sign P.J. Tucker to a three-year midlevel exception contract (announced one minute into free agency) and soon after ink Danuel House Jr. A couple of weeks later, Harden re-signed in Philly for “what was left” of the space the 76ers had under the hard cap, or $33 million this season (with a player option for next summer, or he can become a free agent).

Did Morey and the players’ agents coordinate that free agency dance before the June 30 window opened? Of course it was.

The seasons for both Tucker and House ended when their teams were eliminated from the playoffs. While technically an NBA contract runs through June 30, once the Heat’s season ended in the playoffs his duties were over, he was just awaiting free agency. Why shouldn’t his agent be able to talk to other teams once he was eliminated? It’s not going to influence his play on the court, and he’ll be a free agent in a month.

There is a place for the tampering rule with players still under an active contract. For example, teams should not be able to contact the Bucks’ Giannis Antetokounmpo today and try and convince him to come play for them someday.

However, once the Bucks’ season and playoff run ends (whenever that is), the representatives of free agent to be Khris Middleton should be able to talk to other teams and discuss deals. The season has ended, what is the harm? (For the record, everyone around the league expects Middleton will re-sign in Milwaukee, but he would have options if he wanted to test the market.)

See also  Will Marcus Smart’s role with the Boston Celtics change this season?

And that’s not even getting into players recruiting other players, which is technically tampering but seldom enforced by the league.

The NBA’s current tampering rules are virtually unenforceable and are flaunted by both teams and agents. Bring the rule into the modern age, allow agents/players and other teams to talk once their season ends. Draw a better, clearer tampering line — then enforce that line. But do not keep the silly status quo system.

The Brooklyn Nets got a much-needed win thanks to Kevin Durant continuing to play at an MVP level, dropping 36 points on a feisty Pacers team Monday night.

That’s not what everyone was talking about.

A group of Jewish Nets’ fans sat courtside in Brooklyn wearing “fight antisemitism” T-shirts. This comes in the wake of Kyrie Irving stepping into another controversy when he shared the link to a movie — “Hebrews to Negroes: Wake Up Black America” — considered anti-Semitic and filled with other disinformation.

Irving has said he embraces all religions and defended his right to post whatever he sees fit on social media, but after being criticized by Nets owner Joe Tsai and talking about it with the team, he did take the Tweet down.

The Clippers’ offense has been dreadful this season, second worst in the NBA, as they try to blend last season’s ball movement and spacing with the isolation-heavy styles of Paul George and Kawhi Leonard.

But the Clippers leaned into George in isolation when they needed a game-winner on Monday and got it — George hit a game-winning baseline jumper over Eric Gordon with 6.2 seconds remaining, ultimately giving the Clippers a 95-93 win.

George finished with 35 points, and only two other Clippers — Ivica Zubac at 16 and Marcus Morris at 11 — scored in double digits. Kevin Martin Jr. led the Rockets with 23 off the bench.

Two bonus things to know: 1) Pascal Siakam remains red hot to start season and scored 31 as the Raptors routed the Hawks. This is a quality win for a Raptors squad in what will be a tight East (both the Hawks and Pacers are 4-3 so far).

2) The Jazz are not cooling down, they beat Grizzlies 121-105 And are now 4-0 at home and 6-2 overall. A healthy Lauri Markkanen continues to put up numbers for the Jazz and had 31 in this one. Ja Morant is still a force of nature and had 37 in the loss.