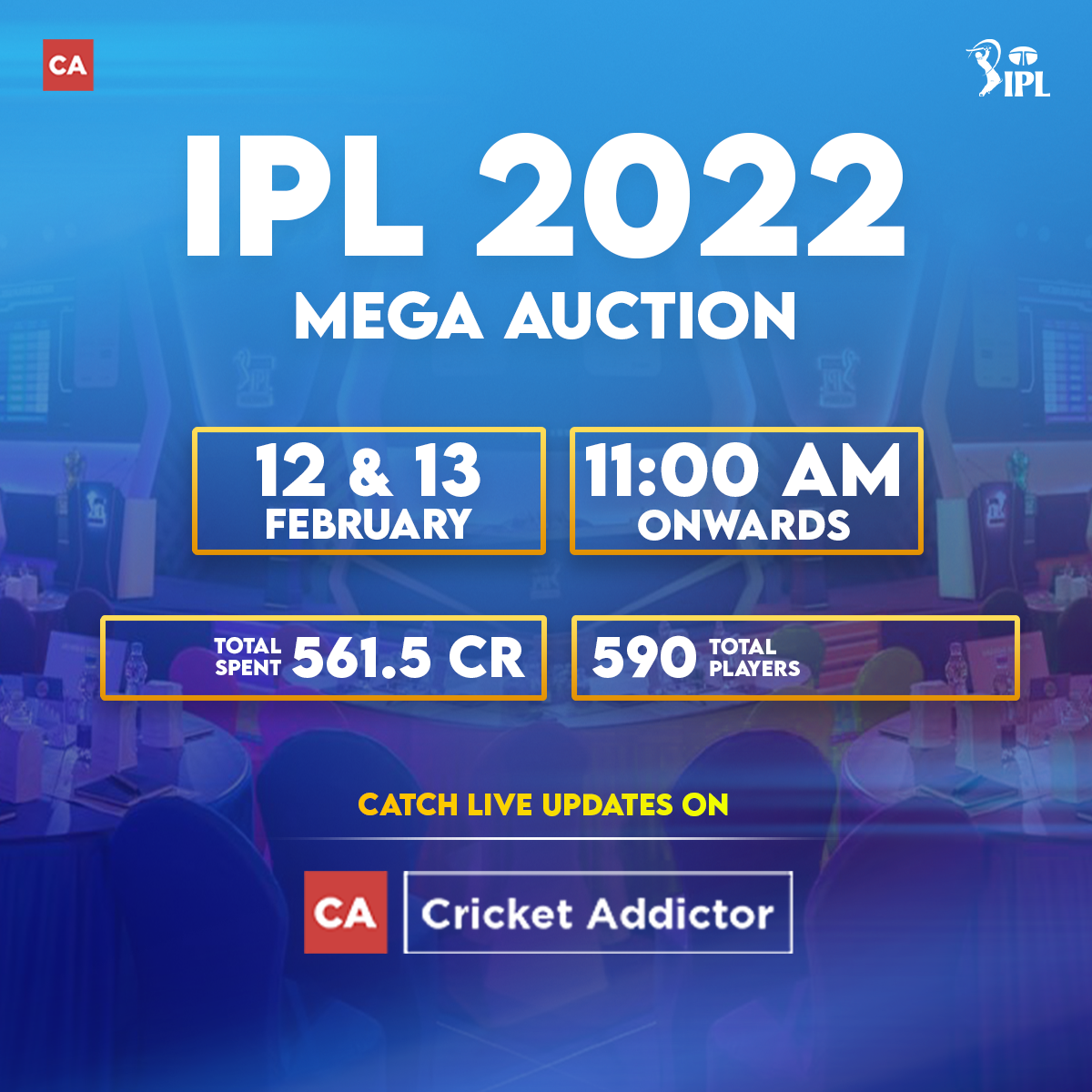 It has been the day of pacers in the IPL auction 2022. Deepak Chahar, Prasidh Krishna, Lockie Ferguson, Josh Hazlewood, Mark Wood, Harshal Patel, Jason Holder, Pat Cummins. The list just goes on and on. Wanindu Hasaranga became the costliest-ever Sri Lankan player with more than 9 Crores. Rajasthan Royals and Lucknow Supergiants seem the winner of the IPL auction 2022 so far.

Huge Edmeads is doing fine and he should be able to resume the proceedings on Day 1. Huge Edmeads is doing fine but Charu Sharma will take over the proceedings on Day 1 of the auction. Mumbai Indians broke the bank for Ishan Kishan who went at INR 15.25 Crores. CSK broke their bank for Deepak Chahar who was bought by 14 Crores.

Auctioneer Huge Edmeads has collapsed all of a sudden and the auction has gone on to hold. Lunch has been called on Day 1 of the auction. We will keep you posted with all the updates.

SRH opened the bidding for Wanindu Hasaranga and Punjab Kings entered the bidding straightaway. RCB joined the bid at 4.4 Crores and SRH went head-to-head with them. Punjab Kings bid 5 Crores for Hasaranga in IPL auction 2022 and then RCB went straight after him.  Hasaranga crossed the 10 crore mark too. Meanwhile, the auctioneer has collapsed all of a sudden.

Shakib al Hasan went unsold in the first round of the IPL auction 2022. RCB went after Harshal Patel at his base price of INR 2 Crores. CSK and RCB fought immensely for Harshal. SunRisers Hyderabad entered the bidding too for Harshal Patel. SRH and RCB were keen on getting their hands at ‘Purple Patel’. Harshal became the second player to reach double digits on Day 1 of the IPL 2022 auction. Eventually, Harhsal Patel was sold to RCB for 10.75 Crores.

The big news, however, in the second set of players was Suresh Raina, MR. IPL, going unsold. Dwayne Bravo had a reunion with CSK for 4.4 Crores. Steve Smith remain unsold in the first round too. Nitish Rana went back to KKR for INR 8 Crores. Jason Holder was bought by Lucknow Supergiants for 8.75 Crores in the IPL auction 2022.

The marquee set was dominated by teams like KKR and DC, and Punjab. KKR got Shreyas Iyer for 12. 25 Crores. KKR also bought back Pat Cummins but for almost a 50 per cent pay cut at 7.25 Crores. Punjab Kings bought Shikhar Dhawan for 8. 25 Crores. Rajasthan Royals got Ravichandran Ashwin for 5 Crores. Lucknow Supergiants added Quinton de Kock for 6.25 Crores and for the same amount Delhi Capitals got David Warner back.

With the Board of Control for Cricket in India (BCCI) looking to expand IPL to even brighter horizons, the board added two new franchises to the IPL set up this year in the form of Lucknow and Ahmedabad.

The acquisition for the two new franchises for IPL 2022 was done transparently through an auction process wherein, the Sanjeev Goenka-led RPSG Group, which had also been the owner of the Rising Pune Supergiants in IPL 2016 and IPL 2017  franchise, bought the Lucknow franchise and named it Lucknow Super Giants.

IPL 2022 will be a grand affair as for the first time in IPL history, a total of 10 teams will be contesting for the most prestigious franchise T20 league title in the world over a span of 74 high-octane matches. The BCCI is in complete readiness to bring the tournament back to India this year as the last couple of years, IPL has been held in the UAE due to the poor COVID-19 situation in India. However, the BCCI is certain that they will be able to go ahead with IPL 2022 in India until and unless the situation worsens.

Since IPL 2022 is going to be a one of its kind edition, the IPL auction 2022 also had to be among one of the most fierce auctions that we have witnessed in the history of the competition. Thus, the BCCI insisted on having a mega auction for IPL 2022. The IPL auction 2022 will get underway in Bangalore on February 12 and February 13 from 11 am IST.

All the team officials belonging to the 10 different franchises have already reached Bangalore and the city will be buzzing in the coming weekend with more than INR 550 Crores on the line being spent on a pool of players. Ahead of the IPL auction 2022, the BCCI had set some rules for all the franchises pertaining to the retention of the players. Each of the 10 teams was allocated with a pool of INR 90 Crores to formulate their squads.

As per the rules, all 8 teams belonging to the existing IPL setup could retain a maximum of up to 4 players ahead of the auction with each team retaining not more than 3 Indian players and not more than 2 Overseas players. For the 2 news teams, the BCCI had allowed the 2 new teams to retain 3 players from the list of released players by the 8 old teams with each of the 2 new teams not being allowed to retain a maximum of 2 Indian Players and 1 Overseas player.

While the Lucknow Supergiants went ahead with KL Rahul, Marcus Stoinis, and Ravi Bishnoi as their 3 retentions, the Gujarat Titans went ahead with Hardik Pandya, Rashid Khan, and Shubman Gill as their 3 retentions ahead of IPL auction 2022. KL Rahul was named the captain of the Lucknow Supergiants franchise and Gujarat Titans named Hardik Pandya as their skipper for the 2022 edition of the Indian Premier League.

Also, for the first time, the BCCI did not allow the franchises in IPL auction 2022 to have a Right To Match (RTM) card which would have allowed a lot of franchises to get a hold on some of their old players. There will be no RTMs in the IPL auction 2022.

As per the rules laid out by the BCCI, the following deductions were done out of the INR 90 Crores pool for each player that the franchises retained ahead of the IPL auction 2022.

If a team retained 4 players

If a team retained 3 players

If a team retained 2 players

If a team retained 1 player

The detailed list of registered players for IPL auction 2022 is as below:

A total of 370 Indian players and 220 overseas players will be up for grabs in what promises to be an action-packed IPL 2022 Player Auction in Bengaluru.

The country-wise breakdown of 220 overseas players is listed below:

The complete IPL auction 2022 Players List is as follows:

The hammer is all set to script the destiny of these 590 players on the 2 very exciting days of iPL auction 2022 lining up. Let’s witness history together and ascertain who has an upper hand going into IPL 2022. The IPL auction 2022 will be telecast live on the Star Sports Network and IPL auction 2022 can be live-streamed on the Disney+Hotstar app.

A: The IPL auction can be viewed live on the Disney+Hotstar app from 11 am IST. The live telecast will take place on February 12 and February 13 from 11 am IST on the Star Sports Network.

Q: How many players can be retained in IPL mega auction?

Q: Where can I watch IPL auction live?

A: As of now, the BCCI hasn’t confirmed the venue for the IPL 2022 edition. However, several members of the board, including the President, Mr Sourav Ganguly, has mentioned that BCCI’s top priority will be to organize IPL 2022 in India.

A: The IPL 2022 mega auction will be held for over 2 days on February 12 and February 13. Reportedly, 97 players will go under the hammer on Saturday and players 98 to 161 up till Sunday lunchtime.

Q: Will there be an auction for the next IPL?

A: Yes, the IPL auction 2022 is all set to take place for the IPL 2022 edition of the Indian Premier League. It will be a mega auction

Q. How can I watch IPL auction live?

A: The IPL auction 2022 will be live telecast on the Star Sports Network on February 12 and February 13 from 11 am IST and the live streaming will take place on the Disney+Hotstar app.

Q: What time is the IPL auction?

Q: Can I watch IPL auction on Hotstar?

Q: Where will the IPL mega auction take place?

Q: How many teams will participate in IPL 2022 mega auction?

A: A total of 10 teams will be participating in the IPL mega auction. This includes the 2 new teams in the form of Lucknow Supergiants and Gujarat Titans.

Q: How many players have been shortlisted for IPL auction 2022?

A: A total of 590 players have been finalized by the BCCI for the IPL auction 2022. These 590 players include 228 capped, 355 uncapped and 7 players from the associate nations.

Q: Can we watch IPL auction on Jio TV?

A: Yes, the IPL auction 2022 can be streamed live on the Jio TV app as it will be telecast live on the Star Sports Network.