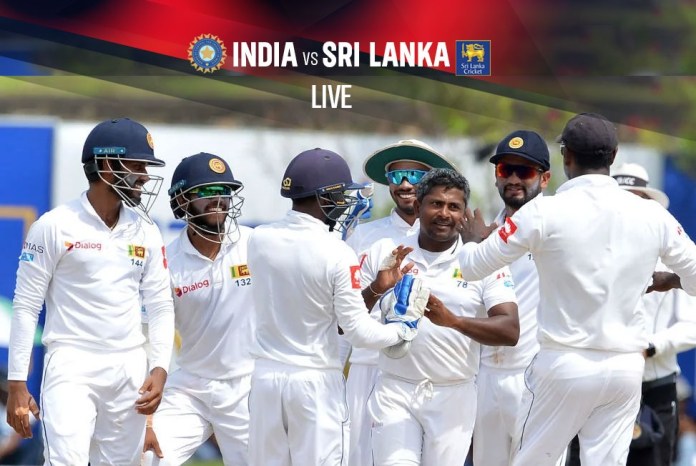 The visitors finally heaved a sigh of relief when Lahiru Kumara dismissed Rohit, who was caught by Suranga Lakmal at the fine leg, leaving the team’s total at 52/1. Following the skipper’s dismissal, Vihari joined Agarwal and kept the scoreboard moving for India. Agarwal was then sent back for 33 runs by Lasith Embuldeniya. His wicket meant Virat Kohli’s arrival, who is playing his 100th Test match.

Then, Kohli along with Vihari anchored the innings and ensured that there was no further damage.

Speaking at the toss, India skipper Rohit Sharma said, “We are going to bat first. Similar Indian conditions, so it’s important for us to put runs on the board and take it from there. It is a huge honour to be captaining India and be part of the list. It is something I never dreamt of. It has been quite buzzing. We know it is a special occasion. Not many people go on to play 100 Tests, and Virat has been looking forward to this game. We are playing three seamers and two spinners.”

See also  DC vs SRH: Had A Conversation With Rishabh Pant A Few Days Back In The Hotel Room

On the other hand, Sri Lanka skipper Dimuth Karunaratne said, “We wanted to bat first as well. We are playing three seamers, but it is a good wicket to bat on. We have played 300 Tests but we never won in India. We have a good team, with the senior and junior combinations and we are prepared. We are going in with three seamers and two spinners.”

Hanuma Vihari had scored unbeaten 40 and 20 in SA Test on his comeback after the triple fifties for India A. He had recently featured in Ranji Trophy for Hyderabad against Chandigarh and slammed a century and fifty in the same match.

Captain Rohit Sharma wins the toss and elects to bat first in the 1st Test.

A look at our Playing XI for the game.

Welcome to the live coverage of the 1ST TEST between India and Sri Lanka. https://t.co/XaUgOQVg3O #INDvSL @Paytm

Team India are currently ranked second in ICC Test Rankings. They are only 1 point behind Australia. A whitewash can help India take the pole position subject to Australia’s performances against Pakistan in the upcoming 3-match Test series. If India will win 2-0 then they will add 10 points but Australia can play spoilsport.

After taking white-ball captaincy by storm with a back-to-back whitewash against West Indies & Sri Lanka, he will kick start his Test captaincy against SL at Mohali. He will look to win his first series as red-ball captain against minnows.

With Cheteshwar Pujara & Ajinkya Rahane, Team India is expected to enter a new era. The likes of Ishant Sharma & Wriddhiman Saha have been also ruled out of the tournament. Shreyas Iyer and Shubman Gill are expected to play the role of India’s new middle order.

The legendary Sunil Gavaskar takes us through the run of emotions that @imVkohli could feel ahead of his 1⃣0⃣0⃣th Test. 🙌🙌 #VK100 pic.twitter.com/bzsh44xHXm

6 AM: We are just hours from Toss ahead of the opening Test. Toss coming your way at 9 AM.