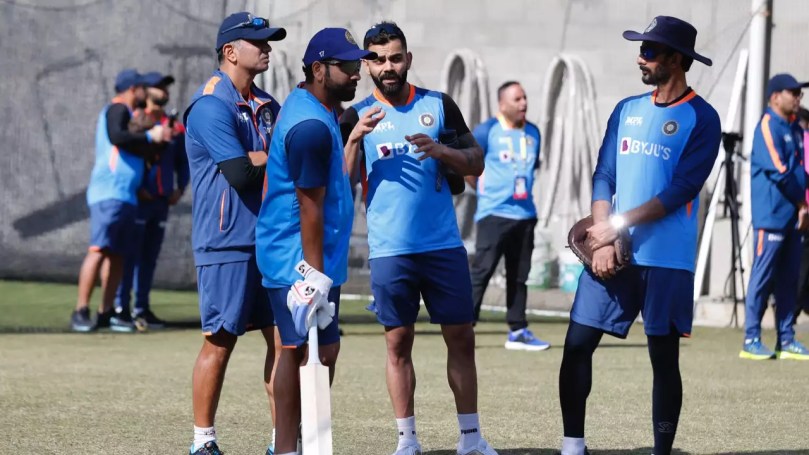 India England Semifinal LIVE –  ICC T20 World Cup 2022 – Indian team’s optional practice session at Adelaide, Oval has started. After minor injury scare to the captain Rohit Sharma, normalcy has restored in the Indian camp. Rohit was hit by a ball on his wrist scaring the entire Indian team. Indications coming in from the ground is that all is ok now with Rohit. Meanwhile as soon as Rohit reached ground – he was seen closely observing the Adelaide Oval pitch: Follow IND vs ENG LIVE Streaming and India vs England LIVEscore updates on Insidesport.IN

Rohit was one of three Indian squad members that turned up at the optional training session. Hardik Pandya and Dinesh Karthik were the others who batted against throw downs and the reserve bowlers Shardul Thakur and Mohammed Siraj.

The Men in Blue arrived in the city on Monday and rested for the day yesterday. The Indian team will face England on Thursday at 1:30 PM IST.

Rohit Sharma’s Injury Not Serious: As soon as Rohit got hit, he immediately stopped batting. Physio and support staff was seen attending to the Indian captain.

And now Rohit Sharma has left the net without facing another ball and it doesn’t look very good unfortunately #T20WorldCup pic.twitter.com/9wXbqA8qJw

He is back in the nets and is currently practising along with the rest of the members.

Team India’s first practice session in Adelaide has started. The entire team is at the stadium.

Team India will get their preparations up and running ahead of their semifinal clash against England. The Men in Blue will play Jos Buttler’s side on Thursday in Adelaide, with a mouth-watering prospect of an India vs Pakistan final clash alive. Rohit Sharma and Co arrived in the city on Monday following their convincing win over Zimbabwe on Sunday.

India have already played at the Adelaide Oval in this T20 World Cup, clinching a nervy win over Bangladesh. The Indian team sealed a five-run victory in a rain-marred game last week. As for England, Jos Buttler’s side have not played at this venue in the Super 12 stage and that plays in India’s favour.

Bowling coach Paras Mhambrey had previously suggested that all practice sessions for the team were optional meaning a host of top stars could opt out of training. The focus will be on Rohit Sharma as he looks to get past a form slump. The Indian captain has aggregated 89 runs in five games in what has been a dismal outing for the Hit-man.

Rishabh Pant and Dinesh Karthik will also be keen to impress with the competition for places in the side. Pant played in the game against Zimbabwe but failed to impress, meaning India are back to square one with their wicket-keeping problem. Karthik failed to make his chances count in the earlier games and Pant could be persisted.