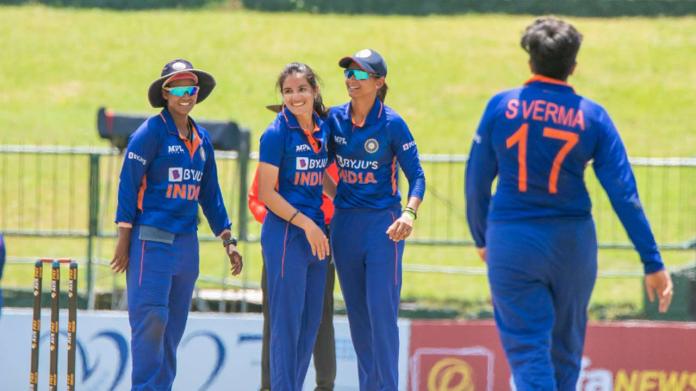 For Women in Blue, Harmanpreet Kaur and Shafali Verma played knocks of 44 and 35 respectively as visitors chased the target of 172 with 12 overs still to go. Earlier, Fiery knocks by Hasini Perera (37) and Nilakshi de Silva (46) went in vain as brilliant bowling by Renuka Singh and Deepti Sharma bundled out Sri Lanka to a modest total of 171.

📸 📸: Snapshots from #TeamIndia‘s winning start to the three-match ODI series against Sri Lanka. 👍 👍

See also  RCB vs GT: You Need To Understand Why The Expectations Are So High Of You

Chasing a total of 172, India had a decent start as their score read 37/2 after the first 10 overs in the match.

Smriti Mandhana and Yastika Bhatia fell early, but Shafali Verma kept things ticking over alongside Harmanpreet Kaur. The Indian captain and Harleen Deol put on a crucial 62-run partnership after the fall of the Shafali, racking up the runs at a fast clip.

Inoka Ranaweera created upset what had seemed to be a reasonably easy chase up until that point for India by claiming Kaur for a well-paced 44 and picking off Deol shortly after for 34. With just 34 needed to win and four wickets remaining, the Lankan spinner claimed her fourth wicket, that of Richa Ghosh.

With 12 overs remaining, Deepti Sharma and Pooja Vastrakar maintained their composure to see the innings through and give India the victory.

Opting to bat first, Sri Lanka got off a shaky start. Skipper Chamari Athapaththu was sent back to the pavilion after scoring just two runs.

India offered a good mix of spin with Deepti Sharma and pace with Renuka Singh but it bore fruit as the spinner dismissed Hansima Karunaratne in the 6.6 overs.

After the skipper’s wicket Sri Lanka batters struggled to cement their place on the crease as tight bowling from Indian bowlers restricted them to play big shots.

With the loss of five wickets, SL crossed the 100-run mark in the 28 over. Harshitha Samarawickrama and Nilakshi de Silva kept going with some solid strike rotation. Pooja Vastrakar provided her team with a wicket, dismissing Samarawickrama for a well-made 28.

Nilakshi de Silva was in red-hot form as she kept hitting Indian bowlers all around the ground but her reign on the ground was ended as Renuka Singh dismissed her, scoring 46 runs in 63 balls.

With the seven wickets down Sri Lanka’s score read 145-7 in 42 overs. Oshadi Ranasinghe and Rashmi Silva somehow tried to anchor the partnership to take their team to a modest total.

Singh struck against in the 44th over to totally dismantled Sri Lanka’s team, dismissing Oshadi Ranasinghe for eight runs.

Inoka Ranaweera then came to bat for the hosts. but the latter could not stand long as she was dismissed by Vastrakar. In the very next over Sharma delivered another blow to Sri Lanka as she removed Rashmi de Silva to restrict the hosts’ inning to 171 all out.