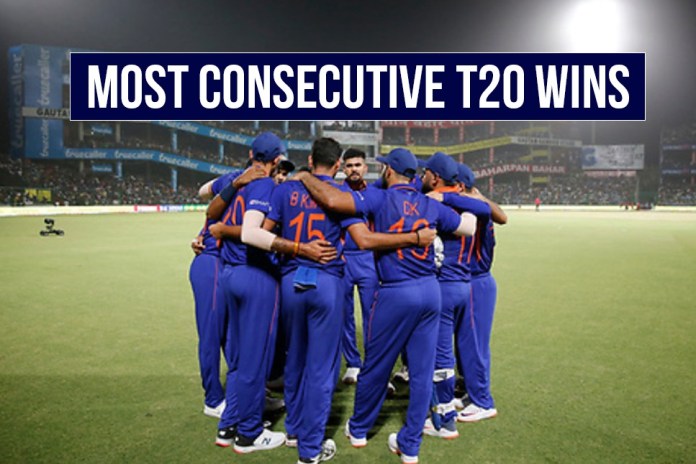 Most Consecutive T20 Wins: Team India are closing in on a major world record as the Men in Blue are one win away from registering the most consecutive t20 wins. Currently tied on 12 with Afghanistan, Rishabh Pant and Co need to defend 211 to break the record and etch their name in the record books. Follow India vs South Africa LIVE Updates on Insidesport.IN

World record chasing India put on a massive 210 on the board after being put into bat by South Africa in the 1st T20I at Arun Jaitley Stadium in Delhi. Ishan Kishan scored a stunning 76, while the likes of Hardik Pandya, Rishabh Pant and Shreyas Iyer chipped in with cameos to help the hosts put on a gigantic score.

India’s victory march began at the T20 World Cup 2021 against Afghanistan. After Virat Kohli made it 2-0 under his captaincy, Rohit Sharma continued the winning streak. Under his captaincy, India blanked New Zealand, West Indies and Sri Lanka in the T20I series to go 12-0 clear. Now, it is on Rishabh Pant to guide the team home on his India captaincy debut.