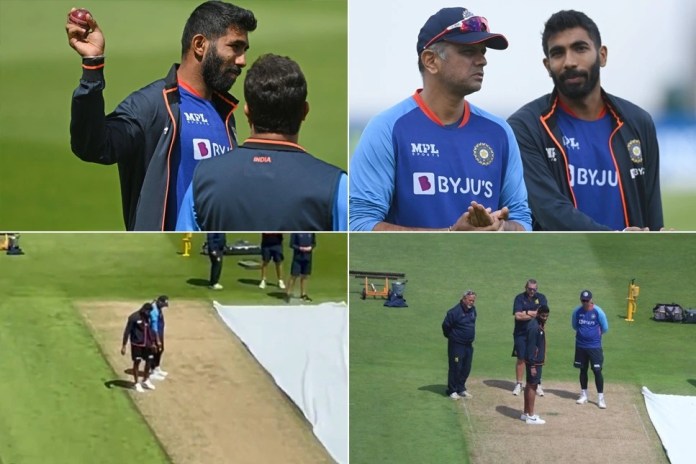 IND vs ENG LIVE Score 5th TEST – INDIA ENGLAND Edgbaston TEST LIVE: Never before has he navigated the choppy waters of leadership but Jasprit Bumrah will certainly like to showcase his captaincy acumen while leading a slightly under-prepared India against a vastly improved England in the rescheduled fifth Test, starting here on Friday: Follow India vs England 5th TEST LIVE Updates with InsideSport.IN

India were leading the five-match series 2-1 when multiple Covid-19 cases in their camp led to the postponement of the final game which was a part of the World Test Championship.

NEWS 🚨 – @Jaspritbumrah93 to lead #TeamIndia in the fifth Test Match against England.@RishabhPant17 will be the vice-captain for the match.#ENGvIND pic.twitter.com/ueWXfOMz1L

Nine months have passed since and a lot of water has flown through the Thames with the then captain Virat Kohli relinquishing Test captaincy. His successor, Rohit Sharma, is missing out on this game after testing positive for Covid-19.

Worse, Rohit’s designated deputy KL Rahul is also out after having undergone a surgery for sports hernia.

In this backdrop of the musical chair of Indian captaincy, the gauntlet has been thrown at Bumrah, arguably one of the finest fast bowlers in the history of Indian cricket and now set to be the 36th man to lead the national Test team.

He has been acknowledged widely as the undisputed leader of the fast bowling group but come Friday, the challenge against Ben Stokes’ side will be very different when he walks out for the toss at the Edgbaston.

Fast bowlers in Indian context have never been considered worthy of leadership contention and Kapil Dev, the world class allrounder, was more of a fast medium bowler in his prime and later a medium-fast as time progressed.

Javagal Srinath and Zaheer Khan, two fine exponents of fast bowling, were never even considered for vice-captaincy during their heydays. And hence, it took 35 years for India to have another pacer captain.

But leadership is an instinctive thing — some are blessed with that sixth sense and intuition, some are born gamblers and some become better as they grow on the job.

While this arrangement is a stop-gap one, Indian cricket establishment might have an idea of what can be expected of Bumrah when the time comes for the next change in baton.

The 3-0 demolition of New Zealand with three tricky chases completed in style has shown that England, under new coach Brendon McCullum, have de-constructed their style-sheet as far as Test matches are concerned.

Their batters are plundering opposition attack while there are lesser number of five-wicket hauls from the pacers if one goes by the statistics of the New Zealand series. It was Jack Leach, who had two five-wicket hauls and neither James Anderson nor Stuart Broad got their names on the various ‘Honours’ Board’.

The pitches have become a tad flatter, which is helping the batters and thus Bumrah, along with Mohammed Shami and Mohammed Siraj will have an onerous task of tackling a batting line-up bubbling with confidence.

Joe Root, after relinquishing captaincy, has found the touch that had deserted him and Jonny Bairstow, with the confidence of IPL, has scored nearly 400 runs at a strike-rate of 120 plus, unheard of in Test matches.

“England have done well as they won a couple of Test matches from positions where they could have potentially lost the games,” Indian coach Rahul Dravid told the mediapersons on Wednesday.

“We will like to focus on what our strengths are rather than thinking about opposition’s strength,” the head coach said, reminding one and all that India are still third in World Test Championship table (58.33 percentage points) behind Australia (75 percentage points) and South Africa (71.43% pts).

Team combination a worry for India

India will have to bat well and in absence of regular opening pair of Rohit and Rahul, who were fantastic during the four Tests played last year.

Coach Rahul Dravid expects a match-winning performance if not a hundred from Virat Kohli, who looked good in the practice game but the Test match will be a different beast altogether.

The practice game against Leicestershire was more of an extended net session and Indian teams, since Mahendra Singh Dhoni took over as captain, has hardly played official first-class games as a precursor to the Test matches.

James Anderson might be a month short of his 40th birthday but those magical wrists can still make the ball dart around and it will be a different experience for Shubman Gill or Shreyas Iyer.

Cheteshwar Pujara has scored a bagful of county runs but that psychological disadvantage of facing the very first ball of an innings, if he is asked to open, could clutter his mind.

Hanuma Vihari is a solid player but would need support from the other end, considering he has a defensive game.

It remains to be seen who will be India’s bowling all-rounder. Will it be Ravichandran Ashwin, who isn’t an automatic choice in overseas conditions or Shardul Thakur, who hasn’t done his chances any harm with some big-hearted efforts in SENA countries.

Edgbaston hasn’t exactly been a happy hunting ground for India where they have lost most of their Test matches but as it often happens with new beginnings, a new captain can always try to buck the trend.