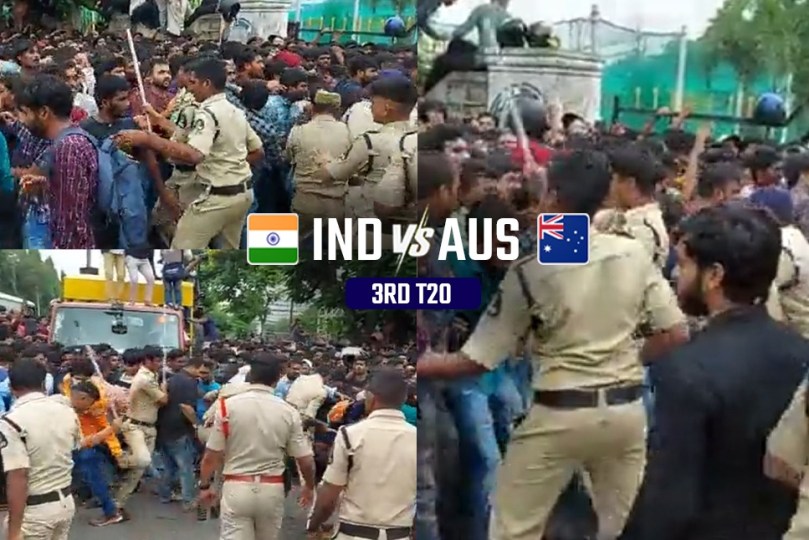 IND vs AUS Tickets: Police lathi charge fans in Hyderabad: In the last couple of days, cricket fans in Hyderabad have come out in huge numbers to get a India vs Australia third T20 ticket. The match is scheduled for September 25 at the Rajiv Gandhi International Stadium. But on Thursday, chaos broke out with fans being lathi charged outside the Gymkhana grounds, where tickets are sold. Local media has reported that more than 20 people have got badly injured. Some of them have reportedly been taken to a hospital as well: Follow India vs Australia T20 series live updates with InsideSport.IN

The video clearly suggest that the police have resorted to action, using their sticks. In fact, some of the fans fell to the ground as policemen used lathi to hit them.

The fans have been in queue for the India vs Australia third T20 tickets since 5-6 am in the morning. As the day progressed, it became longer and longer, which made matters difficult for the police to handle as well.

Such demand of tickets does not come as a surprise. Fans in Hyderabad have been deprived of such international cricket for the last three years. The blame for such kind of mismanagement should also go to Hyderabad Cricket Association. The state board should have been aware of the situation, and have made plans to smoothen the tickets process as well.

Hyderabad Cricket Association announced that ticket sales for the third match will start at the Gymkhana Ground in Hyderabad from Thursday morning. Hence, people flocked to the stadium from different parts of the city. The HCA were forced to make this statement as fans had come out on Wednesday to buy tickets. They had to head back home without getting any tickets for the match.

Why would you expect international cricket in #Hyderabad if the situation to buy tickets is like this? This is some reckless behaviour from #HCA. Those Chaos in secunderabad tells you how bad the management is. When you know you can’t control the crowd why don’t sell the tickets pic.twitter.com/ZMPl8YpbjG

The fans are not only from Hyderabad alone, some of them have even travelled from nearby cities to get hold of the ticket and watch their favourite players in action as well.