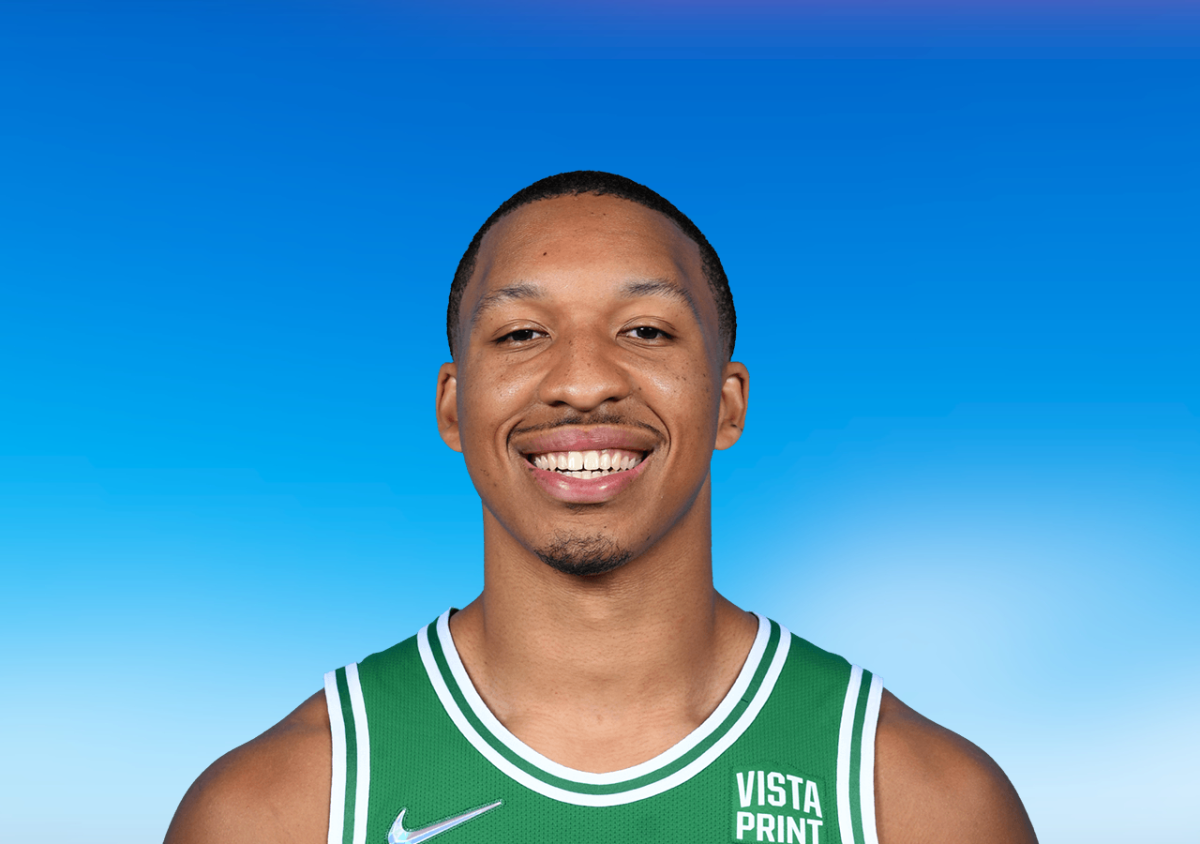 Jay King: Ime Udoka and Grant Williams played an April Fools joke where they faked a fight with each other. Udoka said none of the other players stepped in to break it up. He said a few players later indicated they wanted to see Williams get his ass kicked 😂😂😂
Source: Twitter @ByJayKing

John Karalis @John_Karalis
it’s a long shot, but Grant Williams has promised to die his hair pink or green (both, maybe?) for the playoffs if the Celtics starting 5 makes the All Defense team – 6:28 PM

Tim Bontemps @TimBontemps
Ime Udoka says he wants Jayson Tatum to strive for “10 to 15 triple doubles” in a nod to working on improving his passing/playmaking. Udoka said Tatum has made real strides in that department and wants to see him continue to. – 5:53 PM

Keith Smith @KeithSmithNBA
Ime Udoka and he Grant Williams staged a fake fight at shootaround today for an April’s Fools prank. They fooled both players and coaches. Udoka said no one stepped in to break it up because a few players said later that they “wanted to see Grant get his ass kicked!” – 5:53 PM

Jay King @ByJayKing
Ime Udoka and Grant Williams played an April Fools joke where they faked a fight with each other. Udoka said none of the other players stepped in to break it up. He said a few players later indicated they wanted to see Williams get his ass kicked 😂😂😂 – 5:53 PM

Keith Smith @KeithSmithNBA
Ime Udoka on Jayson Tatum: “He should aim for 10-15 triple-doubles (per season). That’s the kind of improvement he’s made in those areas.” – 5:50 PM

Keith Smith @KeithSmithNBA
Ime Udoka said the Celtics have gone through different scenarios with play vs rest, but that “With the seeding so close, it’s too early to determine that.” – 5:48 PM

Keith Smith @KeithSmithNBA
A few notes on the Celtics clinching a playoff spot:
-8th year in a row, 14 of last 15
-Marcus Smart has made the playoffs in all 8 seasons of his career. Jaylen Brown all 6 seasons. Jayson Tatum all 5 seasons.
-Ime Udoka is the 9th Boston coach to make playoffs in 1st season. – 10:03 PM

Keith Smith @KeithSmithNBA
Ime Udoka on Rob Williams: “He’s in the meetings, in the gym, and in good spirits. It’s about getting him around the guys and just getting that flexibility back. And then we can kind of build up pretty quickly from there.” – 1:40 PM

Keith Smith @KeithSmithNBA
Ime Udoka said that nine of Miami’s three-pointers last night came off defensive mistakes by Boston.
There were definitely some PnR coverages that resulted in some good Heat shooters getting looks. also, a few guys trailed around screens vs straight switching. Odd game for sure. – 1:09 PM

Jay King @ByJayKing
Ime Udoka said he wants to take a look at how Daniel Theis and Al Horford play together down the stretch of the regular season. Horford and Robert Williams have been a great combo for the Celtics, but obviously Theis brings a different dynamic there. – 12:57 PM

Keith Smith @KeithSmithNBA
Al Horford echoed Ime Udoka that this loss was a go lesson in what it will take to win in the playoffs. Both called Miami a “really tough team” and said this is the type of game Boston will have to play in the playoffs. – 11:02 PM

John Karalis @John_Karalis
Ime Udoka and Al Horford are both looking at this loss as a good lesson learned at a good time. They acknowledge the execution was poor but they l say this is a good thing for the team to go through – 11:00 PM

Keith Smith @KeithSmithNBA
Ime Udoka: “I told the guys that’s a tough team. They’re a good playoff team. It’s going to be tough like that in the playoffs.” – 10:24 PM

Keith Smith @KeithSmithNBA
Ime Udoka wasn’t happy with the Celtics composure: “We were complaining a little bit too much.” – 10:23 PM

Brian Robb @BrianTRobb
Ime Udoka: “We were complaining a little bit too much.” – 10:21 PM

Jared Weiss @JaredWeissNBA
Ime Udoka challenging a crucial charge call on Jayson Tatum on what looked like Max Strus still backpedaling, but Tatum threw out the elbow to push Strus and the call stands. – 10:03 PM

Mark Murphy @Murf56
Per the great Dick Lipe, Grant Williams missed his first home free throw of the season tonight. Was 26-26 prior to his one miss tonight. – 9:09 PM

Keith Smith @KeithSmithNBA
Out of the timeout, Udoka downsized again. Grant Williams has had a rough game so far, so makes sense to go with a lineup that worked in the first half. – 9:09 PM

Keith Smith @KeithSmithNBA
Ime Udoka made a good move to go small. Tucker doesn’t really move well enough to defend Tatum or Brown in space. And Horford is pulling Adebayo away from the lane.
When Grant is out there with Horford, Tucker has a much easier time. – 8:41 PM

Keith Smith @KeithSmithNBA
Ime Udoka sticks with his usual substitution pattern, with a twist: Theis on, Horford stayed.
Tatum out for White, as per usual.
Grant and Tatum will likely come back in for Horford and Brown before Q1 ends. – 7:59 PM

Mark Murphy @Murf56
A pair of unguarded Miami hoops from Bam Adebayo and Max Strus, and Ime Udoka calls his first timeout 1:08 into the game. – 7:48 PM

John Karalis @John_Karalis
Ime Udoka calls a timeout 68 seconds into the game after giving up two buckets to the Heat – 7:47 PM

Keith Smith @KeithSmithNBA
There were no new questions asked to Ime Udoka about the availability of Boston players to play in Toronto.
Udoka previously said “if healthy, they can all play”. There is reporting today is that Boston declined to answer vax status questions.
A couple of notes to follow.
1/2 – 6:02 PM

Keith Smith @KeithSmithNBA
Ime Udoka confirmed that Robert Williams had his meniscus trimmed based on the recommendations of his doctors. It was the Williams and the doctors’ call, not the Celtics. It was based on where the tear was located, not on Williams returning sooner with a trim vs a repair. – 5:56 PM

John Karalis @John_Karalis
Ime Udoka says the surgery on Rob to remove part of the meniscus was due to where the tear was, and it was the doctor’s decision based in that – 5:54 PM

Jay King @ByJayKing
Ime Udoka said Robert Williams had a piece of the meniscus removed, rather than repaired, because of where the tear was. Not because it would allow him to return sooner. – 5:54 PM

Anthony Chiang @Anthony_Chiang
The Celtics will start Grant Williams in place of Robert Williams at center tonight vs. Heat. – 5:51 PM

Jared Weiss @JaredWeissNBA
Jaylen Brown and Jayson Tatum are probable but will test their knees out pregame. Grant Williams will start next to Al Horford after Rob Williams was ruled out 4-6 weeks for knee surgery. – 5:51 PM

Jay King @ByJayKing
Jayson Tatum and Jaylen Brown will test out their issues before the game, but Ime Udoka is under the assumption both players will play. – 5:50 PM

Keith Smith @KeithSmithNBA
Ime Udoka said Jaylen Brown and Jayson Tatum are likely to play tonight, but they will both test it pregame to be sure. – 5:50 PM

Keith Smith @KeithSmithNBA
Ime Udoka on Robert Williams and optimism he can be back in 4-6 weeks: “There’s optimism because the surgery went as well as possible. He’ll hit the ground running with two-a-day work tomorrow. It’s the best-case scenario, given the injury.” – 5:48 PM

Chris Mannix @SIChrisMannix
Among the topics discuss with @Bill Simmons: Ime Udoka, who deserves a lot of consideration for Coach of the Year (yes, Monty Williams is going to win it).
Full: https://t.co/xAbP6EvzF2 pic.twitter.com/uCY7x3Cdjx – 3:54 PM

Jared Weiss @JaredWeissNBA
Celtics’ Grant Williams is one of the finalists for the NBA’s Twyman-Stokes teammate of the year award pic.twitter.com/CP33bOGH1x – 2:01 PM

Sam Amick @sam_amick
Ime Udoka is nothing if not direct. But you can’t coach that way if players don’t respect you.
So, how did he get these crucial Celtics relationships there so quickly?
“Well, the first thing was I wasn’t exactly new…”
($1/month subs right now)
https://t.co/v0C8HhUM5P pic.twitter.com/WEfChv3yGm – 11:40 AM

Sam Amick @sam_amick
The latest in my Unplugged series, at @TheAthletic…
Ime Udoka, who cut his playing career short a decade ago to dive into the coaching ranks, on his first Celtics season, the turnaround, and the player relationships at the center of it all.
theathletic.com/3218926/2022/0… – 11:26 AM

Jared Weiss @JaredWeissNBA
Loved this quote from Ime Udoka in his latest interview with @Sam Amick on @The Athletic:
“I am how I am — pretty direct with it. And publicly, privately, it’s all the same. We’re not sweeping anything under the rug.”
theathletic.com/3218926/2022/0… – 10:50 AM

Keith Smith: Marcus Smart: “I don’t know how else to say it, but I’m finally in the right position that fits me and helps the team.” -via Twitter @KeithSmithNBA / March 24, 2022

Back in November, Marcus Smart sent shockwaves across the Celtics roster when he publicly called out Jayson Tatum and Jaylen Brown after an ugly home loss to the Chicago Bulls. “I would just like to play basketball,” Smart said in November when asked about the Celtics’ late-game offense. “Every team knows we are trying to go to Jayson and Jaylen and every team is programmed and studies to stop Jayson and Jaylen. I think everybody’s scouting report is to make those guys try to pass the ball. They don’t want to pass the ball and that’s something that they’re going to learn.” -via Booth Newspapers / February 18, 2022

In an appearance on the Old Man and the Three podcast with JJ Redick this week, Tatum opened up about his reaction to that criticism. “It caught me off guard for sure,” Tatum said. “I think you have to understand, with being in the NBA, especially sometimes after — we had just blown an 18-point lead to Chicago. This was the beginning of the season, we were 2-5, everybody was frustrated and on edge a bit.” -via Booth Newspapers / February 18, 2022