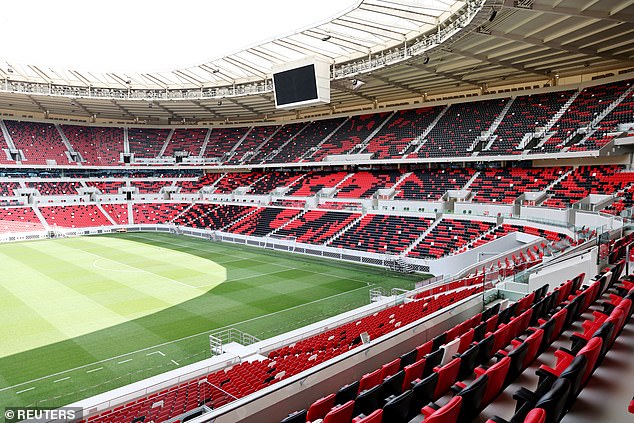 REVEALED: World Cup organisers have flown hundreds of tons of grass seed from the USA and faked winter to perfect pitches in Qatar… with a farm north of Doha the size of 40 pitches growing reserve grass just in case!

By Joe Bernstein for The Mail on Sunday

For the most lavish and controversial World Cup of our times, no expense has been spared in fulfilling that most basic of requirements for a major football tournament — the pitches.

Temperatures in the Gulf average more than 100 degrees between May and September, making the growth of ordinary turf complicated to say the least.

It is why millions of seeds have been imported, dozens of personnel employed and a large acreage installed with back-up pitches in case any of the main stadiums need relaying at short notice.

The fine detail of the operation is matched only by the staggering figures.

Hundreds of tons of grass seed have been imported from the United States on climate-controlled aircraft to fulfil the needs of eight stadium pitches — seven of them new — as well as 136 training grounds. 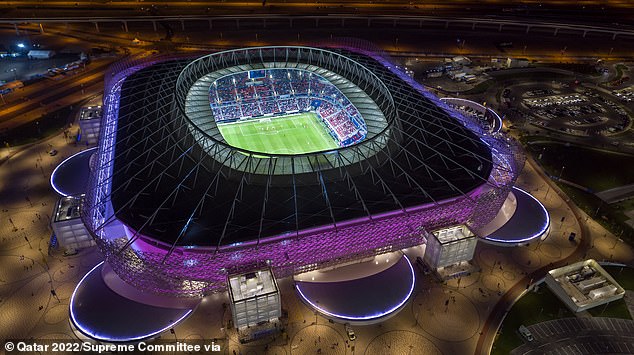 Every new pitch needed 50,000 litres of desalinated seawater a day during the summer

‘The playing surface wouldn’t hold together without the right grass seed because of the climate and conditions in Qatar,’ said David Graham from Aspire Turf, the company responsible.

Every new pitch needed 50,000 litres of desalinated seawater a day in the summer — more than enough to leave environmentalists choking about the excess.

Groundsmen triggered wintry conditions in September by blasting chilled air on to the pitches, making them durable enough to host the tournament in November and December.

‘When you have wear and tear, you want the grass to keep growing to recover,’ said Haitham Al Shareef, an experienced member of the Qatari team.

Peak temperatures are dropping at the moment, which is good for the players but not so much the groundskeepers who are aware that winter ryegrass can stop the pitches regenerating. 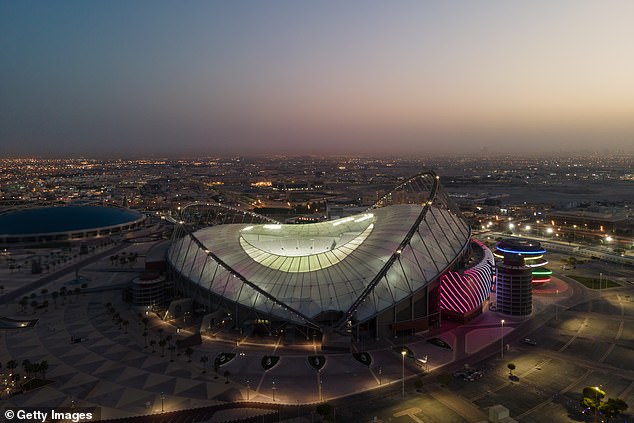 Chemical cocktails and an underground system to reduce moisture have been used to eradicate the risk of grass fungus — which would turn matches into farce.

However, with the whole Qatar World Cup costing an estimated £7billion — the most expensive in history — it’s no surprise organisers have a Plan B in case any of the pitches become unplayable.

At a farm to the north of the capital Doha, a huge field covering 40 full-size pitches is growing reserve grass.

If an SOS comes from the Khalifa International stadium, where England play their opening match against Iran on November 21 — or any of the other grounds — Qatar promise they can put down a new surface in double-quick time.

‘It can be harvested, moved and lay down ready for play in eight hours,’ said a confident project manager Mohamed Al Atwaan.

Qatar has been preparing for this for 15 years, well before they were officially confirmed as hosts. Seeding for the current pitches began three months ago.

The first test will come on November 20 when Qatar face Ecuador in the opening game.

Other than the pitches, this World Cup will be the first in which players and supporters can get the benefit of air conditioning. Even as they approach winter, temperatures could reach 30 degrees Celsius (86F) in some parts of the day.

Cooled air will be piped in through grills in the stand and nozzles on the pitch. The air is drawn back, re-cooled, filtered and pushed out again.

It is the brainchild of engineer Dr Saud Ghani who has been dubbed Dr Cool. He has based it on air conditioning in a car. ‘Only on a bigger scale,’ he quipped.