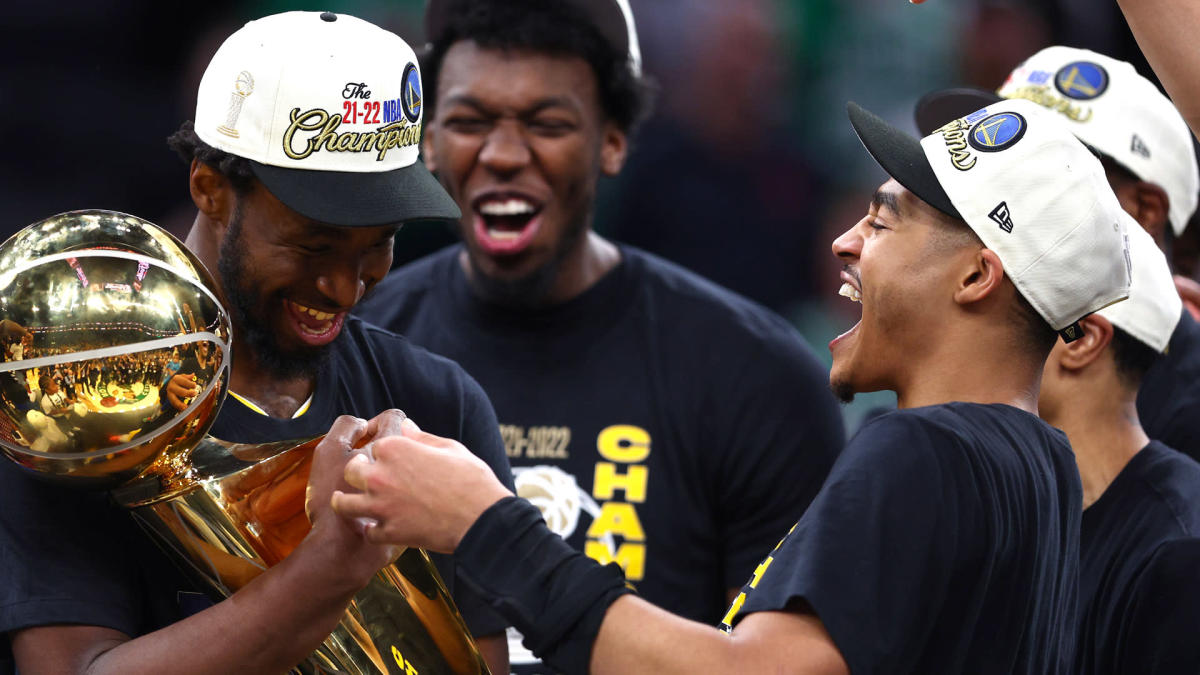 Steph Curry, while appearing on NBC Sports California’s broadcast of the Athletics-Houston Astros game on Wednesday as part of his Eat. Learn. Play. foundation, spoke for all of Dub Nation when he said, “If I’m still hoopin’, we always got another chance at a championship.”

It all starts and ends with Curry when it comes to the Warriors’ chances, followed by his Big Three running mates in Klay Thompson and Draymond Green. They’re the base and beginning to a handful of reasons why the Warriors’ 2022-23 roster, as its currently constructed, potentially has even more upside than their championship squad from last season.

Eleven isn’t just Thompson’s jersey number, draft pick slot and year he was selected by Golden State. The number also marks how many minutes the combination of Curry, Thompson and Green played together in the regular season.

Recovering from a torn Achilles, after already rehabbing a torn ACL, Thompson missed the first 38 games of the regular season. When he returned on Jan. 9, 2022, Green joined him on the court to start the game. But that was purely out of respect as the forward sustained his own injury — one that he thought was to his calf but really was to his back — during pregame warmups. He didn’t play again until March 14.

The next game, the head of the snake went down.

Curry played under 14 minutes against the Boston Celtics on March 16, before a loose ball and diving Marcus Smart resulted in a sprained left foot for the Warriors superstar. The Warriors lost by 22 points to the Celtics and Curry missed the final 12 games of the regular season — a span where the Warriors lost six of their first seven games without him before going on a five-game win streak heading into the playoffs.

Golden State was a historically great defense through the first 38 games of the season thanks to a healthy Green. Thompson won’t have to be integrated into the team halfway through the season and gets to have his first healthy offseason since going into the 2018-19 season. Curry just pulled off one of the best NBA Finals performances we’ve seen and was dominant throughout the playoffs.

Those three together, with more than 11 minutes, should spell trouble for the rest of the league and make all of San Francisco smile.

We can’t forget the losses from last season’s roster, though.

Payton is one of the most unique players in the game and a true difference maker defensively off the bench. Porter was called the “perfect Warrior” at times by Steve Kerr for how smart the veteran forward is. Bjelica gave them more size and could stretch the floor. A piece of the Warriors’ soul left with the absence of Toscano-Anderson, Lee strong moments as a shooter and Chiozza was praised for the work he did in the locker room and behind the scenes as a two-way player.

The gains are fewer in total players, though that doesn’t mean they can’t make a major impact.

The Warriors’ two biggest free agents were Payton and Kevon Looney. Of course the front office, coaching staff and players wanted both back. Payton was given an offer he couldn’t refuse, one the Warriors weren’t matching from the Portland Trail Blazers. What became clear is that Looney was priority No. 1, as he should be.

Looney’s breakout season included him playing all 82 regular-season games, earning MVP chants for his 22-rebound performance to send the Memphis Grizzlies packing and it became how irreplaceable and underrated Looney is. That’s why the Warriors gave him a three-year contract that can be worth up to $25.5 million. The Warriors’ biggest move outside of retaining their own was signing guard Donte DiVincenzo to a two-year, $9.3 million contract.

“Once I had the conversation with Steph and Draymond, everything kind of slowed down for me a little bit because I got away from the numbers, the dollar signs and everything,” DiVincenzo said on July 10. “I was more so focused on what is best for Donte and what is best for me going forward. With that culture and environment, it’s something that I want to be a part of and it’s something of who I am.

“I don’t have to change who I am. I can just totally fit in and become a Warrior.”

DiVincenzo already has two of the most important voices in the building on his side. He also now is fully healthy and feels like he never had ankle surgery, which he injured in the 2021 playoffs and lingered into last season. In that 2020-21 regular season, DiVincenzo’s career looked like it was about to take off.

He started all 66 games he appeared in for the Milwaukee Bucks that season, and set career highs in points (10.4), rebounds (5.8), assists (3.1) and 3-point percentage (37.9 percent). DiVincenzo is a strong perimeter defender. It also is unfair to expect him to make the same difference there that GP2 did. However, he’s a stronger offensive weapon than Payton, is four years younger, has been a champion in college and the pros, and like Payton, he’s a great athlete with next-level bounce.

Plus, there’s his contract. Not only did the Warriors save a ton by letting Payton and Porter go, DiVincenzo’s deal comes with a player option for the second season. The Warriors will be getting an extremely motivated DiVincenzo, one who has seen other careers take off in The Bay.

“I know Jordan Poole took a huge step forward in his career and you can see how much they care about that,” DiVincenzo said. “And then [Gary Payton II]. What Gary did last year. The same with [Otto Porter Jr.]. Looking at how those guys have helped other players, that’s what I think is best for me.”

JaMychal Green hasn’t officially been added to the group of Warriors gains yet. All indications point to him becoming a Warrior after a buyout from the Oklahoma City Thunder. It’s safe to say he essentially is a Porter replacement, and a more athletic one.

Both players stand 6-foot-8. Green is nearly 30 pounds heavier than Porter and still can play the Warriors’ dunker role at times. They have plenty of reasons to believe the previous version of Green, not the one who’s coming off a down year, will show up for them.

After all that, we still haven’t reached the youth revolution of James Wiseman (21 years old), Moses Moody (20 years old) and Jonathan Kuminga (19 years old). Moody and Kuminga contributed as rookies to a championship, will be given larger roles in Year 2 and have all the tools to take a sophomore leap. Rehab is over for Wiseman. He’s healthy, playing games and as a true 7-footer, he gives the Warriors a center combination with Looney of two players who bring two different skills sets.

Wiseman and the Warriors also are in full agreement of his role and how he can best help them in the now as his game grows and his star shines brighter over the years.

“Just playing within the system and not trying to do too much. I really don’t have to do as much. Just do the most important parts of my position and star in my role to the best of my ability,” Wiseman said to NBC Sports Bay Area on Dubs Talk in an interview one day before his Las Vegas Summer League debut.

“Rebounding, running the floor, blocking shots and protecting the rim. That’s really it.”

How about two other players, one who made his first All-Star team, and one who showed star potential?

Andrew Wiggins became the player evaluators always wanted him to be as a more efficient scorer and lockdown defender. That’s what made him an All-Star last season. Well, that and the K-pop army of Bam Bam fans. Then in the playoffs, something else clicked.

“The offensive rebounds, I was really just thirsty to score,” Wiggins said to Andre Iguodala on the Point Forward podcast. “We have a lot of options on our team, a lot of people that come in the game and can score the ball and make plays.”

“You gotta figure out different ways to get it, so I was like lemme get my feet wet, go in there and rebound the ball, especially when we played small in the Memphis series and I had to rebound,” Wiggins continued. “I’m into rebounding, like ‘this ain’t that hard,’ like I can rebound. From there, I just kept with it, it helps us win, it gives us more possessions and I’m like ‘I can do this, I’m never going to average four rebounds again.’ I look back now, like I don’t know how that was possible.”

If the Warriors get Playoff Wiggins throughout the regular season, one who might be playing for a max contract, watch out.

While Wiggins was expected to one day have this kind of impact, Poole was not. The former No. 28 overall draft pick was labeled a bust not too long ago. One season after playing a handful of G League games, Poole stepped in for an injured Thompson and gave the Warriors a new Splash Brother. Poole averaged 18.5 points per game, averaged more points after Klay’s return than when he missed the first 38 games and Poole grew up even more in the playoffs.

Beginning with a 30-point performance to open his playoff career, Poole scored at least 30 points twice in the postseason. He scored at least 20 points seven times and was made for the big stage. Whether his scoring averages increase or not next season, we have to expect him to continue to improve and be an even bigger part of the Warriors’ winning formula.

The Warriors have a top 11 of Curry, Thompson, Wiggins, D. Green, Looney, Poole, DiVincenzo, Moody, Kuminga, Wiseman and J. Green. Top draft picks Patrick Baldwin Jr. and Ryan Rollins were added for the future and should see a lot of time in Santa Cruz. Iguodala has a spot if he wants it. Sharpshooter Lester Quiñones signed a two-way contract after going undrafted, and Quinndary Weatherspoon is back on another two-way deal while competing for a spot on the 15-man roster. Other moves could be made, and players like Mac McClung will be fighting to earn a place with the defending champs during training camp.

Does all this guarantee another parade? Far from it at the end of July.

What it does mean, for now, is that the Warriors have all the pieces in place to have more upside on their roster when healthy than they did a season ago. And that’s a hell of a start.