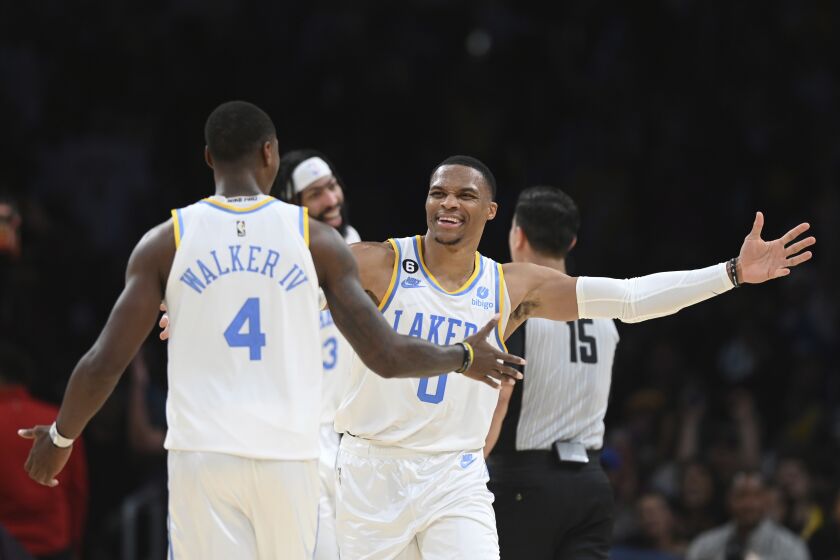 His voice was hoarse and the more a happy Lakers coach Darvin Ham spoke with the media the more difficult it become for him to speak in his usually deep and clear tones.

He had just won his first game as the coach of the Lakers, the 0-5 start a thing of the past, the Lakers finally getting a victory for their first-year coach and themselves.

As he stood up to walk out of the postgame interview, his 12-minute conversation with the media complete, Ham apologized.

“Sorry about my voice,” he said, smiling.

There really was no need for Ham to apologize.

The Lakers had become the last team in the NBA to win a game this season and it came against a Denver Nuggets team Ham broke into the league with as a player in 1996-97. Ham got his first coaching job in the NBA as an assistant with the Lakers in 2011.

All of those things went through his mind when Ham discussed the 121-110 victory.

“Laker Nation is strong. So, I just really wanted to give them something to really be loud and proud about,” Ham said. “So, hopefully we can string a few of these together and just keep growing and learning and growing and learning. And if we have success in the meantime, that’s always great. Because we got to taste the fruits of our labor tonight. …”

The losses took a toll on Ham, leaving him wondering what he could have done better to put the Lakers in position to win a game. He said he would go home “as a coach and you’re beating yourself up.”

“But at the end of the day, the support I’ve gotten from Bron [LeBron James], from Russ [Westbrook], from AD [Anthony Davis], Pat Bev [Beverley], all our guys,” Ham said, “From our phenomenal coaching staff, I love them to death. I couldn’t. … We couldn’t be as organized as we are without … I’m the face, I’m the leader but we have a phenomenal staff …”

Ham added: “It’s a beautiful thing to be a part of and I’m just happy that I was the one that was chosen. I’m thankful to God. It’s a beautiful time and I’m just looking forward to more. All the ups, all the downs, the good, bad, indifferent. We’re going to navigate it all because we’re strong. We’re family.”

Here are three takeaways from the Lakers’ first win of the season:

1) As Ham stood to give his postgame speech to the team in the locker room, he was interrupted by Beverley.

Before Ham knew it, his players were pouring buckets of water on him, celebrating with him, enjoying the moment with him.

They wanted to let Ham know how much he has been appreciated.

“Very nice little bath,” said Davis, who played through back pain that kept him out of the Minnesota game Friday night. “I mean, he’s been great for us. There’s not more we can ask for from a coach. And that’s kinda why we also feeling the way that we was feeling before tonight. We deserve it, he deserves it and it was good to get him his first win as a head coach. He made a speech and it was like, ‘All right coach, we don’t care what you’re saying,’ and then we drowned him with water.”

2) Westbrook had the basketball while behind the three-point line, with Denver’s Bruce Brown several feet away from the Lakers’ guard, daring him to shoot. As Westbrook hesitated, the crowd began to stir, encouraging him to take the shot.

Westbrook did, burying the three-pointer, looking over at the Nuggets’ bench while forming his hand into three fingers as he ran down the court in the third quarter.

Ham encouraged his team to keep shooting the three, believing that better days were ahead.

“I mean, listen, if you play the game the right way, as we’ve done so far in the season, we gave ourselves some really good looks because we’ve shared the ball,” said James, who was two-for-five shooting from three-point range. “And tonight, they went in for us. We trusted it. We had to penetrate and guys were kicking out, and guys were stepping into their shots. Just trust the work you put in.”

3) Another positive for the Lakers was taking care of the basketball.

They had just nine turnovers. James (three), Westbrook (three) and Davis (two) had the bulk of them, but they also made the right plays a majority of the time for their teammates.