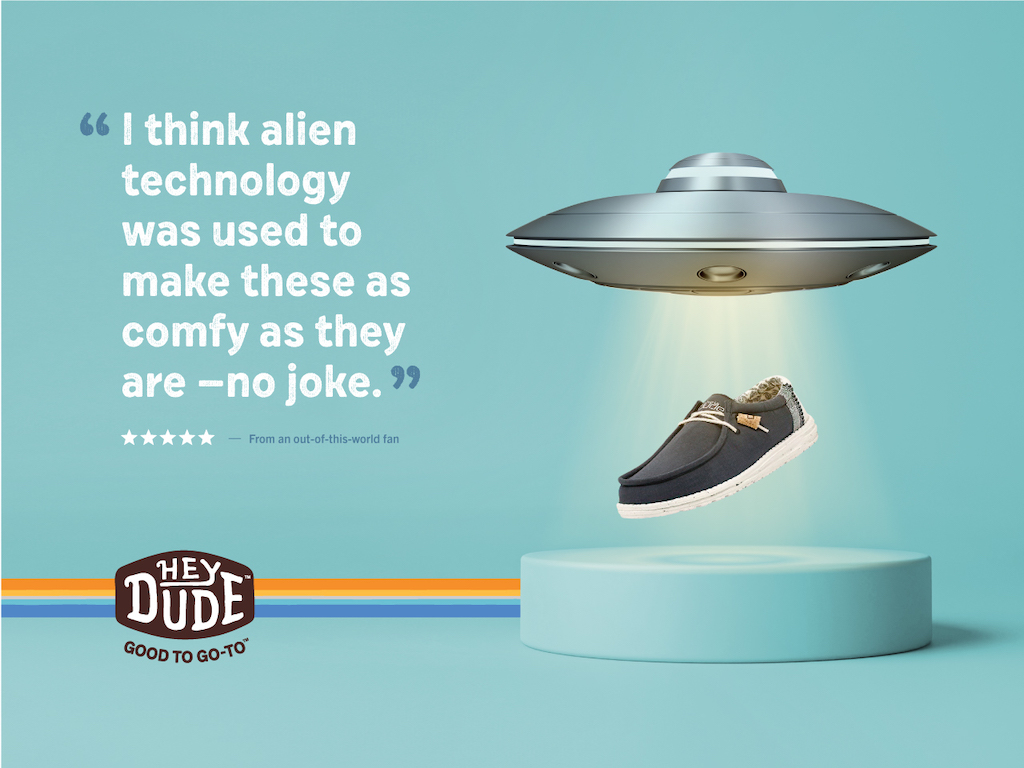 Hey Dude is rolling out a new marketing and brand identity campaign, its first major branding push since it was acquired by Crocs in February at a deal valued at $2.5 billion.

Today, the comfort-casual footwear brand launches a new identity centered around the message “Good to Go-To,” which aims to solidify the brand as the first choice for positive, colorful, supportive and light footwear. As part of the campaign, Hey Dude will roll out the new creative campaign, complete with messaging, a fresh color palette and a revamped logo across social channels and the brand’s website. At this time, there are currently no plans to roll out any new products.

“As we kick off this next chapter of Hey Dude, we challenged ourselves to discover the soul of the brand and to express that in ways that celebrate our unbelievable fans and the product they love,” wrote Hey Dude president Rick Blackshaw in an email interview with FN.

To come up with the concept for the new brand identity, Hey Dude utilized focus groups, online forums, and a consumer study to tune into its core consumers. As a result, the brand noticed that many people described its shoes as their “go-to” pairs for style as well as comfort.

“Our research was clear that Hey Dude fans are confident in themselves, are all-in on what matters most in life, and from a footwear perspective they value both style and function,” Blackshaw said.

Crocs has already laid out big plans for its first-ever acquired brand and said it expects Hey Dude see between $700 and $750 million in fiscal year 2022 and become $1 billion brand by 2024. In early May, Hey Dude raised its 2022 revenue targets to between $840 to $890 million, including the time prior to the closing of the deal. This goal complements Crocs’ previously announced plan to achieve $5 billion in sales by 2026.

While Crocs and Hey Dude will retain their own independent brand identities, both brands will focus on digital growth as well as differentiated retail partnerships. In March, FN reported that Hey Dude had eliminated certain contracted sales roles with a third party company in an effort to bring sales operations in-house. Crocs has notably shifted much of its attention from specialty retail channels to direct-to-consumer markets, though Hey Dude still plans to pursue partnerships with key independent retailers.

While Hey Dude considers itself a digital-first brand, Blackshaw said there is potential in the wholesale channel as well. The brand also plans to test retail stores in certain markets.

“Our goal of course is to bring Hey Dude shoes as close as possible to those who love us and want to make them their ‘go-to’s,’ which includes continuing to partner with great specialty retailers that brought us to the dance,” Blackshaw said.