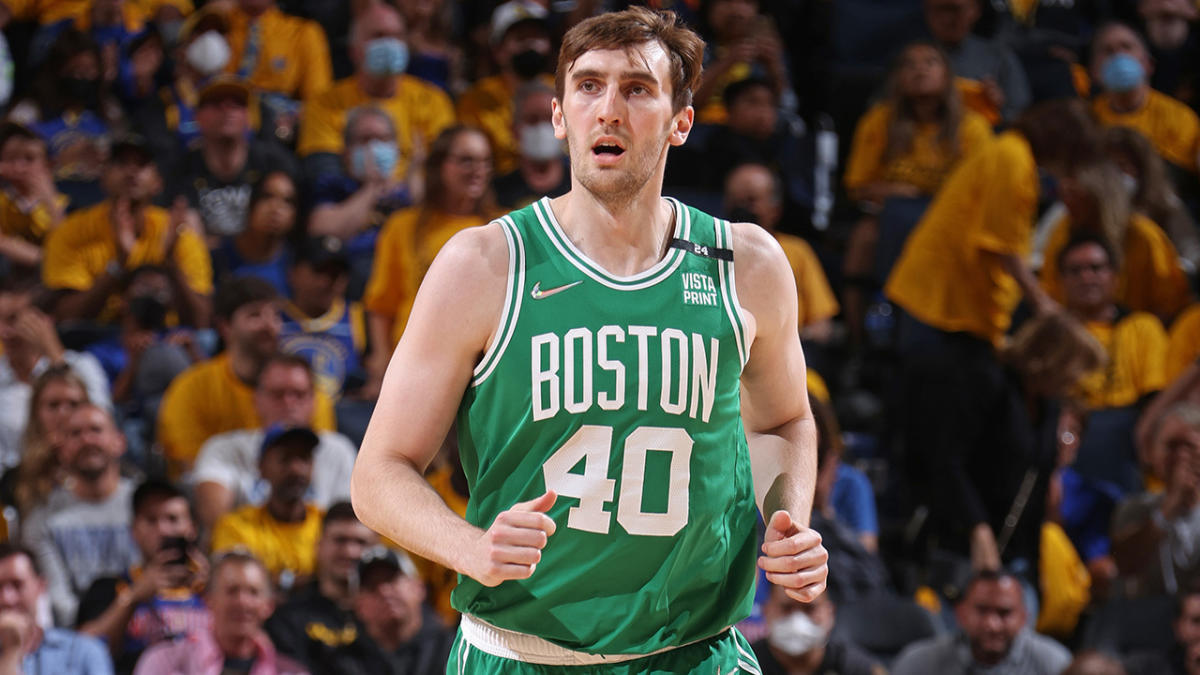 Forsberg: Why Luke Kornet could be a factor in Boston’s frontcourt originally appeared on NBC Sports Boston

That’s how long the Luke Kornet summer hype video ran. And that’s with a portion slowed down to accentuate the eyebrow-raising crossover that Kornet delivered during an otherwise unremarkable pickup game in a non-descript Tennessee gymnasium.

That’s the meat of the video. The 7-foot-2 Kornet shows off some slick ball-handling then delivers a gentleman’s reverse dunk. The clip could have easily drowned in the sea of glitzy NBA offseason workout videos that pollute social media throughout the month of August.

That’s how long it took from the time the clip got posted by a workout observer until it started making the rounds among Celtics Twitter. That’s when the video morphed from forgettable to something far grander.

After being posted by an account called @CelticsFiles, Boston president of basketball operations Brad Stevens liked the clip on Twitter. It’s the one and only “like” in Stevens’ 13 years of (very limited) social media usage via his verified @BCCoachStevens account.

And word quickly spread to Kornet.

“So I’m not on social media but I have been texted this from various people,” said Kornet, who is now acutely aware of his lone-like status. “I was playing pickup in Nashville and, I don’t know, it’s just kind of — that was just kind of a funny thing. It’s just all kind of humor and funny.”

Funny until you suggest to Kornet that, of all the videos that Stevens could have hit the heart button with a clumsy thumb, it was that video.

“I highly doubt it was a clumsy thumb,” said Kornet. “But it was also funny because I’m playing pickup and it’s not the most normal of positions I expect to have in a Celtics uniform.”

Kornet later suggested he was, “in his bag.” But he’s not expecting Stevens to lobby interim coach Joe Mazzulla to retool the offense with Kornet running point.

Was Stevens’ like truly an accident? Some mysteries might be better left unsolved. And it’s still a badge of honor for Kornet.

“I’m a little jealous. I thought me and Brad had a special relationship,” Marcus Smart joked when informed that none of his many hustle videos have ever gotten a like from Stevens. “But I think I liked Luke’s highlight video, too.”

And Smart is certain it was no accident either.

After all, the Celtics as a whole are high on what Kornet can contribute given his combination of size and skill.

“Oh man, Luke is very good. And he’s very skilled,” said Smart. “That’s one thing we love about Luke, how skilled he is. He can stretch the floor, but he can actually get down and play with his back to the basket. And, on the defensive end, he does a really good job of going vertical for us and being that type of presence that we’re missing.

“So it definitely was unfortunate for his injury to happen early in the preseason. But he’s been putting in the work and he’s been doing everything he can to get back on the court and now it’s just getting his confidence back and getting the feel for it. But he’s definitely, definitely a skillful guy and I think he can help us.”

Kornet got spotted with a green first-team jersey after Boston’s first training camp practice of the new season. He suffered an ankle injury soon after and didn’t play a single preseason minute.

The 27-year-old Kornet has played only 11 total minutes while making brief appearances in each of Boston’s last two games. His role should increase starting Friday night when the shorthanded Celtics host the Cleveland Cavaliers at TD Garden.

See also  No rest for the Lakers' defense, which went missing in action vs. Jazz

Even before the start of the season, Kornet said he was ready for whatever the team might throw at him, especially with starting center Robert Williams III sidelined for the first two months of the 2022-23 campaign.

“I feel like the place I tried to get to in my life and in my career is just accepting the role that you’re given and being ready for whatever it is,” said Kornet. “So I’m definitely excited and hoping that I can, honestly, just help our team be as good a team as possible. That’s kind of what my overarching theme and goal is, whether you’re called to the play 30 minutes, or you’re not called to play any minutes, or anywhere in between.”

So what haven’t we seen so far from the Luke Kornet experience?

“The Luke Kornet experience, I think that’s quite the statement,” Kornet said with a laugh. “I think when it comes to being on the floor, I just really want to play winning basketball. I want to play very connected basketball.”

Now, that’s a statement that Stevens would most certainly like.