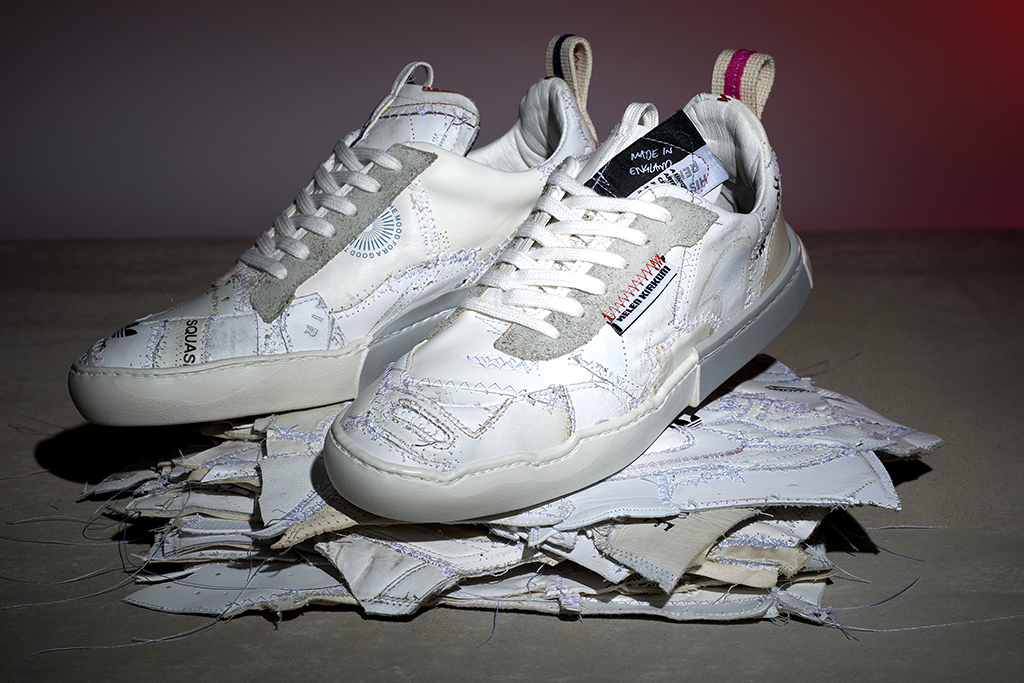 Helen Kirkum Studio has revealed its first ready-to-wear sneaker during its London Fashion Week presentation at The Old Selfridges Hotel on Friday.

Known for her made-to-order service and collaborations, Kirkum’s new sneaker is the first style that will have a more prominent launch. Called the “Palimpsest,” the sneaker is made in England predominantly from repurposed and recycled materials, which Kirkum is known for, sourced from within the EU and the UK.

Taking inspiration from Kirkum’s signature split-sole design, the new sneaker, which retails for £590 (approximately $675), features mismatched fore and rear sole components. As with all Kirkum’s other creations, details are key. The sneaker features a corn leather lining, insoles made from 98% recycled content, and heel tabs created from single multicolored laces collected during the material hunting process.

What’s more, the tongue label has the stitch lines designed into the graphic and the stitching in red in reference to the red pen used by the factory to correct errors. The phrases “Made in England” and “An artefact crafted from single shoes” appear on the tongue label.

In an interview with FN before her London Fashion Week presentation, Kirkum said that this launch has been “a long time coming” and that she’s wanted to launch a ready-to-wear sneaker for a while now. “Finally, it’s coming to fruition,” Kirkum told FN. “And I think for me, that’s just been a case of like growing, finding my feet within the industry and building the business. And now getting to a point where I feel established enough, I feel like I’ve actually got this system of using old sneakers, I’ve managed to find a tangible system that can work. I’ve managed to scale, I’ve managed to get some amazing partners on board. And now is the time to launch this shoe.”

According to Kirkum, the shoes are made by the Sheffield-based footwear manufacturer Goral with uppers created from materials repurposed from discarded single sneakers sourced from Traid Warehouse, a charity and longstanding partner of the studio that works to tackle the social and environmental problems caused by making, consuming, and wasting clothes.

The footwear designer noted that the uppers are stitched by Love Welcomes, an organization that provides meaningful, compensated work to refugee women.

“My goal has always been to create an easy-to-wear, everyday sneaker with a rich material story behind it,” said Kirkum. “To create something that we recognize but are not used to seeing. The stories of the materials are deeply ingrained within each pair, with layers of memories and textures. As always with our studio, I wanted to create the feeling of bespokeness, so each one is still unique.”

Kirkum noted that a limited number of pairs will be available for pre-order via the brand’s newsletter, The Sneak Peek, from September 16-25. A wider release will follow in late November on Helenkirkum.com and at a select retail partner.

Since then, she has gone on to collaborate with some of the biggest names in footwear including Adidas, Reebok, Melissa, Timberland, Nike, Yeezy and more.