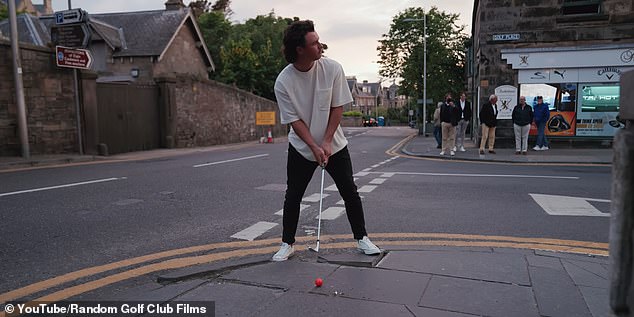 A viral video featuring a young Aussie golfer taking an illegal shot from a famous Scottish pub and landing it on the 18th green at St Andrews has led to him qualifying for both the US Masters and British Open.

Harrison Crowe, 21, gained fans around the world this year after pulling off the stunning shot without permission or permits at the home of golf.

Now he has stamped his ticket to the big time after winning the Asia-Pacific Amateur Championship on Sunday. 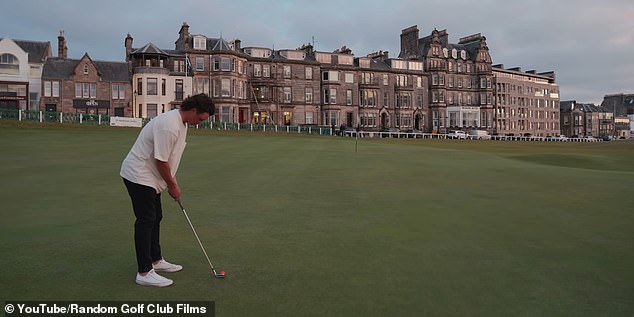 His even-par final round of 72 at the Amata Spring Country Club in Thailand to seal the title means he will get to play The Open at St Andrews for real in 2023.

‘It means so much,’ Crowe said.

‘I came out here this week with something to prove and I’m just really proud of myself the way I handled myself on and off the course.’

But why did the young up-and-comer decide to take the famous shot from the pub in Scotland in the first place?

There is a classic urban legend that four-time major winner Ernie Els – who made a career out of hitting clutch shots – landed a ball on the 18th green at St Andrews from the footpath outside the Dunvegan.

Content creator Erik Anders Lang from Random Golf Club Films decided to find someone who could replicate the alleged feat, and up stepped a slightly inebriated and very enthusiastic Crowe.

‘I heard this crazy story about a golfer who hit a shot from the Dunvegan, which is a bar about a nine iron away from the 18th green,’ Lang said.

‘I didn’t know who it was, tonight I found out it was Ernie Els.

‘Filled with excitement, I looked around inside the Dunvegan, the famous 19th hole of the oldest and most amazing golf course in the world, and I said, “Who thinks they can hit the 18th green from the corner?”.

‘Young Harrison came up to me and said, “I’m from Australia and I can do it”.’

For the first attempt, a tee was driven into a crack in the footpath and Crowe’s drinking buddy gave him some sage advice.

That first attempt sailed over the nearby buildings, but missed the green to the right, so Crowe had to recalibrate.

‘All right, film this,’ he said as he ditched the tee and rested the ball directly on the footpath.

This time he used the left chimney as his reference point and the ball sailed over the buildings and landed on the green.

The Aussie and his friend went straight back to their drinks after the stunt – and now Crowe will be hoping his next drink at the pub comes as he celebrates a great round at the world’s most prestigious tournament.