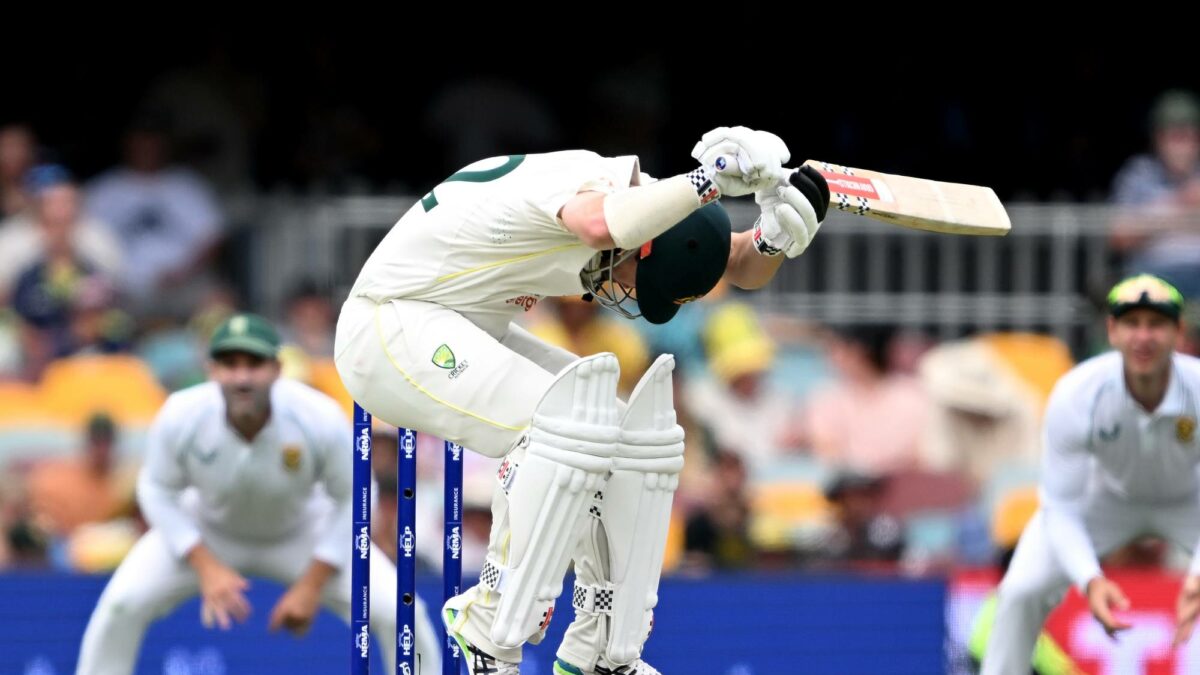 The Gabba pitch wasn’t poor, it was a goat track but according to the ICC it was just “below average”.

It’s a tough job being a curator and the weather can play havoc with the best-laid plans but there was no excuse for the seaming greentop which was dished up for the first Test between Australia and South Africa that was over after 34 wickets fell inside two days.

Today was supposed to be day five.

On a decent wicket, if both teams had played to their potential, cricket fans should be heading into a thrilling day five between the teams ranked one and two on the World Test Championship standings.

And what do the Gabba officials get as a punishment for their wicket pitch of the north? One demerit point on the folder that sits in the ICC’s bottom drawer. 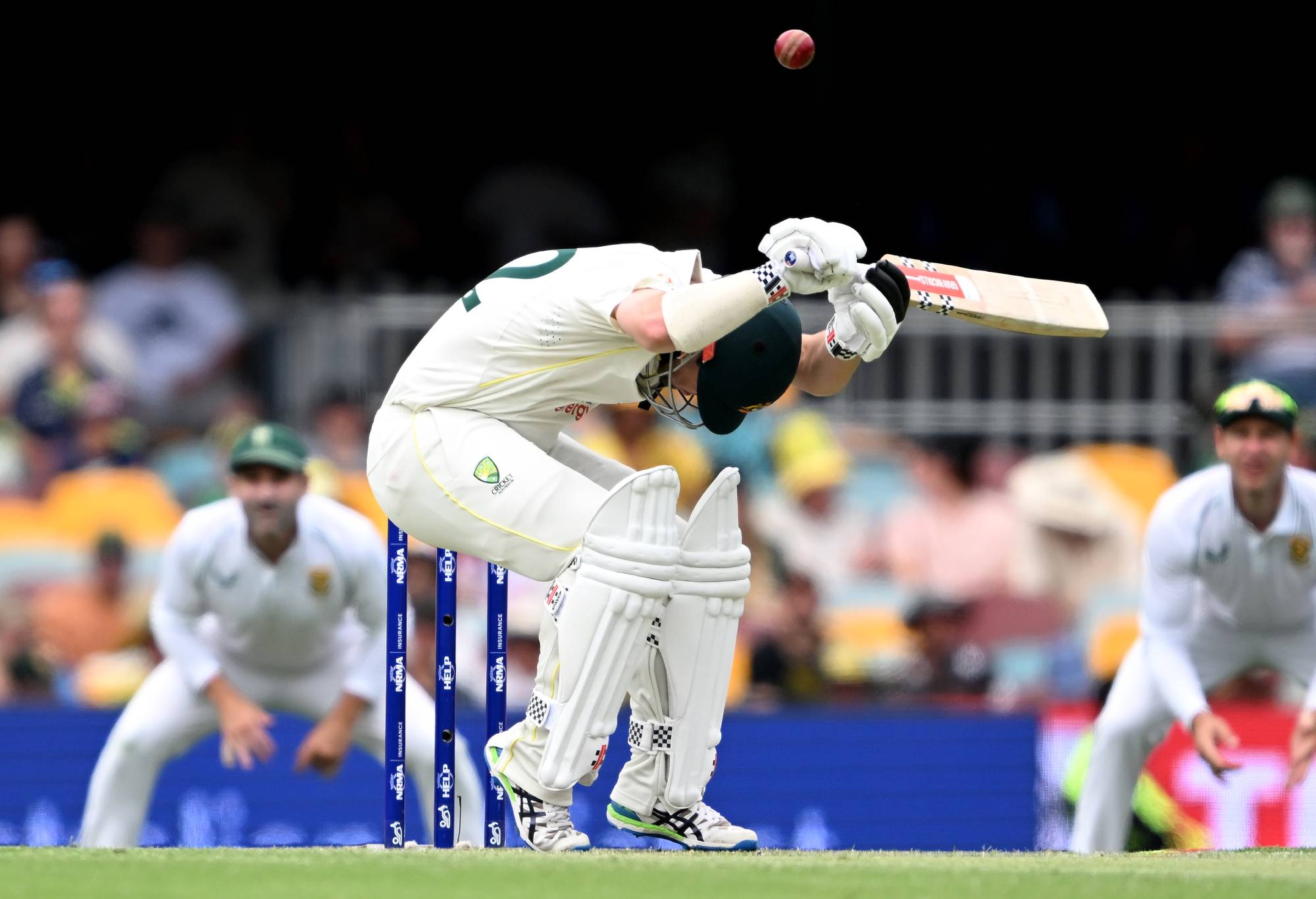 Travis Head ducks under a bouncer at the Gabba. (Photo by Bradley Kanaris/Getty Images)

If they turf out four more of these monstrosities over the next five years they will then be banned for a year from hosting international cricket.

Surely this pitch deserved the lowest rating of “poor”. You’d hate to see anything worse dished up than that one, then Dean Elgar would have got his wish and the umpires would have had no choice but to abandon the match.

ICC match referee Richie Richardson in his report said: “I found the pitch to be ‘below average’ as per the ICC guidelines since it was not an even contest between bat and ball.

“Overall, the Gabba pitch for this Test match was too much in favour of the bowlers. There was extra bounce and occasional excessive seam movement.

“The odd delivery also kept low on the second day, making it very difficult for batters to build partnerships.”

The MCG copped a poor rating in 2017 after the Boxing Day Ashes Test was ruined by a turgid strip which was low, slow and lacking any life. Just 24 wickets fell on that occasion over five days as the match petered out into a mind-numbing draw.

Not surprisingly, Elgar as the losing captain, was furious about the Gabba pitch,

“I don’t think it was a very good Test wicket,” Elgar said. “The nature of the way it started to play with some seriously steep bounce with the old ball. You’re kind of on a hiding to nothing as a batting group. You’ve got to ask yourself if that’s a good advertisement for this format.”

Not a good advertisement at all. The broadcasters certainly didn’t get bang for their advertising buck with only two of the five days going ahead, the first Test Australia since 1931 to do so.

And just as predictable, Pat Cummins and the Australian camp thought the wicket wasn’t that bad after winning the toss, making the easy decision to bowl and ripping through the brittle Proteas batting line-up in both innings.

Assistant coach Daniel Vettori added his voice to the debate on Tuesday by telling reporters for “occasional Test matches it is not the worst thing”. “I think I have seen worse,” he said. “It was just really tough conditions and once in a while as a bowling group you don’t mind that.”

There’s a difference between batters facing tricky pitches and the world’s best willow wielders being at the mercy of the surface.

Bouncers were flying not only over the batters but over the keeper’s high-leaping attempts. Usman Khawaja realised early in his second innings on day two that if he stayed still he was a sitting duck so he tried to get out of the way and attack as his form of defence. But that didn’t work either as he slashed a cut straight to the gully after backing away to leg.

Travis Head deservedly won player of the match for his 92 in the first dig and you could argue that he was able to make runs by attacking the bowling. That is true, the in-form left-hander was brilliant in his counter-attack but that is pretty much how he bats on any surface. In the second innings he lasted just one ball after a Kagiso Rabada bouncer reared up at him.

The ball that ducked in from Anrich Nortje to knock over Steve Smith in the Australian first innings was unplayable.

This is Smith we’re talking about, who averages 60 in Test cricket.

He’s come forward, played a defensive shot – nothing outlandish – to a ball on a good length that has jagged back and clipped his off bail.

The look on his face after the delivery says it all. He’s bemused because there was not much more he could have done to prevent the end of his innings on 36. If you want to be pedantic, there was the slightest gap between bat and pad as he went forward but unless his New Balance blade was glued to his front foot, he wasn’t keeping that vicious off-cutter out.

For Smith, it’s not the end of the world in terms of his career when his knock is cut short like that. But for the likes of David Warner, who is fighting to save his Test future amid his worst form slump, and pretty much every Proteas batter except maybe Elgar, the pitch was detrimental to their career prospects.

Virender Sehwag won’t be happy that this pitch was not ranked on the lowest tier. The outspoken former Indian opening batter took to Twitter the other day to tell his 23 million-plus followers that he was calling out what he perceived to be double standards.

“142 overs and not even lasting 2 days and they have the audacity to lecture on what kind of pitches are needed. Had it happened in India, it would have been labelled end of test cricket, ruining test cricket and what not. The Hypocrisy is mind-boggling.”

This kind of wicket should not happen with all the technology and gadgetry available to curators.

And for the ICC to yet again come down with the feather touch with its sanctions means this kind of wicket could happen again.

There was nothing in the way of pitch doctoring going on in this instance but what’s to stop a curator in the future of tailoring a wicket to be as poor as possible to help the home side? Sanctions like these ones certainly act as no deterrent.