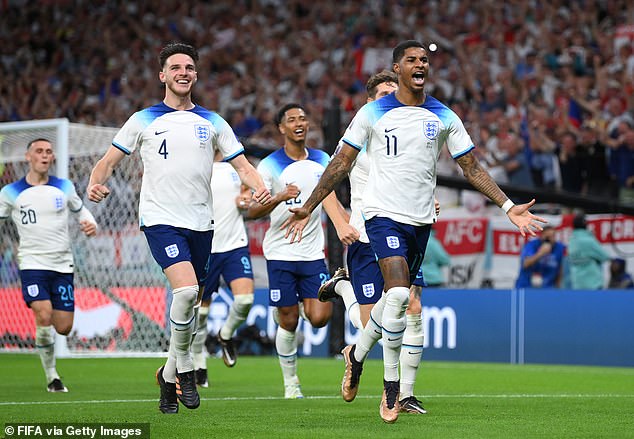 Gary Neville believes finding the right balance between on and off-field commitments has allowed Marcus Rashford to flourish at the World Cup.

Rashford received widespread praise for raising awareness about the need for free school meals in 2020, and has continued to play an influential role ever since.

However, his performances on the football pitch tailed off last season, and after being left out of Gareth Southgate’s squad for over 12 months it appeared that he may miss out on the World Cup. 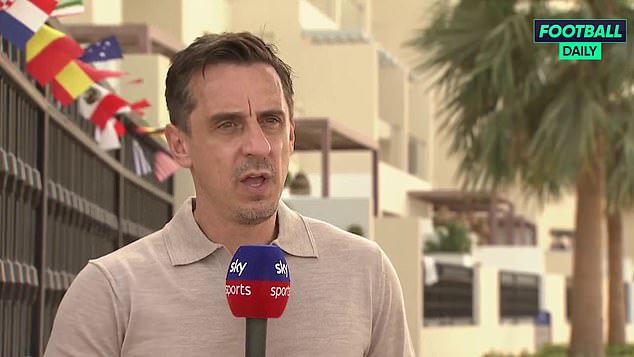 He has returned to form, though, and scored a brace against Wales on Tuesday to take his goal tally for the tournament to three. Neville has compared Rashford to another high-profile player that he played with, David Beckham, and he thinks the Manchester United forward is starting to benefit from ‘simplifying his life’.

‘He’s back on it,’ Neville said of Rashford on Sky Sports in the aftermath of England’s 3-0 win over Wales.

‘That period of his life through lockdown where he achieved so much off the pitch… and then it’s hard. I played with David Beckham who had that off-the-field focus at times, whether it be the early parts of his career when he started going out with Victoria and he had to cope with that off-the-pitch scrutiny all the time.

‘And Marcus had that for a couple of years, whereby that would have just brought a pressure. I don’t like using the word “distraction” because that suggests that it was a negative and actually what he was doing was incredibly positive. But it does in some ways come away from the focus of football, because if your mind is being taken away to something else, you’re not focusing on your control, your passing. You think you are, but you’re not.

‘We’ve all been there in our lives where we’ve had a personal issue or something that takes our focus away, and your football’s just not quite the same. Marcus Rashford has got back to what he does.

‘I think he’s simplified his life. He’s still achieving great things off the pitch but in a more measured manner. It doesn’t seem as full-on. And then I think on the pitch, we’re now starting to see Marcus Rashford.’ 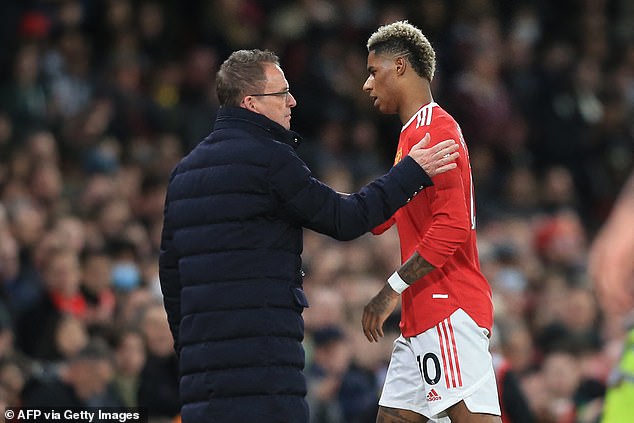 After struggling under Ole Gunnar Solskjaer and Ralf Rangnick last term, there were some calls for Manchester United to look to move Rashford on in the summer.

Neville feels that would have been a mistake, and he is glad that United stood by the striker who is now delivering for club and country.

‘Yeah, he can improve, he will continue to improve. But it’s great to see him in an England shirt. I worried a little bit in the first half when he missed that chance and I wondered whether that would play on his mind, but I was delighted that he got the two goals in the second half.’ 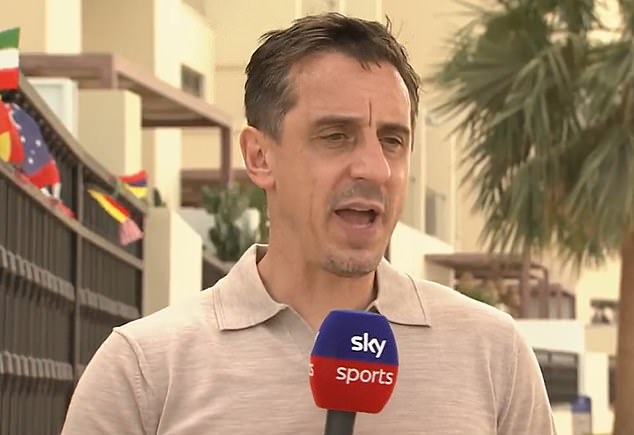 Southgate opted to rotate his attackers on Tuesday with England all but guaranteed a place in the last-16 heading into the match.

It appeared before the match that Raheem Sterling and Bukayo Saka were in pole position to come back into the side for the knockout stages having started the opening two games, but Neville now thinks Southgate cannot afford to leave Rashford on the bench against Senegal.

‘I think he’s pushed himself into the position… he’s the one I think will start on Sunday,’ Neville said.

‘He’s the one I think is guaranteed to start in that wide position.’