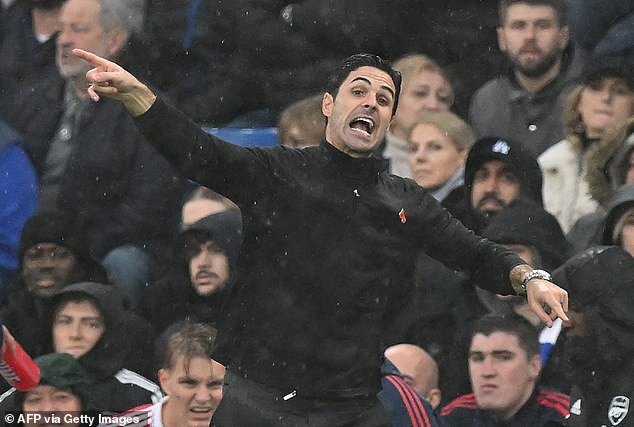 Gary Neville said he will continue to question Arsenal’s title credentials because Mikel Arteta’s men have failed to prove themselves at the business end of the season.

The Gunners went back top of the Premier League after their 1-0 win at Chelsea on Sunday afternoon, and have been fighting toe-to-toe with Manchester City.

But Neville has insisted the team fell short at the end of last season, so while their current form must be praised, he’s not optimistic about their title chances as it gets to the nitty-gritty conclusion of this campaign.

Neville told the Sky Sports Premier League podcast: ‘We have to question them. Arsenal fans come at me every single week, because I will continue to question them until I don’t see a moment like I did here [at Tottenham] last season, and they get through those moments, and they finish second, or they finish third, or top, which would be out of this world.

‘Because they haven’t proven it yet. It’s like a boxer that hasn’t won a world title, or a national title. You have to question them. But what you cannot question is, that was a really, really good performance.’

The 47-year-old added that he is interested in the way that Arsenal used long throws at Stamford Bridge to overcome the Blues.

‘Arteta is obviously a coach that likes progressive football, he likes the idea of playing through the thirds, his team play great football, but the idea that he’s also willing to put a long throw in against Chelsea, I like it,’ Neville said. 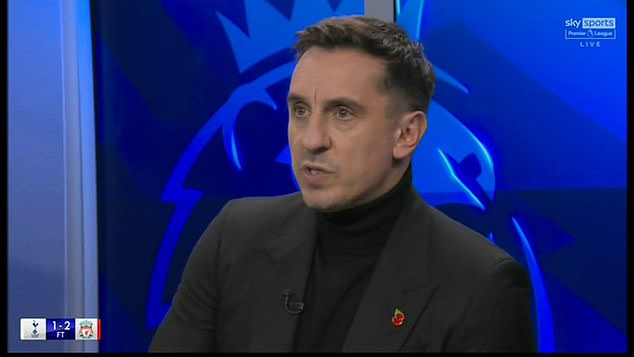 ‘I think that teams that demonstrate weakness, they lose away from home, they concede goals on set pieces, they don’t come from behind – they’re the patterns of a team that haven’t got any resilience or robustness or toughness.’

He continued to say the World Cup break would be a challenge for all clubs, creating a unique season where players may not return in the same condition that they did in the first part of the campaign.

Neville said: ‘The reason there has to be a question is because we don’t know what’s going to happen on the other side. The big part of the season, where it really matters, is yet to come,

‘Arsenal are fantastic, a real value team, playing great football. I love watching their front players – I love Jesus, I love Saka, I love Martinelli, absolutely fantastic, and Odegaard is class, but I wanna see it over 38 games.

‘We’ve seen over the last few years – this Arsenal group of players have found it more difficult in the last part of season. It’s not overly negative. Let’s see what happens in 20 games’ time. 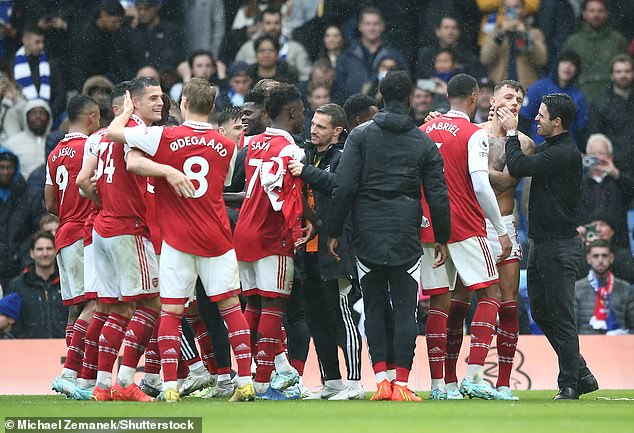 Arteta’s side moved back top with the win at Stamford Bridge, and Neville praised their play

‘In this moment, I feel like they are bang on to finish top four. I feel they’ll fall behind [Manchester] City by some distance towards the end, because City are the top team. That wouldn’t be any shame. If Arsenal finish second, that would be a magnificent achievement for Mikel Arteta.

‘They play amazing football, they look like real deal and look like they’re going to get closer and get better – they’re young, they’ve got a good age, they’ve got a great spirit. Arsenal fans are loving their team again.

‘They’ve got to show us as the season keeps on into January, February. That’s when the interesting times will start to happen. I’m getting more confident by the week for them. But I don’t think we’re wrong to question that they haven’t proven they can deal with the business end of the season.’

Arsenal have a Carabao Cup match against Brighton before playing a league game against Wolves in their final fixture before the six-week World Cup break.