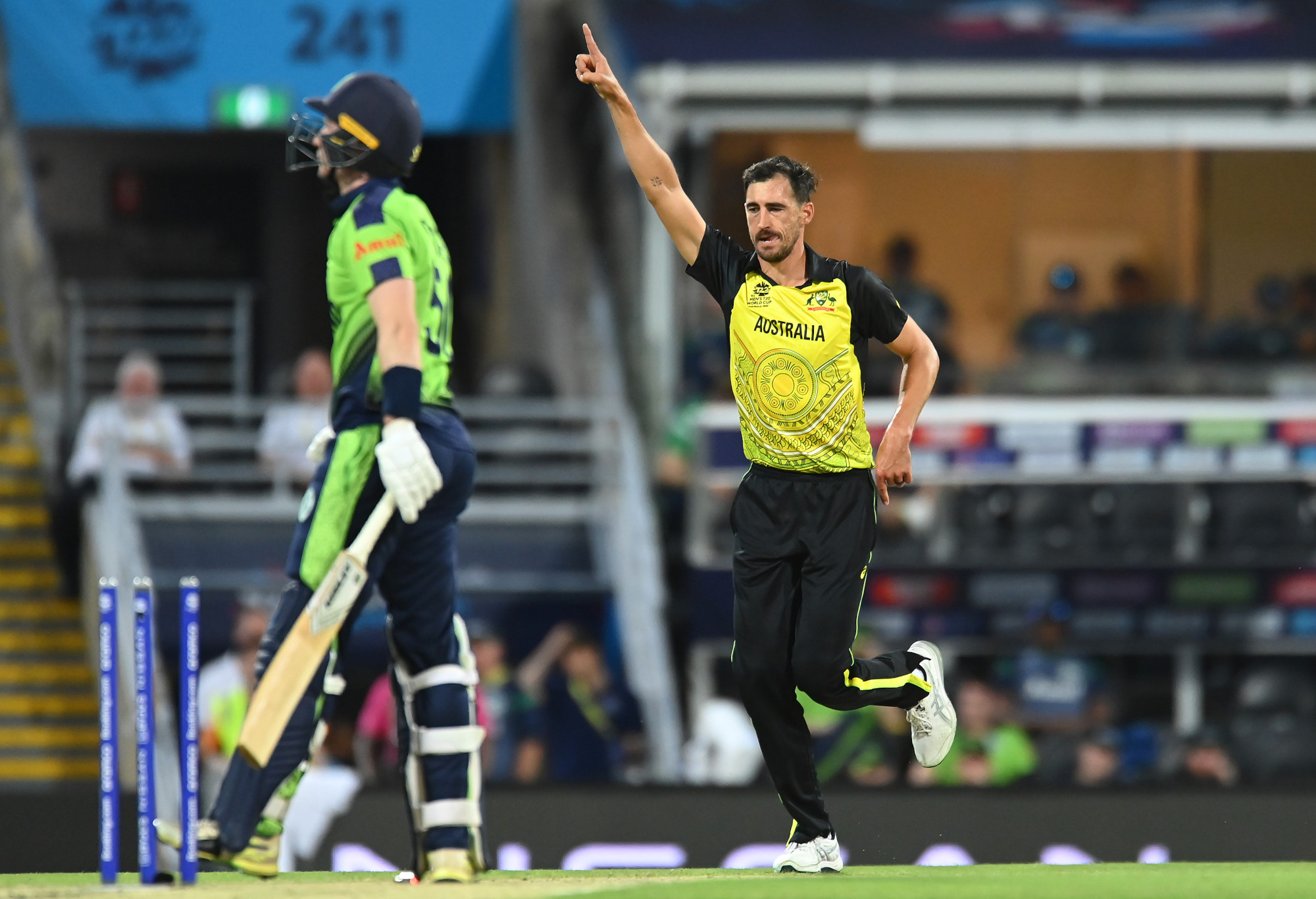 Just when Australia’s batting line-up really hit their straps, it looks like three of their big guns may not play again in the T20 World Cup.

Australia can cover the absence of Aaron Finch, Tim David and Marcus Stoinis if they’re ruled out of Friday’s final group game against Afghanistan in Adelaide but it’ll be a tough ask if they make the semis and have to line up without them.

But whether they’re in or out and who replaces them will be pointless debates if England beat New Zealand at the Gabba on Tuesday night.

The Aussies didn’t do enough to fix their net run rate in Monday night’s win over Ireland in Brisbane.

When they had the Irish struggling big time at 5-25 after Australia had put 179 on the board, it looked like we’d make a sizeable dent on that front but Lorcan Tucker was superb with his 71 not out from 48 rocks.

But in saying that, I don’t think Australia executed their bowling well enough.

I still can’t see the logic behind using Mitchell Starc as the second change bowler. He needs to have the new pill, swinging it around from ball one.

And Pat Cummins is bowling too many balls on a length that batters are finding easy to swat away.

The bowling is now becoming a concern just when the batting is coming good.

It was great to see Finchy find some form with his 63 off 44 and the rest of the batters followed on from that – all of them striking at a really good clip, going hard at the ball from the start of their innings with full knowledge that if they got out, the next guy in could take up the task. 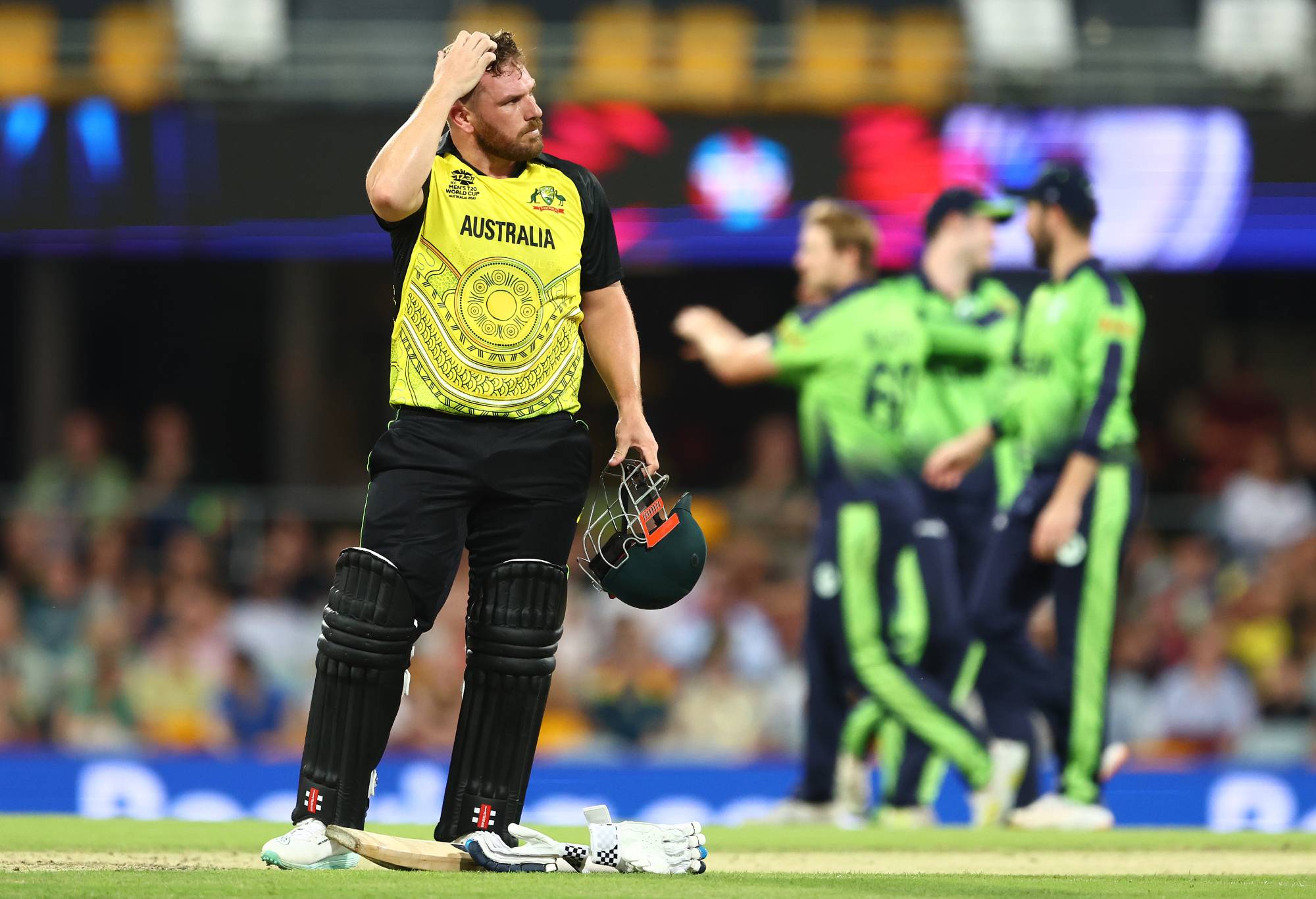 I’m not worried about David Warner now having a few low scores at the top of the order, he’ll come good.

If Finch, Stoinis and David are all out for the game in Adelaide, there’s only four other squad members and one of them is a fast bowler in Kane Richardson so they’ll have to bring in Steve Smith, Cameron Green and Ashton Agar.

It’ll be a pretty all-rounder heavy line-up but they’ve got no choice.

I’d slot Green straight in at opener. He did really well when he was given a chance there in India even though he came back to earth a bit when he was back home for the warm-up games before this tournament.

Mitch Marsh should stay at first drop and then you’d have Smith at four, Glenn Maxwell sliding back a spot and then you’d bring Matthew Wade up to six and Agar, who can hit a long ball, would be next in at seven before the four front-line bowlers.

It won’t be a problem against Afghanistan but they’d be looking a specialist batter or two short if they made it to the semis mid next week and those three are injured.

Looking at the forecast for Brisbane it looks good for Australia with rain and thunderstorms predicted late on Tuesday.

If that happens, England will only get one point and be stuck behind the Aussies hoping they lose to Afghanistan so they can get a spot in the last four with a win over Sri Lanka on Saturday in Sydney.

One more thing I’d like to mention from Monday night’s game is how well Ireland have done to build a competitive team.

Tucker was brilliant, their openers Paul Stirling and Andrew Balbirnie missed out but they are solid performers, George Dockrell’s a gun with his left-arm spinners and they’ve got some clever bowlers.

They did well to qualify for the Super 12 stage but they thoroughly deserve their spot and in the past they probably would have been rolled for a paltry score after losing five top-order wickets cheaply, but they showed plenty of resilience and they’ve got some skilful players so they future looks bright for this latest generation of Irish cricketers.