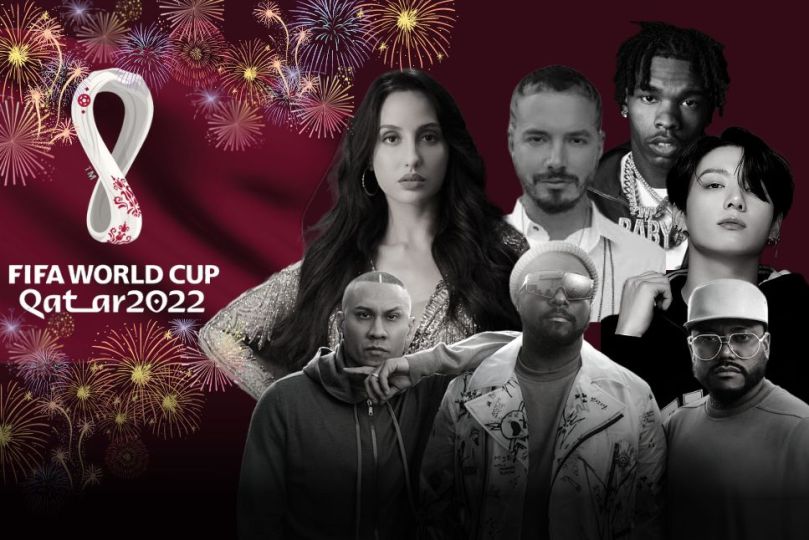 FIFA WC Opening Ceremony LIVE: Qatar World Cup 2022: There are only a few days left until the 2022 World Cup. Fans are…

FIFA WC Opening Ceremony LIVE: Qatar World Cup 2022: There are only a few days left until the 2022 World Cup. Fans are already arriving to support their teams, which shows how excited they are. For the first time ever in the northern hemisphere, the 22nd edition of football’s biggest game will occur during the winter. Previous World Cup opening ceremonies, along with the amazing goals, one-of-a-kind innovative moments, and all the drama in between, caught the public’s attention—and occasionally criticism. From Jungkook to Nora Fatehi, lets take a look at top 5 performances to watch out for. Watch FIFA WC LIVE Streaming with Jio Cinemas & Follow FIFA World Cup 2022 LIVE updates with InsideSport.IN

The performers for the main event’s opening ceremony has not been announced. However, according to reports, some of the potential performers are:

The ceremony, which was originally scheduled for November 21, was shifted ahead along with the first game. To retain the tradition of having the hosts or reigning champions play in the opening game, this was done.

The event will take place in Al Khor’s 60,000-seat Al Bayt Stadium. The stadium served as one of the World Cup venues when it opened in November 2021. The Al Bayt Stadium will host six group matches, a round-of-16 game, and a semifinal during this competition.

JungKook, the South Korean pop sensation and part of the well-known boy band BTS, will perform during the FIFA World Cup 2022 opening ceremony.  Jung Kook visited Qatar for a brief period of time in 2017. It caused speculation about his potential attendance at the opening ceremony to heat up. At that point, the Twitter hashtag #WelcomeToQatarJungkook was starting to gain popularity.

[K-media] #Jungkook will stand on the stage at the opening ceremony of the 2022 FIFA World Cup in Qatar.

According to FIFA, 7-8 artists including Jungkook will be on the stage for the opening ceremony.

The opening ceremony will be held on the 21st at 1AM KST pic.twitter.com/c4iSrh6DiS

In the line-up, the American musical group Black Eyed Peas is also set to perform. The American band had also performed previously in the 2010 edition of the tournament. Later this weekend, the award-winning band will take over the official F1 Tracks and prepare a thrilling soundtrack for the season finale in Abu Dhabi.The Black Eyed Peas’ success in the late 2000s was primarily due to Fergie’s contribution as lead vocalist. The Black Eyed Peas just released their ninth studio album, Elevation, which aims to be a simple elevation of Translation.

However, Nora Fatehi makes tops the list with the most awaited performance. According to reports, Bollywood actress Nora Fatehi will perform during the World Cup opening ceremony. Alongside celebrities like Nicky Minaj, she had already starred in the video for “Light the World,” the official FIFA anthem for this year. Nora , who will be representing India on an international stage, is scheduled to perform in Hindi, where the anthem “Light the sky” has already been recorded by Moroccan singer RedOne, who has previously worked with Brazilian artist Shakira on the songs “La la la” and “Waka Waka.”

Colombia singer J Balvin is also set to perform on the same day. Balvin is a well-known reggaeton singer and businessman who has established a reputation as one of the most successful Latin performers of all time. By receiving prizes at the Latin Grammy Awards, American Music Awards, and Billboard Music Awards, Balvin has torn down boundaries across cultures in music. Although Balvin hasn’t performed at a World Cup, he did this season’s NFL kickoff.

Finally Lil Baby is set to grace the line up as well. The world cup 2022 song, “The World Is Yours To Take,” was also produced by American rapper, singer, and composer Lil Baby. The song also included many of the finest football players, such as Messi, Neymar Jr., and Raheem Sterling. FIFA has now officially announced that Lil Baby will perform at the 2022 World Cup Opening Ceremony and shake the stage with his vocals and musical instruments.

Date: November 20, 2022 – before the opening clash between hosts Qatar versus Ecuador.

FIFA World Cup Opening Ceremony: How to watch for free?

The opening ceremony of the 2022 World Cup will be broadcast on television and online in various locations throughout the world, drawing a sizable worldwide audience. In India, it will be live-streamed on the Jio cinemas app for free. Live broadcast will be available on the Sports 18 channel.