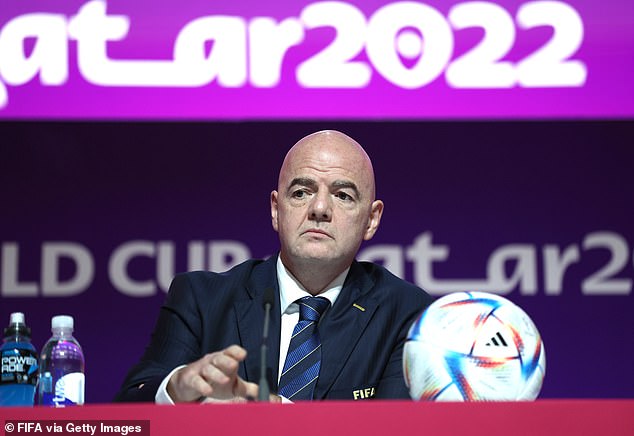 FIFA president Gianni Infantino hit out at criticism of Qatar from Europe on the eve of the World Cup.

The game’s global governing body has been attacked for its decision to take the finals to Qatar, where the treatment of migrant workers and the rights of LGBTQ+ people have been in the spotlight.

Ahead of the opening game of the tournament on Sunday, Infantino said: ‘We have told many, many lessons from some Europeans, from the western world.

‘I think for what we Europeans have been doing the last 3,000 years we should be apologising for next 3,000 years before starting to give moral lessons to people.’

‘Of course I am not Qatari, I am not an Arab, I am not African, I am not gay, I am not disabled. But I feel like it, because I know what it means to be discriminated, to be bullied, as a foreigner in a foreign country. As a child I was bullied – because I had red hair and freckles, plus I was Italian so imagine.

‘What do you do then? You try to engage, make friends. Don’t start accusing, fighting, insulting, you start engaging. And this is what we should be doing.’

In a remarkable hour-long monologue at his final pre-tournament press conference in Doha, Infantino made a number of statements that caused raised eye brows and sharp intakes of breath inside the auditorium.

Infantino appeared to suggest that Europe should ‘do as Qatar’ did in letting in migrant workers.

‘If Europe would really care about the destiny of these young people,’ Infantino said in reference to the migrant workers. ‘Europe could do as Qatar did, create some legal channels, where at least a number, a percentage of these workers could come.’

‘Lower revenues … but give them some hope, give them some future. This means we shouldn’t point to what doesn’t work, here in Qatar as well, of course, there are some things that don’t work that need to be addressed. 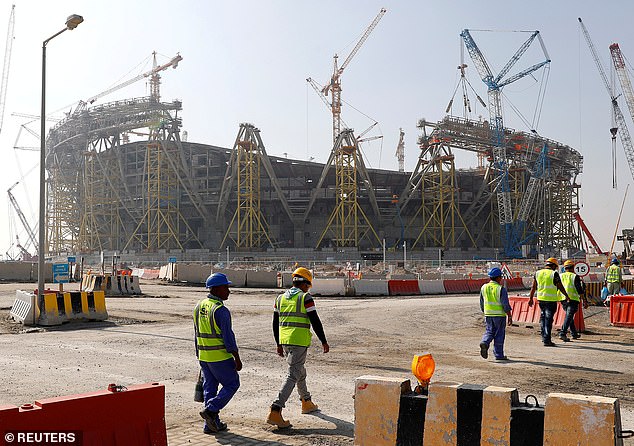 Asked about the safety of homosexual supporters travelling to the country – Qatar is ranked as one of the most dangerous places on earth to be gay – Infantino said he and the organisers had ‘confirmed’ that all were welcome.

He compared the present situation to that of Switzerland in 1954 when it hosted the tournament, when homosexuality was also outlawed.

‘Like for the workers these are processes,’ he said. ‘Of course I believe it should be allowed as FIFA president, but I went through a process’. 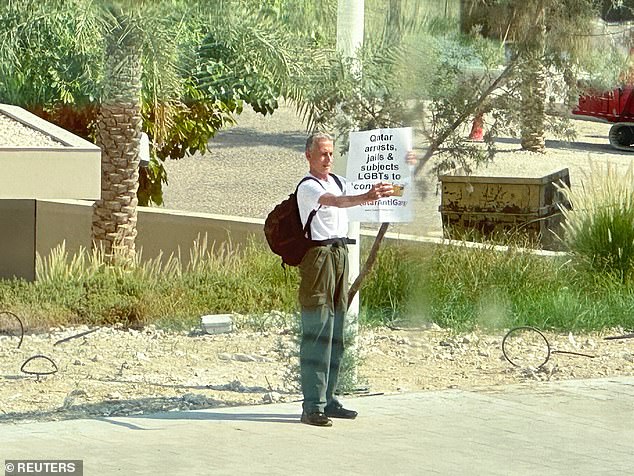 It has been reported by a number of sources that as many as 6,500 migrant workers have died in Qatar since preparations for the World Cup began. Qatar has built stadia, hotels, a deep-sea port, an expansion to the airport and an entire new metro system in preparation for the tournament.

Infantino claimed he addressed the matter of migrant workers ‘straight on’ when he arrived three years ago.

‘I came here three years ago and addressed the matter of migrant workers straight on, from my very first meeting,’ he said. 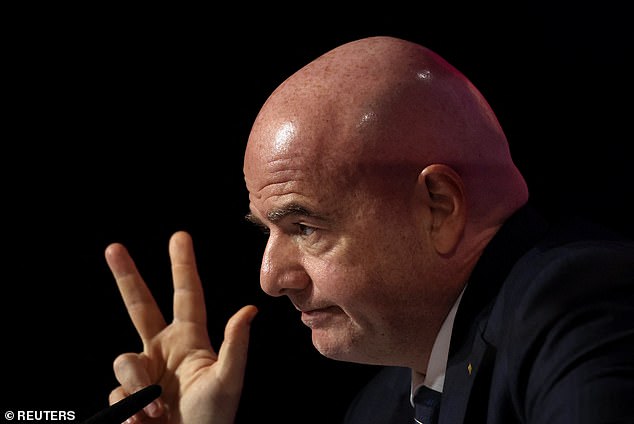 Infantino earlier this year faced criticism with human rights bodies such as Amnesty and FairSquare when he told the European Council in Strasbourg that only ‘three’ migrant workers had died. That particular number appears to come from the Qatari authorities themselves, traced back to their own Workers Welfare Progress Reports. It is a number that has been highly contested by the likes of Amnesty.

Similarly, he also told the same body in Strasbourg that FIFA’s controversial plans for a biennial World Cup could be decisive in the refugee crisis.

‘We need to give hope to Africans so they don’t need to cross the Mediterranean in order to find, maybe, a better life but more probably death in the sea. 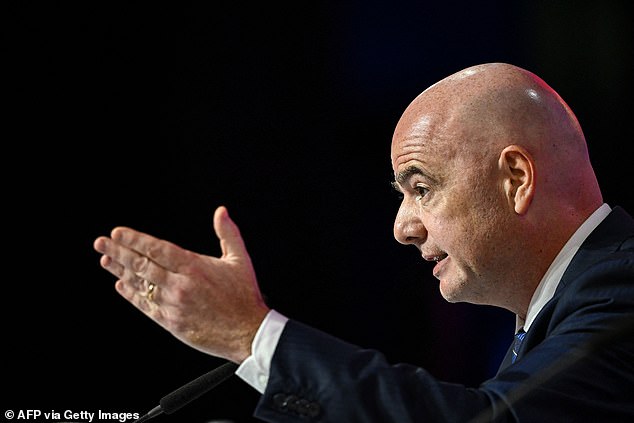 ‘We need to give opportunities and we need to give dignity, not by giving charity but by allowing the rest of the world to participate,’ he said.

Controversially, Iran – who play England at 1pm GMT on Monday – have been allowed to remain in the tournament despite widespread crackdown on protests in the country.

Mahsa Amini died on 16 September allegedly for not wearing her hijab correctly and wearing skinny jeans after being arrested by the country’s morality police – essentially, in charge of enforcing its strict laws and customs. The country denies her cause of death, saying it was due to underlying health conditions.

Over 15,000 protestors have been arrested in the country, with death penalties a distinct possibility.

Asked about whether or not a country such as Iran should be taking part, Infantino once again trotted out the line that it was ‘football’. ‘What does the world have?’ if not football to bring them together, he went on.

He went on to suggest hosting the tournament in the country. ‘If we should go with a tournament to Iran, let’s go because maybe that will change something,’ he said.

Infantino offered up ‘Palestinians and Israelis’ being able to come together as a positive reason for hosting the World Cup in the country.

‘Maybe it is just during the World Cup, but it is a door that has been opened,’ he said. 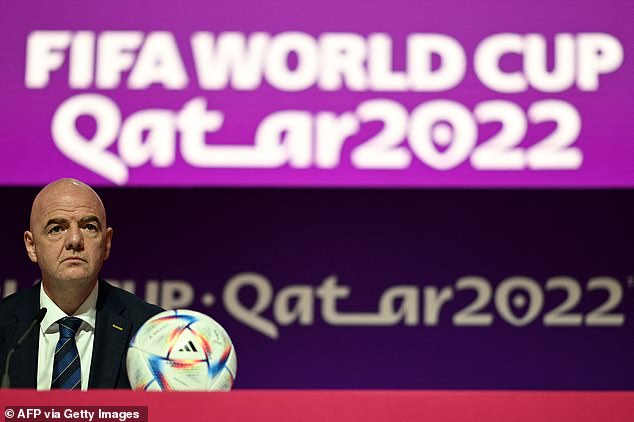 Furthermore, Infantino was asked what his feelings were surrounding the most  controversial World Cup perhaps in a generation. Looking weary at this stage, he said that ‘since 2016 we have made tangible, tangible’ progress since he came to power.

Asked to address supporters who are protesting against the tournament by not watching it, Infantino said: ‘To the fans who are not going to watch the World Cup, well, don’t watch it. What do you want me to tell them? I am convinced they will.

‘It’s like in these polls we have seen very recently…in some countries that say it’s bad to watch the World Cup because it’s in Qatar and it’s FIFA and look this bad guy. [But] privately when they go home, of course they watch it. Because when you’re a football fan, there’s nothing bigger than the World Cup. We will have five billion people watching it. Those who watch it, officially and privately, they will see the best football ever and they will see the biggest emotions ever.’ 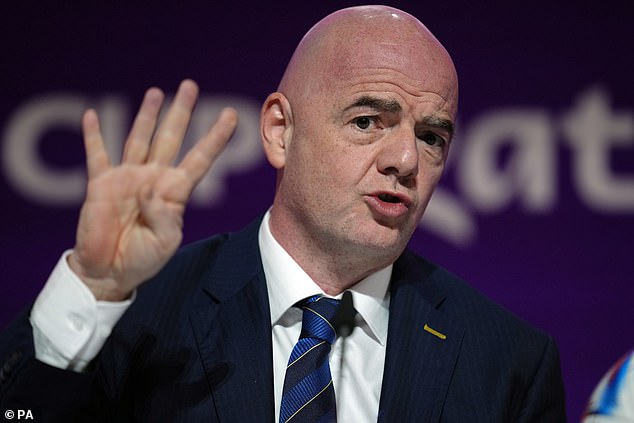 It is the latest in a series of controversial incidents that have marred the build up to the tournament. On Friday, it was reported – and then confirmed by the relevant parties themselves – that beer would no longer be sold in stadiums, potentially throwing FIFA into a major legal dispute with one of their biggest sponsors, Budweiser, with whom they have a multi-million pound contract.

It was announced beer and other alcoholic drinks would still be available in the corporate seats.

Responding to a question on the topic, Infantino said: ‘If this is the biggest issue we have … I will go to the beach and relax until 18th of December.

‘Every decision is discussed, debated and taken jointly.

‘Maybe there is a reason why in France, in Spain or in Scotland alcohol is banned from stadiums. Maybe they are more intelligent than us having thought maybe we should be doing that. I think it is never too late to change – maybe we will have to do other changes in between on other topics. When it comes to the security of people – you spoke about LGBT [people] – everyone’s security is granted,’ he said. 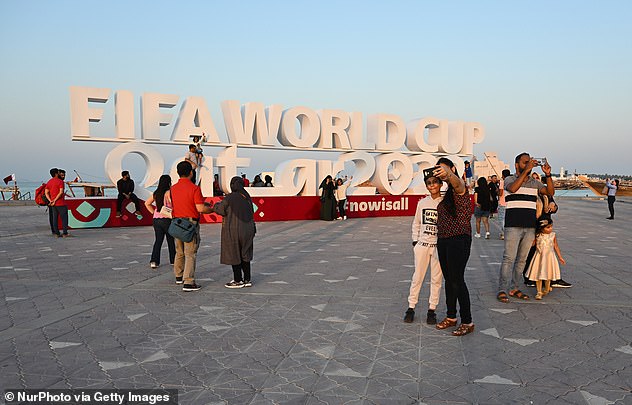 Fans who are attending the World Cup as part of a paid-for supporters programme have had their daily allowance of £60 cut, according to reports

‘Everyone’s security is guaranteed from the highest level in the country. This is the guarantee we gave and we give.’

He added: ‘I think this decision taken has brought us even closer (FIFA and Budweiser).’

Meanwhile, seemingly after a string of negative stories surrounding the ploy, fans travelling to the country as part of the Fan Leader Programme – in which supporters from each of the 32 nations were involved – have been told that their daily allowance of £60 has been cut.

According to The Guardian, the allowance was cut just as supporters were getting ready to travel to the country. Many were relying on it as their daily food and drink budget.