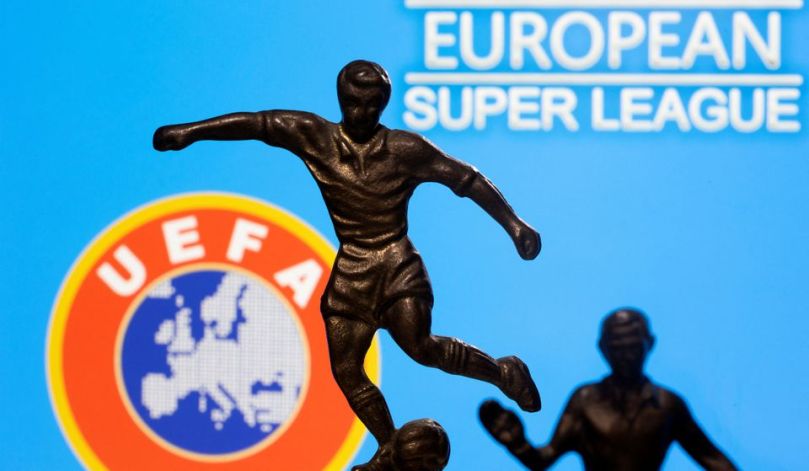 The meeting involved UEFA president Aleksander Ceferin and officials from Europe’s top leagues as they met with A22 Sports’ new CEO Bernd Reichart and its founders Anas Laghrari and John Hahn.

“In line with the unity of European football, UEFA and the participating football stakeholders once again unanimously rejected the rationale underpinning projects such as ESL during today’s discussion,” UEFA said in a statement.

“The participants took note, with surprise, the claims of A22 Sports CEO that this company is not representing any clubs in any capacity, including the three clubs who continue to openly support the project.”

Real Madrid, Barcelona and Juventus were among 12 clubs to announce a breakaway Super League in April last year but, after a hostile reaction from across the game including fans and governments alike, the move promptly collapsed.

Real, Barca and Juve have continued to push the idea, however, and after a Madrid court stopped UEFA from punishing the breakaway clubs the case was referred to the Luxembourg-based European Court of Justice.

“Our takeaway from the meeting was that the status quo is satisfactory to UEFA. This position was anticipated as UEFA has been the sole, dominant operator of European club competitions since 1955,” Reichart said in a statement.

“This monopoly structure is currently being reviewed by the Court of Justice… which is expected to deliver its conclusions in Spring 2023.” UEFA added that English clubs did not participate in Tuesday’s meeting as they were scheduled to attend a Premier League shareholders meeting.

Reichart, the former CEO of media company RTL Deutschland, was appointed as the new CEO of A22 Sports Management last month and had said that European soccer clubs were “lagging behind in terms of their opportunities”.

While the original idea for the Super League suggested it would be a closed league of rich clubs, Reichart said there would be promotion and relegation. Reichart also said A22 have been contacted by “numerous clubs” and were in dialogue with them to discuss reforms, but he did not name the clubs involved.

“A22 specifically noted that its ongoing dialogue with clubs and other stakeholders about the future of European club competitions must be carried out in an environment free from threats and other restraints,” it said.

“In this regard, A22 requested that UEFA refrain from such activities to allow clubs and others the freedom to exchange ideas about important reforms. UEFA provided assurances that this would be the case.”