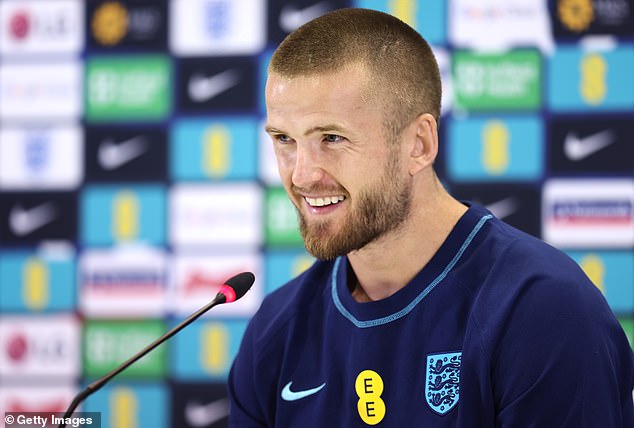 ‘I’ll play in goal if I have to!’ Eric Dier claims he would play ANYWHERE if called upon by Gareth Southgate – and would even play as a goalkeeper for England at the World Cup

England defender Eric Dier joked that he would play as a goalkeeper if called upon by Gareth Southgate during the World Cup.

The Tottenham star was speaking ahead of the Three Lions’ World Cup opener against Iran on Monday.

‘But I’ve played in that position and under Pochettino when I played for Tottenham in a back five, so it wasn’t a position that was completely new to me. I think I can play in any position really in defence.

‘I’ll play in goal if I have to – it’s a World Cup! I’ll take whatever chance I can get. I feel completely comfortable in any position in defence. I believe in myself to play anywhere.’

Meanwhile, Dier said that it was a ‘unique’ situation for them, though admitted that the quick turnaround from the ‘end’ of the season to the start of the tournament was ‘quite nice’ for the players.

‘Yes, it’s obviously a unique situation for us. It’s my third major tournament with England and obviously the first time in this situation,’ he said.

‘In some ways for me it’s quite nice, not for the coaches and my managers tactically and that aspect of things, it’s not ideal for them as they’d probably like to prepare us a bit more, but from a player’s point of view the quick turnaround is actually quite a nice thing.’

Dier said that he was quite ‘impatient’ and now that they were out there, could not wait to get going.

’I’m quite impatient so it’s nice to be getting started. There are obviously other aspects that aren’t so great, players missing out to injuries which would have usually kept them out of a tournament. Now that we’re here, I’m very excited to start.’