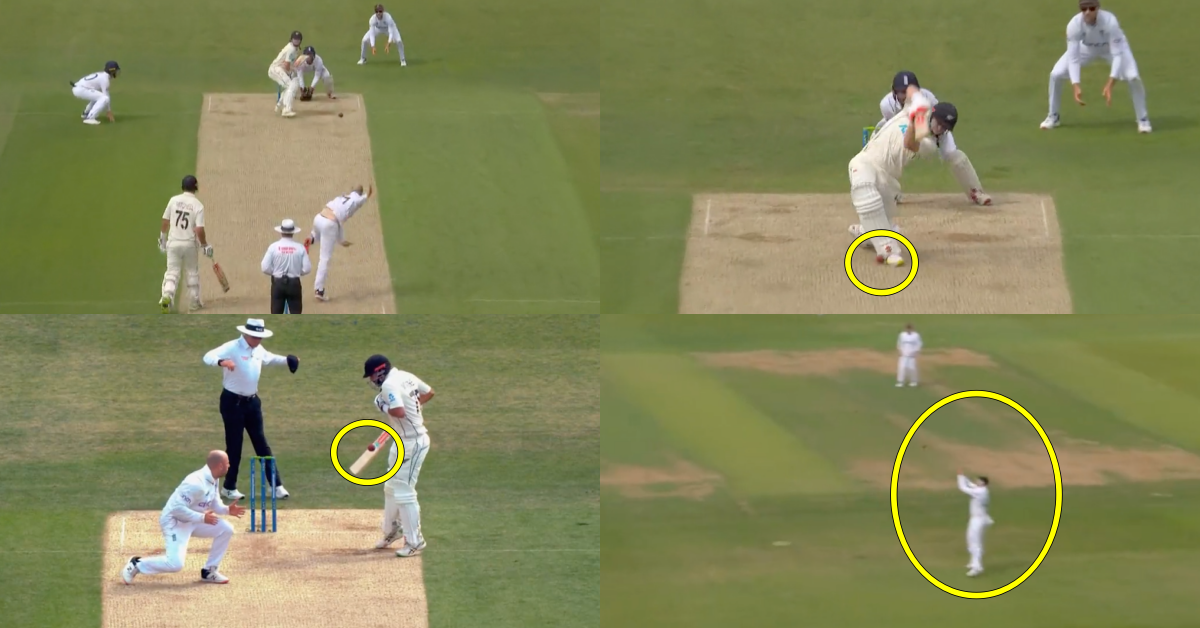 At Headingley, Stuart Broad and Jack Leach both had wickets in their opening overs before Broad came back for his second stint and claimed Kane Williamson as NZ’s captain poor run with the bat continued.

After deciding to bat first, the visitors were in trouble at 65 for 3 before lunch, and Devon Conway and Henry Nicholls were tasked with boosting their team’s chances.

Just after lunch though, Jamie Overton got his first Test wicket as Conway dragged one onto his stumps. Nicholls and Daryl Mitchell were trying to put things back on track but as it looked that they would be able to do so Nicholls got out in the bizarre fashion in the last over before tea.

Nicholls never really looked comfortable as he was trouble by Matt Potts. He was struggling to score. The shot which he actually middle accounted for his dismissal.

Nicholls moved down the track while playing a full delivery from over the wicket by Jack Leach and drilled it well wide of the bowler. But the ball was closer to the non-striker. Daryl Mitchell moved away but did not remove his bat off the path in time. The ball struck  Mitchell’s bat’s sweet spot, flew over an evasive Richard Kettleborough, and landed directly in Lees’s hands at mid-off.

Leach was surrounded by his teammates as they celebrated an odd dismissal with the last ball before tea, as he has no understanding of what just happened. Nicholls has had some difficulty lately, but nobody couldn’t have imagined what would happen on the 99th ball that he would face.

NZ right now are in trouble with half their side gone. They are already 2-0 behind in the series.

Also Read: India vs Leicestershire: Watch – Prasidh Krishna Gets Tips From Virat Kohli, Dismisses Shreyas Iyer For A Duck On The Very Next Ball