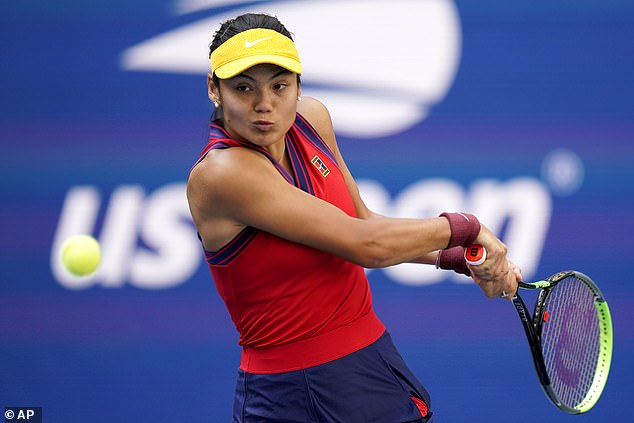 ‘Emma Raducanu is an actual superstar’: Social media reacts as British teenage star reaches the US Open quarter-finals after ANOTHER astonishing performance

By Matt Verri For Mailonline

Excitement towards Emma Raducanu reached fever pitch at Wimbledon earlier this year, and it shows no sign of slowing down as she marches through the US Open.

The 18-year-old Brit made it yet another straight-sets victory as she bulldozed her way through Shelby Rogers 6-2, 6-1 to reach the quarter-finals at Flushing Meadows.

She has more than risen to the challenge in her first two Grand Slams, and social media was once again alight after Raducanu’s latest win. 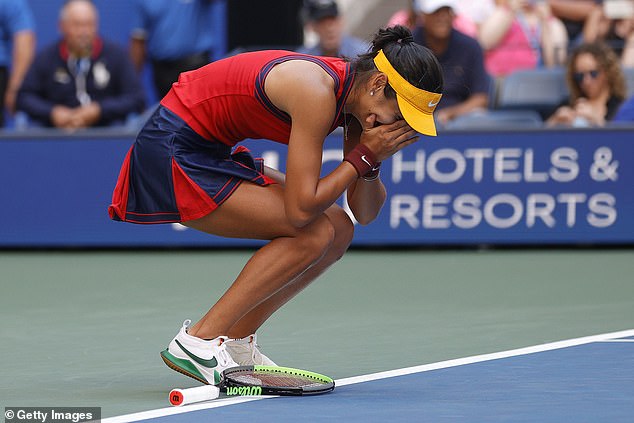 Piers Morgan tweeted: ‘Wow…. ⁦ Emma Raducanu⁩ just bombed her way into the US Open 1/4 Finals.. She said she was particularly pleased to have overcome early nerves. Excellent.’

Annabel Croft also hailed the teenager, and believes few in the tournament will want to face Raducanu.

Croft said: ‘Another stunning performance from Raducanu to make her first QF of a slam – ground strokes and returns on fire and so at ease on a big stage!. Blitzes last 2 opponents and no doubt sending few shockwaves thru locker room!’

Mayor of London Sadiq Khan tweeted: ‘What a result. London’s very own Emma Raducanu becomes the youngest British player to reach the quarter-finals of the US Open! Keep going Emma – London is cheering you on.’

Another said: ‘Emma Raducanu is going to be a superstar!!! Would not be surprised if she’s one of Britain’s top sport stars in 3 years. Incredible performance taking place right now in the USOpen.’

Raducanu is yet to drop a set in New York, first through qualifying and now in her run to the last eight of the main draw. She faces Belinda Bencic next.

The teenage sensation will rise through the rankings as a result of her run, and has already proved to be a hit with the spectators in New York.

Former British No 1 Jo Durie said: ‘From 0/2 to 6/2 6/1 Emma Raducanu shows great nerve to reach the QF…..quite sensational wow. Who knows what could happen next.’

@sbarabhuiya tweeted: ‘I’m absolutely buzzing for Raducanu. Coming back from 2-0 down to win 6-2, 6-1 and through to the quarter finals of the US Open.

‘Not only is she calm and collected on court but she’s articulate and very well liked off court. Amazing to see in such a young player.’

‘I’m honestly in awe of Raducanu. What a win!!’, another added.

@BenPearceSpurs posted: ‘Amazing again from Emma Raducanu. So exciting. And the perfect time for her to explode onto the scene, taking the baton from Andy Murray.

‘Whatever happens this week now, it looks pretty clear she’s going to be challenging for a lot of titles for a long time.’