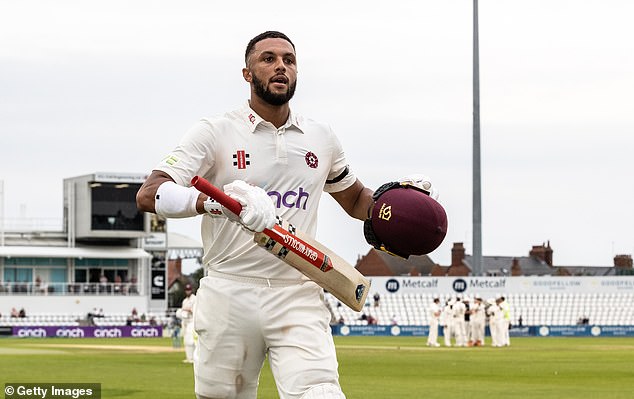 When a highlights package of Emilio Gay’s 145 for Northamptonshire against Surrey did the social-media rounds last week, as experienced a judge as David ‘Bumble’ Lloyd tweeted: ‘I’ve seen enough.’

There were shots all round the wicket, including a string of powerful cover-drives off West Indies’ Kemar Roach and some ferocious cuts. Every stroke had an economy of movement. Gay is 22.

Almost as excitingly, he is an opener, and English cricket could do with one or two of those. 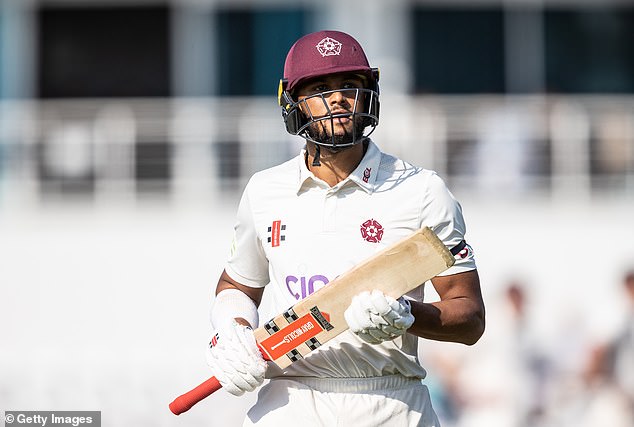 His timing has been sweet in another way. Northamptonshire are in the top tier of the county championship for the first time in eight years. With live streaming increasing the reach of the domestic game, this smallest of clubs are more visible than ever.

‘The goal was to make a little bit of a name for myself and have that breakthrough season with some scores against the best bowlers in the country,’ he tells Sportsmail. ‘I wanted to cement my place, and that’s exactly what I’ve done.’

The innings against Surrey came two months after a century to help set up victory over Kent on a turning pitch at Canterbury. More recently, he pummelled 131 off 117 balls in a 50-over game against Lancashire.

For lovers of omens, Gay is tall, left-handed and a product of Bedford School — just like Alastair Cook, whose advice he has already sought as he looks to take the next step and play for England. 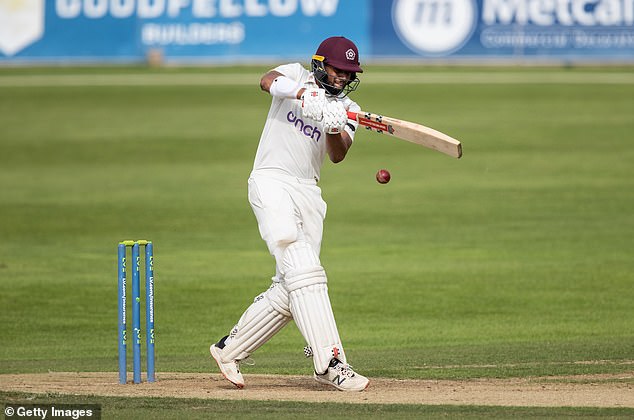 Cook said his technique was in good order, instead emphasising the mental side of the game. Gay was grateful: ‘I wanted to tap his brain about converting scores, dealing with setbacks or low scores, and how he stays level.’

Run-scoring, though, is not their only shared passion. When Gay said he enjoyed an early-morning jog — by which he means 3 or 4am — Cook revealed he used to do the same, for similar reasons.

‘It’s to get out of a comfort zone,’ says Gay. ‘The last thing I want to do is get up at four and go for a run. But I want to stay fit, and it gives me a bit of an advantage — working while other people are sleeping.’

Often, he would follow the jog with an early net with his dad, who would need to leave for work by 6.30.

The diligence seems ingrained. Because he admired the trigger movements of Australian Test star Marnus Labuschagne, Gay sought him out after a championship match against Glamorgan last season.

He has also studied the lateness with which New Zealand captain Kane Williamson plays the ball in English conditions. 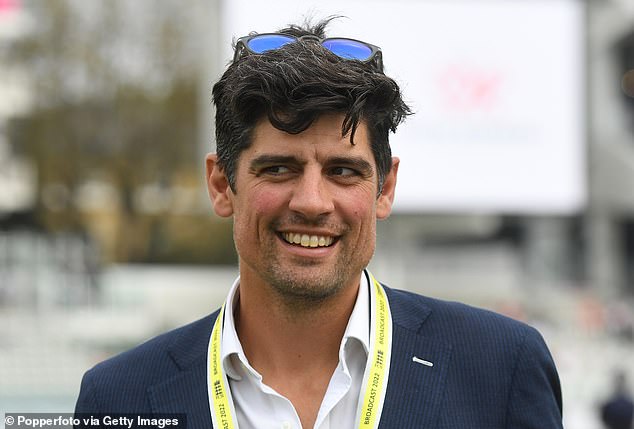 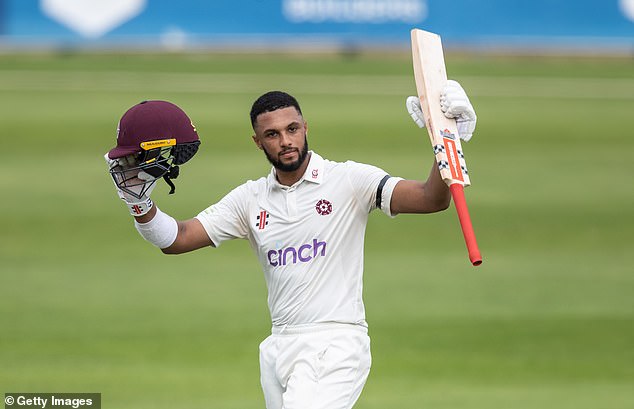 He currently averages 30.48 in with the bat in first-class cricket but that is on the up

He believes he is addressing any perceived weakness against the short ball because of the quality of Division One attacks, allowing him to hone his cuts and pulls. Above all, he does not lack confidence.

‘Opening the batting in England isn’t easy, but I think my game is suited to it,’ he said. ‘I can score quite freely and I’ve got good judgment around off stump. Technically, I think I’m good enough.

‘From when I can remember, the goal was to play Test cricket for England. Breaking into that Test team is something I’ve had my eye on, 100 per cent. It’s that balance between making your name so that you get into those conversations, and staying in the present, to win games for Northamptonshire.’ 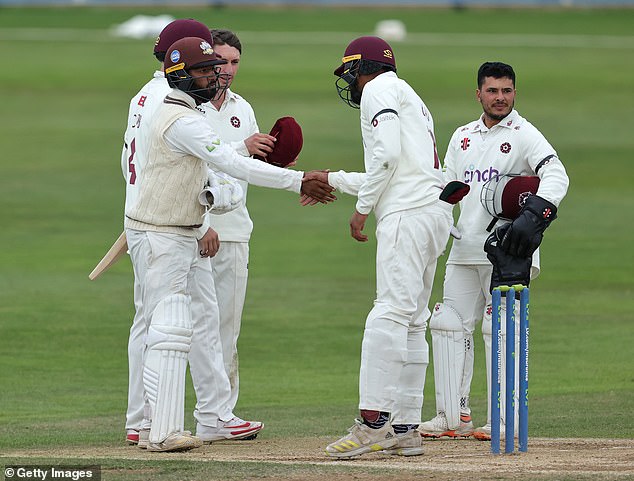 Until recently, county cricketers with Test aspirations did not linger at Wantage Road: Graeme Swann and Ben Duckett both moved up the M1 to Nottingham, while Olly Stone headed for Warwickshire.

But with two four-day games left this season, Northamptonshire are fifth — and if they stay there, it will be their highest finish since 1995.

As Gay suggests, the idea that an England call can only be achieved elsewhere is ‘outdated’. He adds: ‘You’re playing Surrey and Lancashire and Yorkshire. That’s all that matters.’

As it happens, he might already be an international cricketer, if his county team-mate Gareth Berg had anything to do with it. Berg captains Italy, and found out that Gay’s mum’s family hails from Montefalcione, near Naples. (His dad is from the Caribbean island of Grenada.) 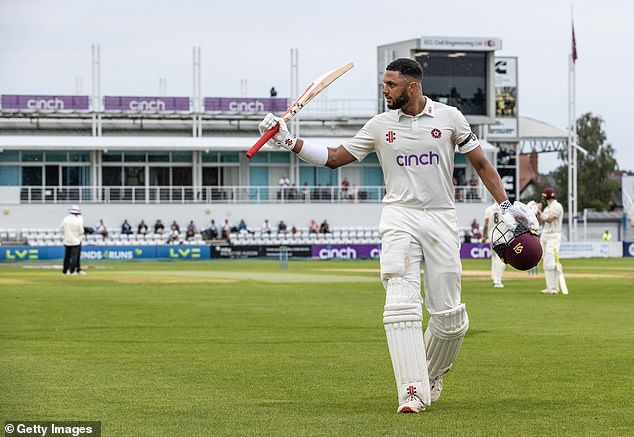 ‘My nonno (Italian grandfather) didn’t know anything about cricket,’ says Gay. ‘It took him a while to work out what a hundred was, and whether it was a good or a bad thing.

‘Gareth has been trying to tap me up, but with the season being so busy it’s not been realistic. Maybe if there was a gap to play some cricket for Italy and get a bit of exposure.

As long as it didn’t affect my chances of playing for England, I don’t see why not. My goal is to play Test cricket and dominate the county season as much as I can.’

The conversation has started. Now Gay needs his bat to keep doing the talking.