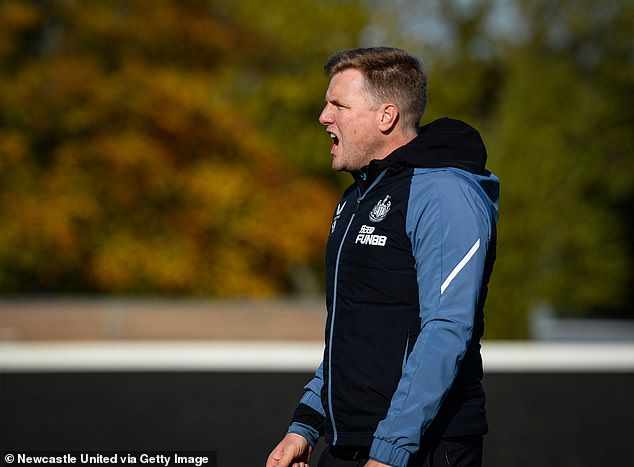 As Eddie Howe approaches his one-year anniversary as Newcastle manager, this must be the most transformational 12 months in the club’s history.

They were second bottom with no wins in 11 when he arrived. Now, remarkably, they’re fourth and rubbing shoulders with the big boys.

They are playing the Premier League’s most effective football and total unity exists between supporters and the players.

Looking at the team from last weekend’s 2-1 win over Tottenham, I don’t think it would be unfair to say, other than Bruno Guimaraes, few of these individuals would walk into rival top-four clubs.

But as a collective, these 11 individuals have become an outstandingly organised team and they beat a Spurs side that had won their last eight on the spin at home.

That organisation starts at the back. Goalkeeper Nick Pope and Newcastle’s defenders didn’t take risks with Tottenham’s pressing. They played long passes into the forwards, who knew to look out for balls over the top, which we saw when Callum Wilson opened the scoring.

Kieran Trippier, who has covered more ground than any other Newcastle player this season, is key to Howe’s system. When they have possession, Trippier pushes forward, leaving a back three of Fabian Schar, Sven Botman and Dan Burn — a very assured and calm trio of defenders. 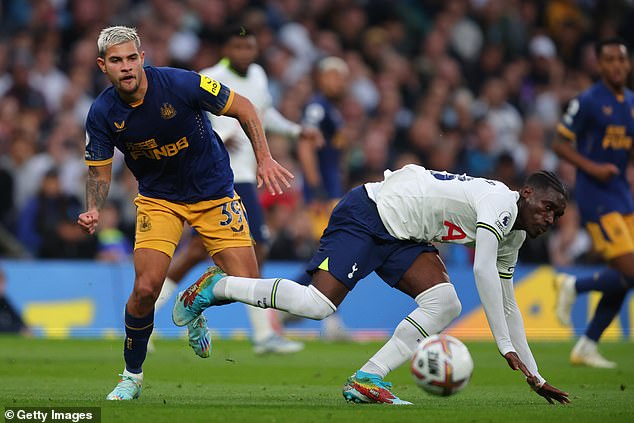 When Newcastle don’t have the ball, Trippier races back to reform the back four. Defensively, I like the way the midfield and forward lines stay compact. They move up together as a team and back together.

Added to their individual determination and desire in duels, it goes some way to explaining why Newcastle have only conceded six goals from open play this season, the fewest of any Premier League side. 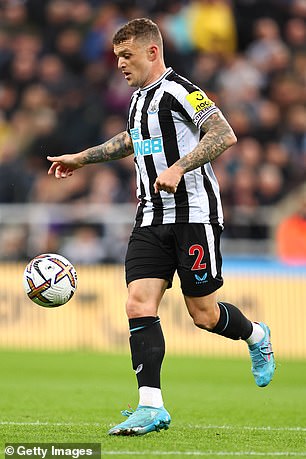 In midfield, Sean Longstaff, Guimaraes and Joe Willock are attack-minded, tenacious and intelligent in the way they rotate.

The classy Guimaraes uses his range of passing to spread play and link up with the forwards. Newcastle’s front three of Miguel Almiron, Wilson and Joelinton worked well against Tottenham, too. Joelinton is a grafter and Wilson is a predator, but special praise for Almiron. He embodies the sea change at Newcastle more than anyone else.

With six goals this season, he’s got his wings and is flying. His pressing is so infectious, it encourages others to follow, making him the trigger for Newcastle’s press.

Howe’s side rank first in the Premier League for turnovers in the final third and that was how they scored their second goal against Tottenham. They hurt Brentford that way in their 5-1 win, too, when they went man to man and Almiron angled his run to block Ethan Pinnock’s pass to Vitaly Janelt before scoring.

Tremendous credit must go to Almiron for that turnaround, but also his manager for how he has made it all possible and totally turned the table upside down for Newcastle. 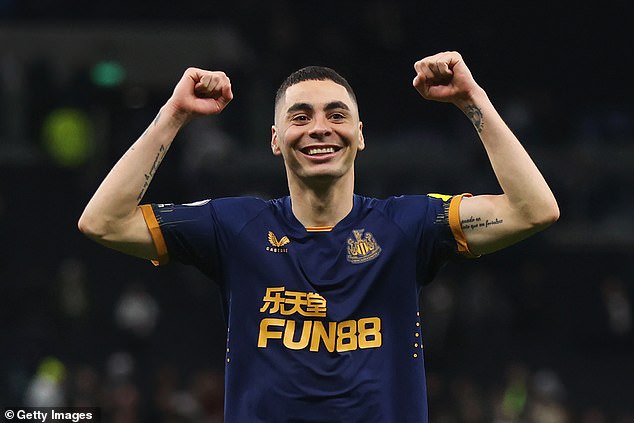 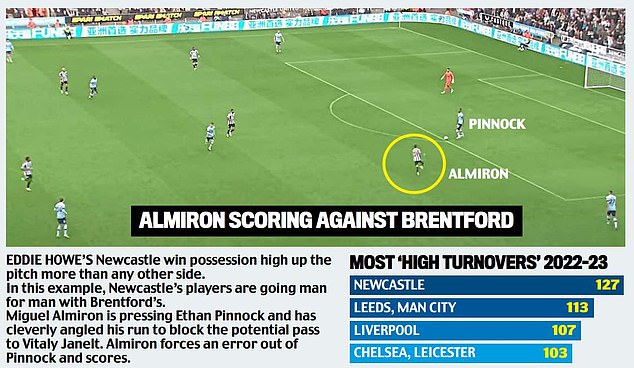 Unai Emery arrives after an eventful week at Aston Villa

A week is a long time in football. Aston Villa sacked Steven Gerrard, beat Brentford 4-0 under caretaker Aaron Danks and now have a big name in Unai Emery arriving. 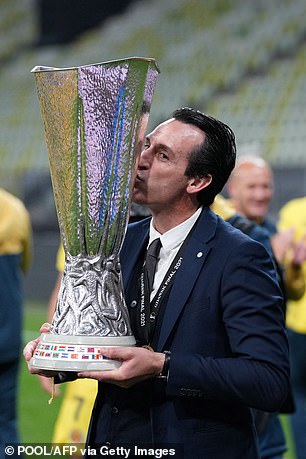 The Villa faithful, who wanted Gerrard gone, played their part in supporting a fresh start as Danks made changes.

Gerrard’s captain John McGinn was dropped, Leander Dendoncker made his first start of the season alongside Douglas Luiz in a midfield two.

Ollie Watkins moved from the left to the right with Leon Bailey operating on the opposite wing, Emi Buendia played off the front and Danny Ings led the line as a lone striker as Villa stormed into a 3-0 lead inside 14 minutes. Newcastle at St James’ Park will be a totally different test to Brentford though.

Villa have only taken two points from a possible 18 away from home this season. They are now in a similar situation to the one Newcastle found themselves in last season.

Emery, who incidentally turned down the Toon job, will be hoping he can turn around Villa’s fortunes as successfully as Howe has at Newcastle in the last year.