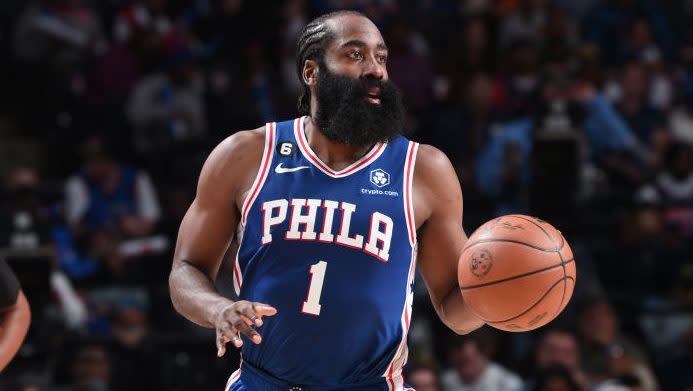 1) The 76ers pick up first win. So is everything good now?

Maybe P.J. Tucker should yell at his teammates more often.

Philadelphia picked up its first win of the season Monday against Indiana. Sure, it took the 76ers facing a Pacers team playing its third game in four nights, but when the schedule maker hands you a win, you take it and say thank you. Philadelphia did just that, getting a big night from James Harden — 29 points, 11 assists and nine rebounds — on their way to a comfortable 120-106 victory over Indy. You know it’s a good night in Philly when Harden breaks ankles and does everything but the shimmy.

There were a lot of positives for Sixers fans: Philadelphia was firing more from beyond the arc (43 3-point attempts), Joel Embiid pitched in 26 points on 8-of-13 shooting, and the bench that struggled early stepped up with George Niang adding 16 points and DeAnthony Melton scoring 11. It was an all-around improved effort.

So everything is good with the 76ers then?

Philly was never as bad as some wanted to believe with the 0-3 start, but they have a lot of work to do to be the contenders many people predicted they could be. The flaws and concerns with the roster and how it is coming together early are still there.

The ball movement was improved against Indiana, but there were still too many possessions of Harden pounding the ball into the ground and starting the offense late in the clock. It still seems like Embiid and Harden are taking turns, not playing with and off each other. Tyrese Maxey is still looking for his shot to start the season (3-of-11 against the Pacers). Still, all those issues can be worked out over time. Philly is a middle-of-the-pack offense after the first week, but give it time and it will climb up the league ladder.

The bigger concern is defense. There will always be challenges defensively for a team that plans to play Maxey and Harden heavy minutes together in the backcourt. The problem is a slowed Embiid to start the season has not been able to cover for them protecting the rim, and the wing defense has been an issue. Unlike the offense, which just needs time to meld, Doc Rivers needs to find schemes and energy to pick up what has been a bottom-10 defense to start.

Philly has too much talent to struggle for long, it will find the wins. Whether the 76ers find their way up to contender status may take longer to determine.

Watching Kevin Durant play basketball is sublime. Like listening to Thelonious Monk play the piano or Meryl Streep on the big screen, we know greatness when we see it, and Durant is unquestionably one of the greatest scorers and players the game has ever seen. In this game, a Durant bucket moved him past Alex English (25,613 points) into 20th place on the NBA’s all-time scoring list.

But are Durant’s Nets a good team? Not right now. Not the way they are defending to start the season. Through three games, Durant leading a strong offense has covered up the league’s worst defense.

Durant got help from Kyrie Irving on Monday night (both scored 37 points) but it was not enough as the Grizzlies put up 134 behind 38 points each from Ja Morant and Desmond Bane. Brooklyn fell to 1-2 on the young season with the 134-124 loss to Memphis.

No team has a defender who can stay in front of Ja Morant, both Nic Clayton and Royce O’Neal got torched in the role, but the help rotations were slow to nonexistent much of the night.

There were mistakes on switches leaving Memphis shooters open multiple times in this game. However, the biggest issue: The Grizzlies simply outworked the Nets all night long, particularly on the glass.

Ben Simmons‘ start to the season can be summed up this way: He has more personal fouls than points. Both he and coach Steve Nash talked about him still shaking off the rust and finding his footing to start the season. Okay. But his unwillingness to shoot is something other teams will exploit.

It’s just three games, far too early to draw sweeping conclusions about the Nets. But in the NBA defense starts with effort, and the Nets have played with the energy of a team that feels entitled to wins. The league doesn’t work that way. The Nets must find some grit and toughness in their identity to compete with the best in the East.

As a palate cleanser, here’s your ridiculous Ja Morant highlight of the night.

3) Are the 4-0 Portland Trail Blazers for real?

Let’s get the important stuff out of the way first: Damian Lillard admitting he has never been to the Oregon coast is shocking and will cost him points with Oregonians — he’s built up enough loyalty points to get through this, but it’s going to come up. A lot. And for the record, the Oregon coast is in my top 10 “places you need to visit in the USA.” Just go, Dame.

As for the Trail Blazers…

They just beat the Clippers and Nuggets on what is one of the toughest back-to-backs in the league — the Clippers are deep and physical, and then to travel all night, deal with the Denver airport (if you know, you know), and have to play a game at altitude against the two-time MVP is just brutal. The Trail Blazers swept both ends of the back-to-back, and outplayed the Nuggets in the second half when their legs should have been spaghetti. Throw in a Portland win over Phoenix this season, and this team might be for real.

Damian Lillard is back — his explosion, his extension at the rim when he finishes looks like the guy from five years ago — and a night after dropping 41 on the Clippers he had 31 against Denver. He’s gotten help from Anfernee Simons, who has played up to his new contract and had 29 in Denver (but Blazers social media, the “Anferno” nickname… you can do better).

Portland revamped this roster in the offseason, and they added more athleticism around Lillard — so far that has worked. This team just meshes well. Portland has been getting it done on both ends this season, and while it’s early they have a top-10 offense and defense.

Can the Trail Blazers sustain this for 78 more games? Where do they fall in the West’s hierarchy? It’s a long season and we will find out. But one week in, this team looks for real.